Are We Headed for an Economic Correction? Bay Area Experts Weigh In 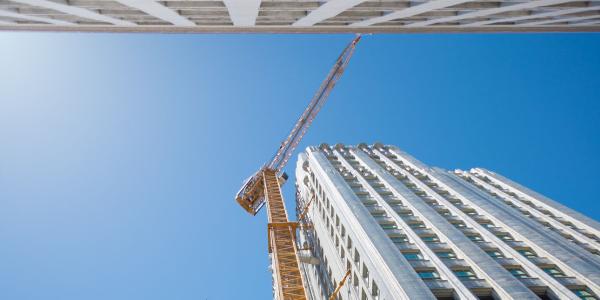 How will national and international trends — the slowdown in China, low gas prices, changing interest rates, the uncertain outcome of the presidential election — affect the Bay Area? What will the impact be of conditions unique to California and our region, like the unaffordability of housing and the presence of a booming (but historically volatile) tech sector? Are we in for a correction or recession?

Every year, SPUR’s Municipal Fiscal Advisory Committee gathers expert economists to try to answer these kinds of questions. The expertise of independent economists and experts from key sectors — including real estate, hospitality and retail — helps the city staff develop revenue projections for the City and County of San Francisco’s budget.

Here’s a look at what they see ahead.

The U.S. and California have reached “full employment”; Bay Area growth will slow.

The big economic story nationally is that consumer confidence is back. Our gross domestic product — all the goods and services produced by American companies — is now growing by between 2.2 and 2.9 percent per year, driven by Americans buying things again: houses, cars, goods. Household consumption will drive 70 percent of the economy over the next two years.

The Bay Area will continue to grow slightly faster than the rest of the country, but our growth rate will slow. This tends to be the trend as an economy moves from high unemployment to low unemployment because the area no longer has the remaining labor force to support faster growth. Economists are describing California and the U.S. economy overall as having reached “full employment.” Though, as we know, the recovery has been distributed unevenly, and to a certain extent, the term “full employment” belies the fact that many people have given up ever returning to work and others are underemployed.

San Francisco’s job growth rate continues to outstrip that of the Bay Area, which is outstripping the country. This has been the trend for the last several years, which may make it seem the norm, but it’s worth remembering that from the 1960s until 2006, San Francisco was a steadily declining share of regional jobs. Now, in good times and bad, the city is gaining and reestablishing its primacy as a jobs center. This is a significant reversal for the city’s relationship with the region. 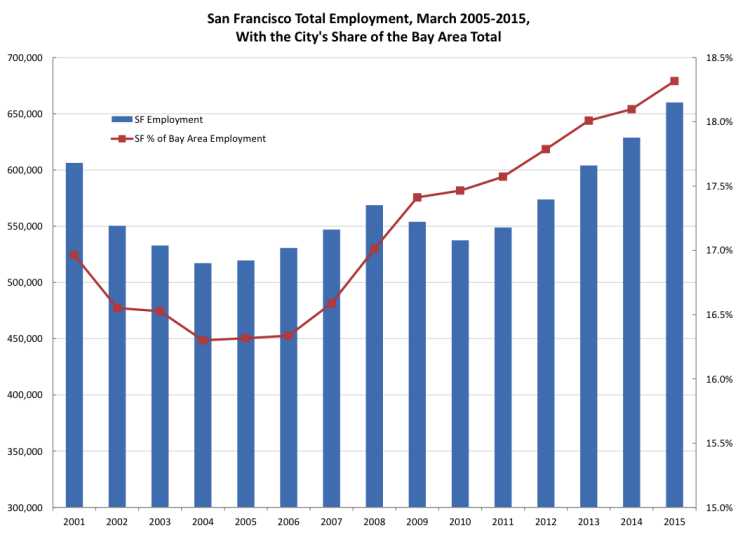 Employment growth is occurring in every sector in San Francisco. And of course, the industries growing the fastest are professional services and information jobs, which encompass many of the jobs we refer to as "tech."

If you bring San Mateo County jobs into the equation, the San Francisco-San Mateo County metro area tech sector has been growing at a rate of 15 percent a year for the past two years. This is an astonishing number, even though it’s to an extent skewed by the growth of a few exceptional companies. Tech is according to our city’s Chief Economist, “the tail that wags the dog of our entire local economy,” so any change to the fortunes of the tech sector would have far reaching ramifications. 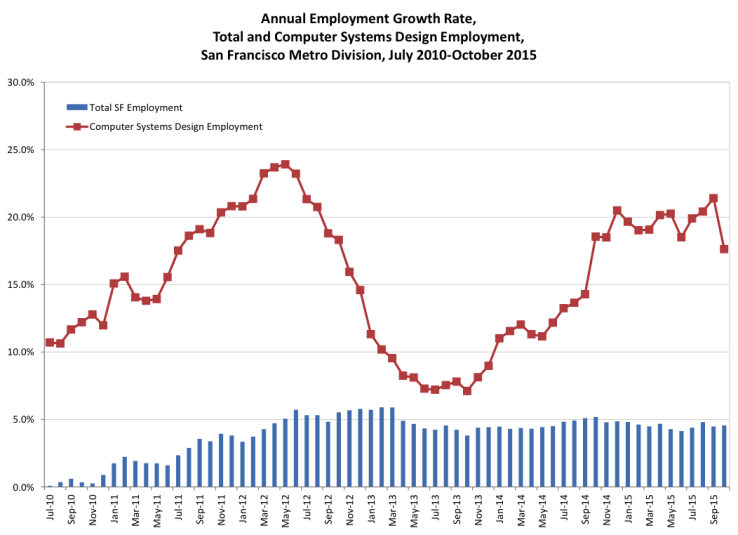 For forecasting what's next, keep an eye on the NASDAQ

Record setting jobs numbers in San Francisco and in the tech sector are a source of marvel at the MFAC gathering each year, but they don’t really tell much about the future. If you want to predict what is going to happen with the San Francisco economy, jobs numbers don’t help you. Employment is a lagging indicator. Businesses hire in response to economic changes, rarely in anticipation of them. Commercial real estate prices are a bit more leading, because they signal the sense companies have of what their needs will be in the future. But the best indicator for the Bay Area is the NASDAQ stock exchange. For the last 25 years, the performance of the NASDAQ stock index has tracked private sector employment trends two to three quarters ahead. 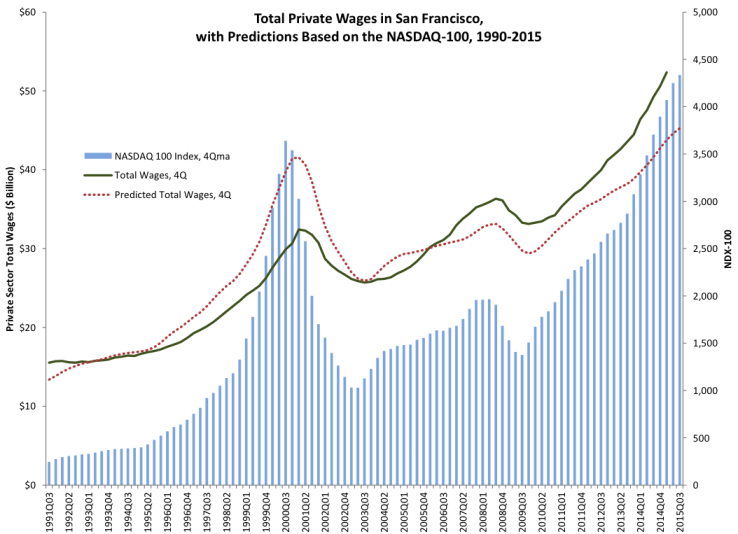 San Francisco tech sector includes many more large, stable, profitable companies these days than 15 years ago in the dot com heyday when many companies’ valuations were wildly out of alignment with their earnings. But it is still true that many of San Francisco’s major employers are not profitable and/or are privately held companies highly reliant on venture capital. These companies – which account for close to 80% of our local tech sector, require constant new investment to pay salaries and rent and support growth. They are thus vulnerable to sustained bad news in the stock market. If investment stops flowing, they stop growing. 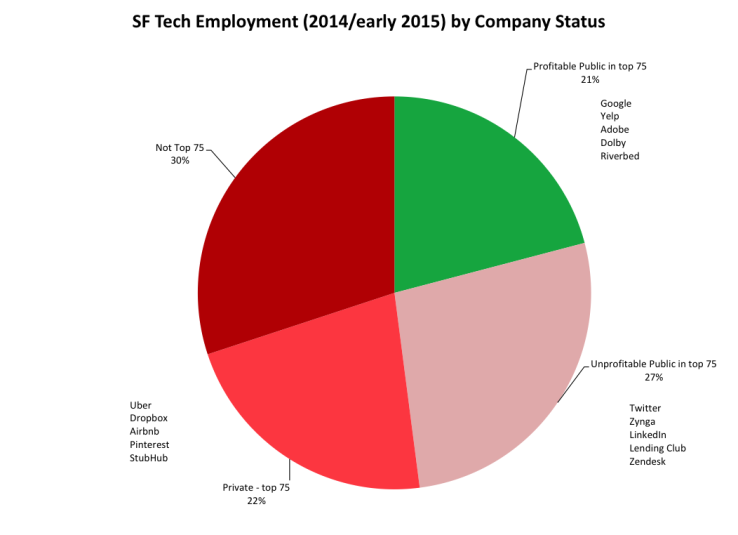 If the NASDAQ starts to plateau or trend negative for a sustained period, it’s a likely bet that it will have ramifications in the San Francisco tech sector, which will in turn affect the city’s overall private sector employment.

Will there be a recession?

After four years of being premature, none of the gathered experts were willing to quite predict a recession in the near future. But they had a lot of ideas about how one could come about.

On the national stage, American consumers are driving this expansion, and if they stop buying, then we get a slowdown. Volatility in China and the Middle East, the inauguration of a new president and uneasy news of unicorns and bubbles (even if just rumors) could trigger households to become more cautious and conservative with their spending.

And local risks are rising. Many local companies employing many people are not profitable and rely on continued investment that may begin to slow down. Infrastructure constraints – lack of office space, scarcity of affordable housing and transportation congestion – are becoming more real by the day and will lead to declining growth regardless of macroeconomic trends. There are signs that this is happening already. For one: while jobs are growing, the resident labor force is not. What this means is we are adding jobs faster than we can add space for people. This points to housing and infrastructure constraints and their increasingly apparent result: People can’t afford to live here. The number of workers commuting from outside the entire Bay Area region (several travel hours away) to jobs in our employment centers is growing. A growing number of major companies have instituted hiring freezes in the Bay Area, which they attribute to the constraints and costs to adding employees here becoming too high.

What do these projections mean for the San Francisco budget?

From an economists perspective, San Francisco has reached new heights. We have a thriving export industry that is driving record local employment and attracting talented people from all over the world. Investment in the city is yielding a building boom that is adding to the city in myriad ways - iconic buildings, a transformed downtown transit district, a new subway line, new bike lanes, new parks and places - that will be appreciated for generations to come. The city is flush with funding for public services.

But we face a growing reality that the city and region’s prosperity is being hobbled and hollowed out by our own choices in the areas of housing and infrastructure. We have allowed our city to become the most expensive place in the country to live and work in. Even our leading businesses can’t find or afford space to expand and can’t pay their workers enough for them to afford to live here. The high cost of doing business in the city has choked out middle-wage jobs and contributed to a hollowing out of the middle class. Commutes are taking longer than ever — both because of unprecedented congestion and because the lack of affordable housing in the region means workers are now commuting in from outside the 9 county Bay Area.

This scenario we are living in does damage to our long-term goals for diversity, sustainability and quality of life. The good news, is that our good economic fortune can make the wheel spin the other way, if we set good policy: Make it easier to add housing; make it easier to add jobs in places near transit; make the generational investments in housing, streets, parks, transit system, health system and public buildings that are vital inputs to long-term prosperity for the region’s residents and make the high cost of living and working here worth it.

Thank you to the City’s Chief Economist, Ted Egan, for his graphs and to the San Francisco City Controller’s Office and the many consultants who contribute their expertise to help San Francisco develop its budget.