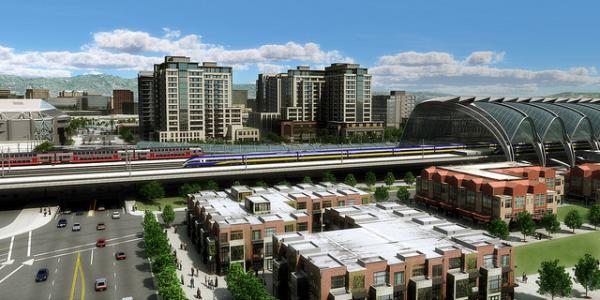 A rendering of what the future Diridon Station area could look like. Image courtesy of BeyondDC.

A good plan has the green light to proceed. Now it’s all about implementation.

Last month, San Jose’s City Council unanimously approved the Diridon Station Area Plan (DSAP) and its related environmental documents after a five-year process. Located on the western edge of Downtown San Jose, Diridon Station is already a transit hub for the region, serving Caltrain, Amtrak, Altamont Corridor Express and other heavy rail lines as well as VTA’s light rail and buses. But plans for major transit investments — high speed rail and BART — are set to completely transform the existing station and the area around it.

As we’ve written before, the DSAP plans for almost 5 million square feet of office space, 2,600 units of housing and 420,000 square feet of retail. The area includes the Sharks’ existing home at SAP Center as well as a possible location for an A’s baseball stadium (or maybe not). And it’s just on the other side of Highway 87 from the core of downtown, with plenty of opportunity sites to accommodate growth.

The Diridon Station Area Plan is strong in many dimensions. It focuses dense mixed-use growth in a transit-rich infill location. It includes much-needed improvements to the pedestrian and bicycle network and guidelines for an active and attractive public realm. And it commits to better planning around transportation management for the area.

During the approvals process, SPUR provided written and verbal testimony in support of the overall plan with recommendations on how to move forward. And on June 17, the plan and its associated documents were adopted with the support of the City Council.

Among the alterations adopted at the June 17 meeting was a motion to set aside 15 percent of residential units for affordable housing – a proposal that, prior to this meeting, was simply a “policy goal.”

Other significant amendments included a proposal to study the possible benefits of a transportation management agency and to keep open the option of daylighting Los Gatos Creek, a project that, while projected to be expensive, received enthusiastic public support. The council adopted these along with a number of other small changes.

SPUR is pleased that the DSAP has been adopted, but proper implementation of the plan will be crucial to the area’s success. There are many details that, if implemented poorly, will not result in the plan’s outlined intentions to create an active and attractive place, build a cohesive and integrated transit center and maximize the development potential that should come from such a transit-rich hub.

Without vigilant commitment to the plan’s principles, there are many pressures that could result in a weakened vision for the area, such as lower density, an unbalanced mix of jobs and housing, and inattention to urban design and public realm principles. A tremendous amount of coordination and collaboration will be required among the city, the transit agencies and other stakeholders in order to make the right land use and placemaking decisions for the benefit of the overall community.

SPUR plans to work closely with city staff, the transit agencies, local advocates, developers and other partners to ensure that actual project development and transit infrastructure builds on the good groundwork that has been laid. It is key to the plan’s success that we not only connect places in the plan but also connect people through the process.