By Julia Chang and Alyssa Kies 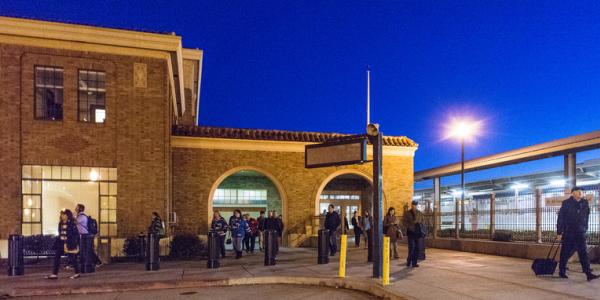 The vast majority of trips taken in San Jose are by solo commuters in personal vehicles. The Diridon Station Area Plan, currently out for public review, aims to help reverse this trend by developing jobs and housing near the city’s most important transit hub. Photo of Diridon Station by Sergio Ruiz for SPUR.

Located in the heart of San Jose, Diridon Station is a key stop for Amtrak, Caltrain, Altamont Commuter Express and the Santa Clara Valley Transportation Authority’s light rail and bus services. This transit hub connects commuters to employment centers throughout the region and brings workers to jobs downtown and visitors to events at the San Jose Arena (SAP Center), the Convention Center and other entertainment venues. Planned transit projects — such as the extension of BART, the electrification of Caltrain (which will provide faster, more frequent service) and the construction of California High-Speed Rail — will help San Jose take a step toward its goal of reducing solo car commutes to only 40 percent of all trips by 2040. They also have the potential to make Diridon Station one of the Bay Area’s most important transit and development nodes — if the area around it is planned well. The city has released a draft version of its Diridon Station Area Plan, which will shape future development near the station. SPUR has reviewed the plan and made a number of important recommendations to help the plan achieve its goals.

Currently, less than 10 percent of commuters to downtown San Jose arrive on transit. This is due to the speed of transit compared with driving and the limited number of jobs within a close walk of high-quality transit. By comparison, more than 50 percent of downtown San Francisco commuters take transit, while about 25 percent take transit to work in downtown Oakland. 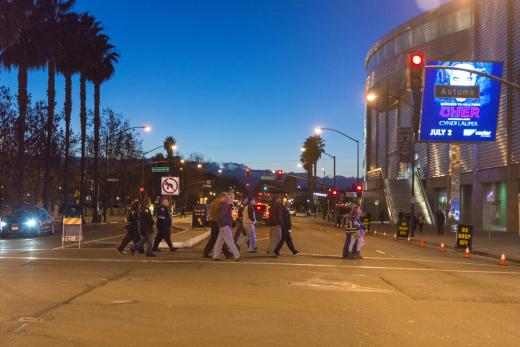 Venues like the SAP Center attract occasional transit riders, but adding office development around Diridon Station would create a more regular user base. Photo by Sergio Ruiz for SPUR

Despite the low averages compared to other downtowns in the region, within the city, residents of downtown are more likely than other San Joseans to walk, bike or take transit. That’s why increasing ridership downtown may be one of the city’s best bets to achieve its goal of reduced driving.

How Do People Commute to Work?

Residents of downtown San Jose are far less likely to drive alone to work than residents of the city as a whole. In fact, downtown residents’ rate of solo driving is nearly halfway to the city’s goal of 40 percent or less by 2040. Sources: American Community Survey 2011, 5-year estimates; Envision San Jose 2040 General Plan

Today, Diridon Station is surrounded by a few valuable amenities and a number of potential development sites, many of them surface parking lots. The neighborhoods along The Alameda are known for their architectural heritage and contain some of downtown’s few pre-WWII Victorian houses. The Los Gatos Creek Trail — a ten-mile pedestrian and bike path that stretches from Los Gatos to San Jose — could offer a promising cycling route to and from downtown if one gap in the trail can be connected. In addition to noting these valuable amenities, the Diridon Station Area Plan has identified a large selection of sites that are available for development around Diridon. The way these sites are developed (namely their uses and density) will determine whether Diridon will attract a sizeable number of workers and visitors to San Jose or continue to shuttle commuters up the peninsula.

What the Plan Proposes

The Diridon Station Area Plan (DSAP) proposes a maximum build-out of almost 5 million square feet of office space, 420,000 square feet of retail and 2,600 residential units to the east of the station. This level of development would strengthen and expand the city’s downtown, as well as helping make the area a destination where residents, workers and visitors can take part in city life. The plan focuses on establishing the Diridon Station area as a well-integrated center with a variety of commercial and mixed-use developments. The plan puts significant employment adjacent to transit while focusing housing in the southern portion of the plan area. The plan’s draft environmental impact report considered an alternative amount of development of only 1.15 million square feet, a proposal SPUR believes would be a major underuse of the available space.

The DSAP concentrates on enhancing connectivity in the area through improvement of pedestrian, bicycle, motorized and transit connections between the station and the rest of downtown. Plans to establish transportation demand management programs for future developments are included in the draft.

The DSAP places particular importance on creating a sense of place and orienting visitors upon arrival at Diridon station. The draft includes an analysis of different options for the station plaza, the selection of which will be a crucial component for creating a psychological connection between downtown and Diridon. 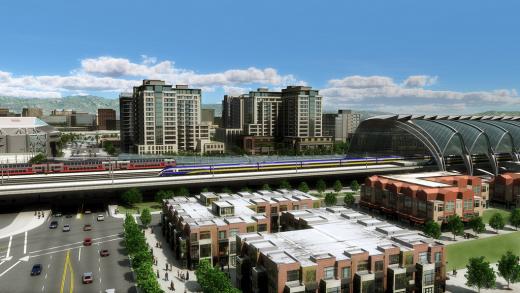 Diridon has the potential to be a major job center that could support more than the proposed 5 million square feet of development. Photo courtesy the California High-Speed Rail Authority, via flickr user Beyond DC

While SPUR supports the broad outline of the plan, there are several recommendations that we believe should be carefully considered in order for San Jose to achieve its goal of making Diridon a job center and a walkable urban village.

SPUR’s review of the Diridon Station Area Plan identified a few key elements that are necessary to developing the area successfully.

The DSAP should emphasize attention to land ownership and management structure. High levels of continuous cooperation between public agencies will be required to realize the DSAP vision and the goals outlined in the city’s Envision San Jose 2040 General Plan. SPUR recommends establishing a point powers authority to serve as joint owners for major portions of the site, in order to streamline decision-making.

Diridon Station will be serving many transit lines and commuters; therefore, clear information for every transit option is crucial, both within the station and on the street. While Diridon is technically a part of downtown San Jose, the layout of the street grid, the presence of the Highway 87 viaduct and downtown’s lack of tall buildings all make it difficult for people exiting Diridon to discover the rest of downtown beyond the SAP Center. It is important to design and plan for the area from the perspective of the pedestrian, particularly the transit passenger arriving at or exiting the station.

Strong bike infrastructure will also further assist in getting transit riders to and from downtown. In order to ensure high quality connections between transportation modes, the DSAP should emphasize these connections and the draft plan environmental impact report should analyze impacts of the project on pedestrians, cyclists and transit riders. Otherwise, automobile access will continue to drive future development.

Additionally, the DSAP includes major plans to demolish or redevelop existing buildings in the area. SPUR strongly suggests keeping the destruction of these homes and properties to a minimum. Protecting historical resources, such as the pre- WWII housing north of the station, would maintain the community’s sense of place and retain San Jose’s uniqueness.

Lastly, managing the area’s significant open space and ensuring that this space is well used and inviting is another key goal that should be carefully considered.

The DSAP is expected to appear before the San Jose Planning Commission on May 7 before being presented to City Council on May 20. More information can be found on the City of San Jose’s website. Ensuring that the DSAP adheres to certain principles will determine whether the station becomes a bustling, enduring symbol of San Jose or another ambitious but underutilized downtown investment.