By Egon Terplan and Imron Bhatti

This is the third in a series of posts on improving economic opportunities for low- and moderate-wage workers. How can we promote upward mobility for these workers? What stands in the way? To answer these questions, SPUR is working with a group of partners (MTC, ABAG, HUD, Working Partnerships USA, CCSCE, SMCUCA, Bay Area Council Economic Institute) on an initiative called the Bay Area’s Economic Prosperity Strategy. This series summarizes what we are learning.

As we reported in our first post on the Bay Area’s Economic Prosperity Strategy, a little over one-third of the Bay Area workforce earns $18 per hour or less. That’s 1.1 million workers, or 35 percent of the workforce. Given the high cost of living in the Bay Area, it’s an important economic and social goal to move many of these workers to higher paying jobs — particularly to what are called “middle skill” or “middle-wage” jobs that do not require a college degree. For the purposes of our research, we have defined these jobs as paying about $18 to $30 per hour, i.e. $40,000 to $60,000 a year. To understand these opportunities, we looked at what these jobs are, how many of them there will be in the coming years, and the skills and education levels they require. Here’s what we found.

There are 30,000 middle-wage job openings per year in the Bay Area.

Our research shows that there is more growth in high- and low-wage jobs than in middle-wage opportunities. Between now and 2020 there will be about 300,000 middle-wage job openings (or 30,000 each year). While steady, annual middle-wage openings will be outpaced by job openings in occupations paying more than $30 or under $18 hourly; those categories will each have more than 50,000 job openings per year. (See Figure 1 below.) For middle-wage jobs, most of the projected post-recession job growth has already occurred. This means roughly two-thirds of the remaining job openings by 2020 will come from the need to replace employees leaving the workforce (often retiring baby boomers).

There are several ways to fill the 30,000 annual middle wage job openings in the Bay Area: hire new entrants to the workforce, shift existing middle-wage workers into different middle-wage jobs (i.e. lateral moves), import workers from outside the region, or help the region’s current low- and moderate-wage workers to move up into these middle wage jobs. There is room for all these approaches, but since the goal of this project is to achieve more income mobility, we are focused on the fourth approach.

The good news is that many low- and moderate-wage earners already have the skills and education necessary to move into these middle-wage job openings. This means that clearer pathways to move up — such as training in the skills necessary for middle-wage jobs and improved networks to connect job seekers to employers — will go a long way toward connecting low and moderate wage workers with better jobs.

The bad news is that there are not nearly enough middle-wage jobs to move current low- and moderate-wage workers up. 30,000 openings per year simply isn’t enough to provide opportunities for 1.1 million low- and-moderate wage workers. Further, there are few obvious tools we can implement across the Bay Area to grow the total size of middle-wage jobs. (One way to grow middle-wage jobs is to promote overall employment growth. We’ll look more closely at this in a future post).

Most middle-wage job openings only require a high school diploma and skills that can be taught on the job.

As we’ ve written before, low- and moderate-wage workers tend to have lower education levels than higher-wage workers. It turns out that most middle-wage job openings are in occupations that do not require a college degree. We identified the top 21 occupations, across a wide range of industries, that will account for more than 150,000 job openings by 2020 (i.e., more than half of the total middle-wage openings). Of these top 21 occupations, shown in Figure 2 below, only three required some post-secondary education. (Computer support techs need some college, vocational nurses need a certificate and graphic designers need a college degree.) The rest just need a high school education (or less, in the case of laborers) and most don’t require experience, just on-the-job training (customer service reps, for example).

This is a positive story and shows there is a lot of potential for upward mobility. Further, many middle-wage job skills (such as customer service) are abilities that lower-wage workers often have already. Other skills needed for middle-wage jobs — like evaluating systems and managing personnel — are readily taught on the job rather than through formal education.

For example, at the Target store in San Francisco, there are about 300 entry-level retail workers earning close to minimum wage. But there are also about two dozen “team lead” positions that might pay between $15 and $25 hourly. (In Figure 2, these team leads are “First Line Supervisor of Retail Sales Workers.”) Moving up to one of these jobs requires skills that can be developed on the job, such as an ability to motivate, supervise and train staff. While educational attainment is the best pathway forward, there are many opportunities for upward mobility that do not require additional formal education.

Some industries have clear pathways for advancement.

Our research found that some middle-wage occupations provide clear opportunities for upward mobility, and some industries have significant numbers of middle-wage jobs. It is these industries and occupations that should be the focus of economic development policy. Workforce development and training programs should also focus on ensuring that low- and moderate-wage workers are adequately prepared for jobs in these fields.

Some of these middle-wage job opportunities are in industries that traditionally have well-defined career paths, such as the apprenticeship model that is a valuable source of on-the-job training in many building and construction trades. Apprenticeships provide a defined career path for workers, as well as a feasible way for low- and moderate-income workers to receive classroom and on-the-job training while still earning an income. Healthcare is another field with clearly defined pathways for advancement, with many certificate programs available. While these programs typically do not allow a worker to earn an income while studying, they have the benefit of opening doors in an industry that is experiencing steady growth. As shown in Figure 3 below, these two industries follow only manufacturing as sources of annual middle-wage job openings with low education and low experience requirements.

Figure 3: Industries With the Most Middle-Wage Job Openings 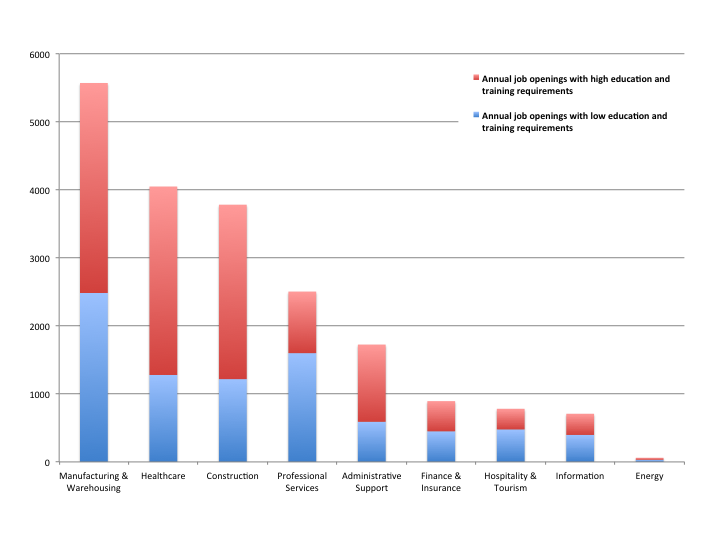 Sales jobs are a big source of middle-wage employment, but they are spread across many industries, making it difficult to identify clear pathways for advancement.

Self-employment and entrepreneurship may provide growth pathways out of low- and moderate-wage jobs.

Finally, there are opportunities for low- and moderate-wage workers to leverage their expertise in an area by breaking out on their own. A low-wage worker in a commercial laundry business, for example, might identify an underserved niche such as nursing homes based on their experience in the industry. With the right support, this worker could secure better pay by becoming an entrepreneur and setting up a new laundry service to exploit this underserved niche. Strengthening local support for small business owners and entrepreneurs may secure additional pathways into middle-wage work.

Conclusion: Formal education is important, but it is far from the only path into middle-wage work.

In sum, educational attainment is still a ticket to a better life in the United States, but it is not the only path toward a better paying job. There are tens of thousands of job openings in the Bay Area each year that pay middle wages and do not require college. In our next posts, we’ll discuss what can be done to grow the region’s total employment, with a specific discussion on what we should do to try to retain and grow middle-wage jobs.

How Do We Rebuild the Middle Class?