By Michael King and Jeffrey Tumlin 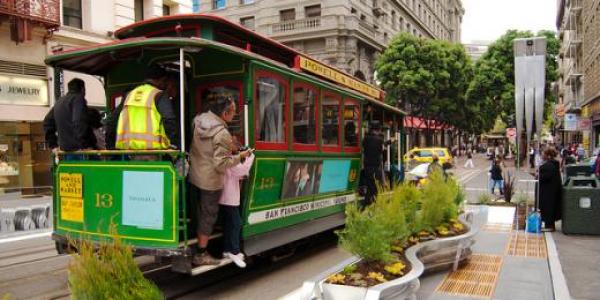 Streets are different than highways, yet the United States delegates authority for all roadway design to a private nonprofit made up largely of highway engineers. And unfortunately, many of the principles that make for safe highways make for dangerous, dysfunctional urban streets.

A new manual released this fall, the Urban Street Design Guide, could change all this. The group behind the guide, the National Association of City Transportation Officials (NACTO), formed in 1996 to provide an urban perspective on street design, helping create both safer urban streets and streets that support vibrant neighborhoods.

The guide is a blueprint for designing 21st-century streets where people can walk, bike, drive, park, take transit and socialize. Divided into six chapters, it focuses on types of streets (two-way, one-way, downtown, neighborhood, etc.); street design elements including lane widths, sidewalks and curb extensions; interim design strategies such as parklets and temporary street closures; types of intersections; intersection design elements such as crosswalks, pedestrian islands and traffic lights; and design controls, the criteria used to measure a street’s success. It provides examples throughout the country, as well as the tools to implement these tactics to create public spaces that people will not just use but cherish.

At the launch of the new guide, NACTO President Janette Sadik-Khan (the transportation commissioner responsible for New York’s “complete streets” makeover) said the Urban Street Design Guide is “a permission slip for people to innovate” and a “new DNA for city streets.” Cities can be nimble; instead of undergoing a lengthy process to update street design, change can be tested first by using low-cost solutions, such as paint and pavers.

San Francisco, one of the initial members of NACTO, is one of the exemplary cities working to remake its streets. Parklets were first imagined here, and on Sixth Street the city recently painted six sidewalk extensions to pilot ways to increase pedestrian safety. The city will remain at the forefront of innovation when San Francisco Municipal Transportation Agency Director of Transportation Ed Reiskin becomes president of NACTO in 2014 and hosts the group’s next conference in June.

Cities can adopt the Urban Street Design Guide and use it as their primary resource or as a complement to guidance from the American Association of State Highway and Transportation Officials or a local manual.