By Egon Terplan and Sara Tiller

This is the first in a series of posts on improving economic opportunities for low- and moderate-wage workers in the Bay Area. How can we promote upward mobility for these workers? What stands in the way? To answer these questions, SPUR is working with a group of partners (MTC, ABAG, HUD, Working Partnerships USA, CCSCE, SMCUCA and the Bay Area Council Economic Institute) on an initiative called the Economic Prosperity Strategy. This series summarizes and shares what we are learning.

The challenge to rebuild an economy with upward mobility, particularly for workers at the bottom of the wage scale, is compounded by the reality that middle-wage jobs are becoming scarcer as more and more job growth takes place at the high and low ends of the wage spectrum. Past efforts to address this issue have sometimes emphasized the differences between workers at the bottom and workers with higher incomes. But by emphasizing these differences, we often mask the specific information needed to solve major shared challenges. As we are discovering in our work on the Economic Prosperity Strategy, workers at the bottom of the wage scale are a lot like all workers. They live everywhere, work everywhere and are employed in every industry.

This finding is critical as it will help focus strategies on overcoming specific barriers, not on reinforcing assumptions that may not be correct. This post explores what we’ve identified about low- and moderate-wage workers in the Bay Area and why the similarities (and actual differences) among workers are important for anyone concerned about the future of our region.

$18 per hour is roughly 80 percent of the median wage for the region. Workers at this wage level earn less than $40,000 per year. In 2007, the United Way of Silicon Valley reported that households in Solano County, the county with the lowest cost of living, needed an annual income of $47,861 to be economically self-sufficient. Households of two adults and one child in San Mateo, the county with the highest cost of living, needed wages of $63,871 just to maintain self-sufficiency. In other words, the earnings of a low- or moderate-wage worker and many middle-wage workers on his or her own is below self-sufficiency standards in all Bay Area counties.

Beyond their income, low- and moderate-wage workers look remarkably like the rest of the Bay Area’s workforce. They live and work throughout the region, they get around much the same way higher wage earners do, and they are an ethnically and racially diverse group. There are two key distinctions between low- and moderate-wage earners and the rest of the workforce: They have much lower levels of formal education, and they tend to be younger.

Workers in low- and moderate-wage jobs often have low levels of formal education. Nearly three-quarters of low- and moderate-wage earners have no degree beyond high school, compared with only 23 percent of the entire workforce. Some of these workers may have taken college courses without completing a degree. Even within the low-to-moderate-wage category, the lower the educational attainment, the lower the wages. While only 15 percent of these workers have not graduated from high school, that figure jumps to almost a quarter when looking only at those earning $11.25 and below. 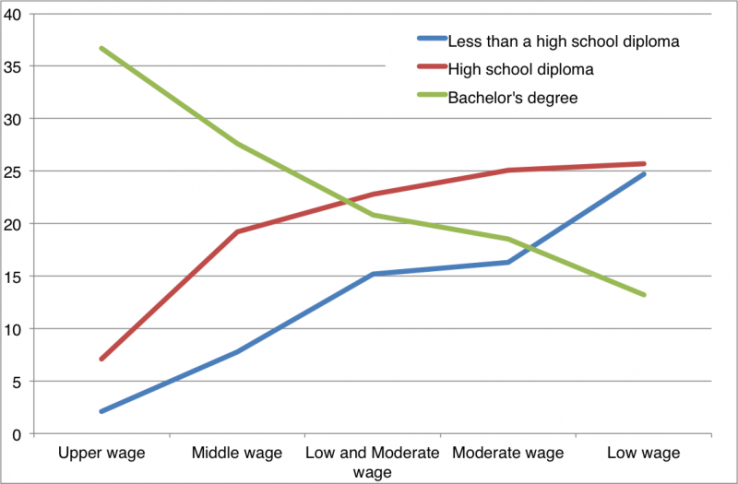 Educational attainment also significantly affects the likelihood of being unemployed. Workers with lower levels of education were more likely to have been unemployed in the past five years than workers with at least a college degree.

Low- and moderate-wage workers also tend to be younger than the overall workforce. Nearly half of these workers are aged 19 to 34, compared with only a third of the workforce as a whole. In addition, the vast majority of the youngest workers –– those aged 16 to 18 –– work in low or moderate wage jobs.

Moderate- and high-wage workers tend to be older, between the ages of 35 and 54. This is not surprising, since wages tend to increase with age and experience, but it is important to note that not all low- and moderate-wage workers are young, and many are supporting families.

The low- and moderate-wage workforce is generally diverse, like the overall workforce

Figure 3. Share of Total and Low- and Moderate-Wage Workforce by Race 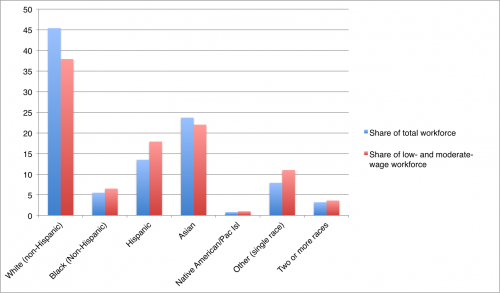 There is a common assumption that price increases in the Bay Area’s hottest residential markets are pushing low- and moderate-wage workers to the region’s edge, thereby forcing them to endure long commutes back to the center. While there are certainly examples of this phenomenon, the research of this project discovered that low- and moderate-wage workers are more likely to work within their county of residence than all workers. At least 70 percent of low- and moderate-wage earners residing in a given county also worked within that county. In fact in every county of the Bay Area, workers are more likely to commute to another county as their incomes go up, not as they go down. In short, people commute further for better opportunities. The bitter reality is that many of those opportunities are available only to those with cars. While this is bad news for urbanism, transportation is not a significant barrier to employment, as most low- and moderate-wage workers have access to cars, just like the rest of the workforce.

Fig. 4 Share of Workers Employed Within Their County of Residence 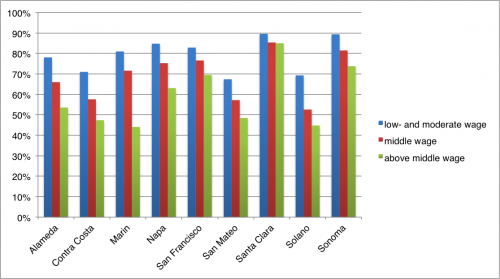 Conclusion: Understanding how low- and moderate-wage workers are different is key to overcoming barriers

When looking at this issue from a region-wide perspective, the key difference between those at different ends of the wage scale is education. Focusing on improving educational attainment, then, is a clear strategy for upward mobility. However, as we will explore in future posts, educational attainment may be a necessary but not sufficient strategy to move up to better jobs.

How Do We Rebuild the Middle Class?