How Do We Rebuild the Bay Area's Middle Class?

By Egon Terplan and Tony Vi

In the past few years, there's been a lot of attention on income inequality and the shrinking middle class, particularly as job growth nationally has remained sluggish. Meanwhile, many companies are struggling with the skills gap, when hiring workers with the right training proves very difficult. Some claim there are millions of unfilled positions nationally — although the New York Times has editorialized that companies who claim to have a hard time finding qualified workers should try offering more pay.

Whether or not the skills gap is inflated, we know that many individual workers do not have the right skills for opportunities that exist in our economy. We also know that the opportunities for people to move up into higher paying jobs are diminishing as the share of middle-income jobs declines.

In the Bay Area, despite an economic boom and declining unemployment rates, many workers are still struggling. Those returning to the workforce are often in jobs that pay less than what they earned before the recession.

How can we connect low- and moderate-income workers to existing quality jobs and expand the number of middle-income and middle-skill jobs? SPUR is part of a new initiative to identify ways we can increase economic opportunity in the Bay Area. Some of the questions we seek to answer include:

The project begins with the U.S. Department of Housing and Urban Development’s Office of Sustainable Communities and Housing, which has recently funded regional planning initiatives in dozens of metropolitan areas throughout the country. The goal is to create stronger, more sustainable communities by integrating housing and jobs planning, fostering local innovation, and building a clean energy economy. The Bay Area’s regional planning agencies — the Association of Bay Area Governments (ABAG) and the Metropolitan Transportation Commission (MTC) — were awarded one of these grants in late 2012. It will provide $5 million over three years for planning and implementation work.

Somewhat unique nationally, the Bay Area is devoting its entire grant — called the Regional Prosperity Plan — to strategies focused on equity, particularly improving housing and economic conditions for low- and moderate-income residents and workers. The plan has three main initiatives: the Housing the Workforce Initiative, the Economic Prosperity Strategy and the Equity Collaborative, intended to support equity goals in the overall project.

Over the next year, SPUR will lead the Economic Prosperity Strategy, which aims to rebuild an economy with opportunity. Our partners — in addition to sponsors MTC and ABAG — are the Bay Area Council Economic Institute, Working Partnerships USA, Center for Continuing Study of the California Economy, Eisen|Letunic and the San Mateo Union Community Alliance. The initiative will focus on how to move low- and moderate-income workers in the Bay Area (the 35 percent of workers making less than $18 per hour) into more middle-income jobs (those paying $18 to $30 per hour). To implement the ideas in the Economic Prosperity Strategy, MTC will devote $1.1 million in funds from the overall HUD grant to support a series of pilot projects between 2014 and 2015.

Why Does the Bay Area Need This Plan?

Recent studies have shown that despite a growing economy and rising incomes, the Bay Area continues to provide fewer middle-skill and middle-wage job opportunities. Inequality has risen sharply in the last decade and is now greater in the Bay Area than in the United States or California. The chart below from the Bay Area Council Economic Institute’s recent economic assessment shows the dramatic rise over the past decade in the “Gini Coeffecient,” a measure of income inequality where 0 means everyone has the same income and 1 means that one person has all the income. This rise in inequality is largely due to the decline in middle-income jobs and the rapid increase in wealth from growing companies. 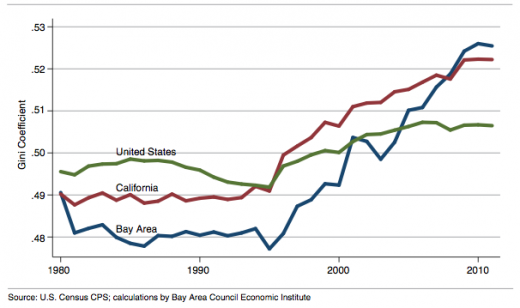 Having an economy with mobility is good for everyone. When workers move from low-income to moderate-income jobs, not only are they increasing their household’s wealth, they are also creating a job opening for someone else coming into the labor market. If the upward mobility is a reflection of increased skills, the overall economy benefits through rising productivity and increased competitiveness.

Which Workers Are the Focus of the Economic Prosperity Strategy?

There are 3.2 million total workers in the Bay Area out of a population of 7.2 million. More than one in three workers (1.2 million) make less than $18 per hour in wages. Workers in this wage range include retail sales people, childcare providers, teachers, janitors, security guards, nursing aides, waiters, receptionists, truck drivers, housekeepers and many others. While workers who earn less than $18 per hour tend to be a little younger than the average worker, many people remain at or near minimum wage for their entire working lives. (The minimum wage is currently $8 per hour in California, $10 in San Jose and $10.55 in San Francisco.)

Despite what some may assume, low- and moderate-income (LMI) workers are not concentrated in any particular part of the region or in specific neighborhoods. While people of color are overrepresented among the ranks of low- and moderate-income workers, one third of people earning these wages in the Bay Area are white. And although workers closest to minimum wage are more likely to take transit to work, the differences are slight: 12.3 percent of those who earn $11.25 and less take transit, compared with 10.2 percent of all workers. Once workers’ pay gets to $12 per hour or more, they are just as likely to drive as everyone else (i.e., about 79 percent will drive to work alone).

The map below shows where workers who earn less than $18 per hour live in the San Jose region. As is clear, they live everywhere — though with slightly greater concentration in east and south San Jose. 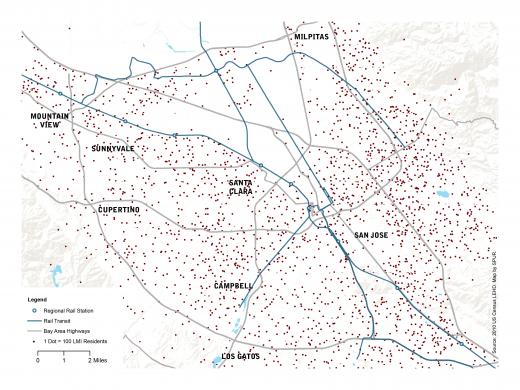 The next map shows a similar story in San Francisco. (Keep in mind that the higher concentration of low- and moderate-income residents in the Tenderloin and Chinatown is partly a reflection of the higher density in those neighborhoods.) 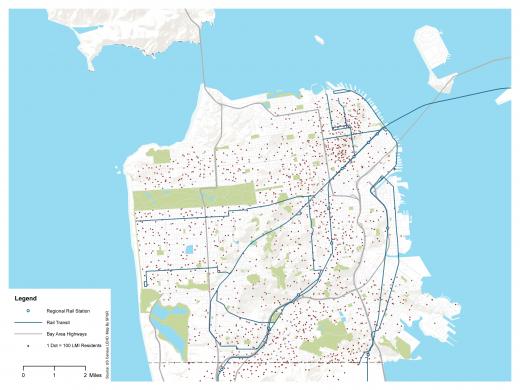 Working with our partners, we recently launched the Economic Prosperity Strategy with a series of workshops and outreach meetings with community, labor, business and local government leaders to determine the barriers to achieving a more inclusive regional economy. In the following months, we will begin examining solutions and strategies to address these barriers.

So far, several themes have emerged with respect to barriers facing low- and moderate-income workers. One barrier to accessing better jobs is the lack of on-the-job training. Another is the transportation challenge of traveling between multiple job sites and school settings throughout the course of a day, given that many low and moderate income workers hold multiple jobs in order to make ends meet. The solution to the first challenge might be new partnerships with employers, while the latter might be helped by better coordinated transit systems or land use planning that results in more concentrated job centers (putting more opportunity in one place).

The approach of the project will be to break down traditional silos and barriers between organizations and policy areas — such as workforce development and transportation planning — and to encourage better collaboration and coordination. We want to highlight existing local solutions and create new solutions that help move Bay Area workers into middle-income jobs.

As this work progresses, we will use the SPUR blog to report back on what we learn about the jobs and industries that provide opportunities for low and moderate-income workers to move up. To get involved in this important project, contact Egon Terplan eterplan@spur.org.