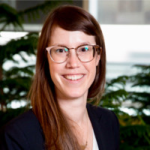 Chief of Staff, Office of the General Counsel, Salesforce

Tamsen Drew oversees Salesforce’s relationship with cities and states in the western United States. In this role, Tamsen advocates for solutions to the Bay Area’s homelessness and housing crisis as well as improvements to the region’s transportation system. Prior to joining Salesforce, Tamsen worked for the City and County of San Francisco for seven years where she focused on public-private development projects. She served as Senior Project Manager for the Hunters Point Shipyard and Candlestick Point Redevelopment Project with the Office of Community Investment and Infrastructure (OCII). Prior to joining OCII, Tamsen served as the Deputy Director of Legislative and Government Affairs for Mayor Edwin M. Lee, where she advocated for the Mayor’s and the City and County of San Francisco’s state and federal legislative priorities. Tamsen holds a Juris Doctor degree from the University of California, Hastings College of the Law and a Bachelor of Arts degree in Architecture with a minor in the History of the Built Environment from the University of California, Berkeley.