What it means: Over the last few years, the incomes of those moving into the Bay Area have risen faster than Bay Area wages, suggesting that the deterrence of potential newcomers is occurring at higher income levels than before. Similarly, the concurrent rise in the income of those moving out suggests that the ranks of people “crowded out” have swelled to include higher earners than ever before.

The Bay Area is one of the world’s most dynamic and vibrant urban economies. But since the 1970s, it has greatly decreased the pace at which new housing is built, and housing prices have risen significantly. As a result, the Bay Area exerts an intense gravitational pull on people but has insufficient housing to accommodate them all.

The high cost of housing deters potential newcomers from moving here, especially if they have modest financial prospects once they arrive. It also prompts current residents to leave as they often seek more affordable housing in other regions.

By dampening the flow of newcomers and tipping the scales so that more residents leave, the rising cost of housing prevents the population from exceeding what the current housing stock can accommodate. This price-driven mechanism has implications with respect to the identity of who moves to the Bay Area, who stays and who leaves. Housing price appreciation has skewed the inflow of new residents towards higher income levels, while skewing the outflow towards those who earn comparatively less. 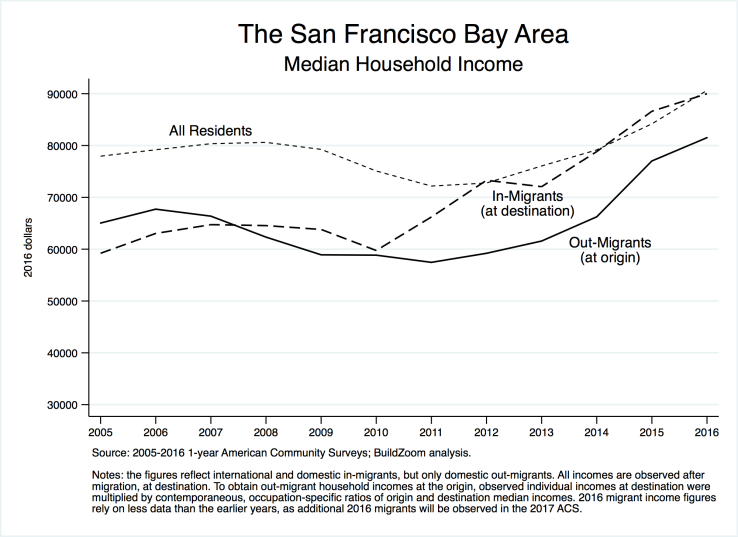 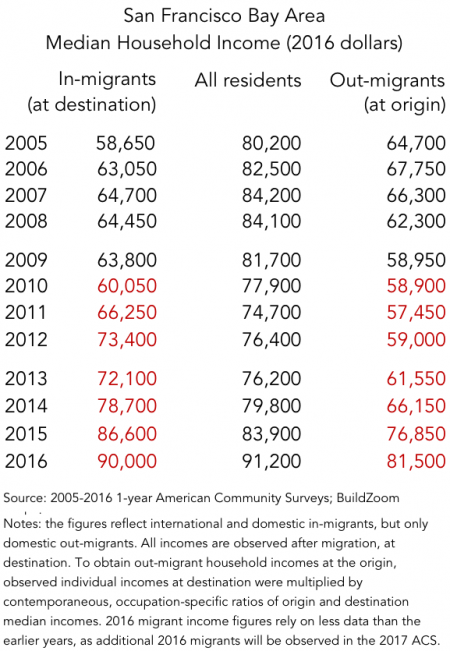 Part of the rise in both in- and out-migrant incomes stems from a general rise in Bay Area incomes that affected all residents. But the faster pace at which these groups’ incomes have risen is telling. For in-migrants it suggests they were more likely employed in sectors whose wages increased the most. In fact, 61.1 percent of recent in-migrants had a college degree (or higher), compared to just 44.7 percent of current residents.[1] The fast-rising incomes of in-migrants also suggest that Bay Area housing costs now deter more affluent would-be residents than before. Both possibilities amount to more financially selective in-migration, and both are probably at play.

The fast-rising incomes of out-migrants, on the other hand, indicate that those “crowded out” of the Bay Area are more affluent than before. As Bay Area housing costs continue to grow, they are likelier to tip the scales in favor of moving, even for households earning well. In addition to affordability woes, escalating home values also tempt homeowners to sell their Bay Area homes and retain part of the proceeds by moving to less expensive markets. Comparing the incomes of in- and out-migrants with those of all Bay Area residents requires some caution because young adults are more geographically mobile than other age groups. Young adults earn less because they are still early on in their careers, and they are also likelier to be single and live in single-earner households. Thus, in- and out-migrants’ current incomes likely understate their place in the lifetime earnings distribution. 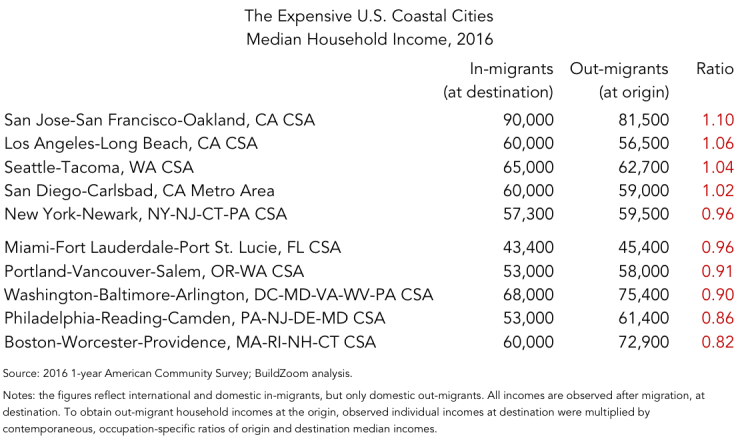 Those leaving the Bay Area tend to be high-earners relative to people in the cities they move to, even after accounting for different regional wage levels. When someone leaves the Bay Area for a different region, they typically earn less in their new home. This is because most occupations earn higher salaries in the Bay Area than elsewhere in the country. Out-migrants’ median household income in the Bay Area was $81,500 per year, but in their new home regions it was $68,200. Even though that’s a big drop, it’s still more than the median household income in, for example, the Chicago ($65,500), Portland ($64,900), Los Angeles ($64,700), Dallas ($62,500) and Atlanta ($61,100) metro areas.[2]

The Bay Area’s economic vitality and diminished construction exert selective pressure on businesses as well. When the Bay Area’s growth is restricted, it affects firms directly through rising non-residential real estate costs and indirectly through employees’ housing needs. The leading industries and firms of Silicon Valley have no difficulty meeting the costs and are likely to remain in the Bay Area no matter what, thanks to the depth of its labor and venture capital pools. But the region’s high costs may cause other businesses to shut down or relocate and prevent new ones that would otherwise emerge from doing so here (or at all). Ironically, the knee-jerk reaction on the part of activists and local policymakers to “balance housing and jobs” by imposing constraints on business merely accelerates the process by which leading firms and industries crowd out others.

Despite the challenges, the Bay Area still offers people immense opportunity. To the educated and the entrepreneurial, it offers virtually unparalleled opportunity and, even to those who arrive with lesser means, it offers some of the best economic opportunities in the nation. Although net domestic migration is negative at low income levels, the region’s population is quite dynamic, as large numbers of people move into and out of the Bay Area at all income levels. Overall, about 1.7 million people left the Bay Area from 2010 to 2016 and almost 2 million people moved in, suggesting that about 20 percent of the region’s population changed over this period.[3] In-migrants include 503,000 people with annual household incomes below $50,000, of whom 337,000 came from elsewhere in the U.S. 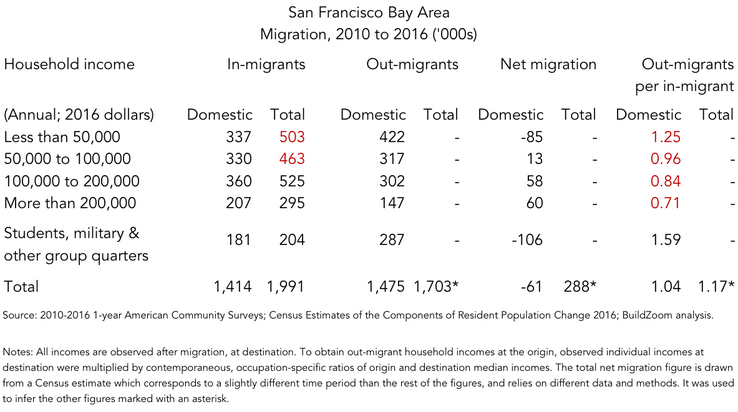 Rather than embracing people and the growth that they embody, the Bay Area has resisted growth and increasingly shunned people, barring them from opportunity. The rising median income of households leaving the Bay Area, which has grown faster than Bay Area wages as a whole, indicates that those shunned are no longer confined to low income levels, but increasingly come from higher rungs of the socio-economic ladder. The result is a Bay Area whose population is increasingly skewed towards high income levels, which can therefore support further housing price appreciation, rendering it less hospitable to those paying for housing and to those employing them. The human cost is real for those who must compromise on living conditions and whose financial situation — driven by housing costs — often seeps into other spheres of life, such as the ability to provide for children. Those leaving the area or deterred from moving to it pay a price in terms of lost opportunity. It is ironic that for many Bay Area homeowners, realizing the gains from escalating property values requires leaving the Bay Area.

Yet the Bay Area should have no difficulty absorbing a greater population. As I have written elsewhere,[4] if the Bay Area’s developed footprint were to be built up to the densities of Paris or Manhattan, respectively, it could house either 75 million or 100 million people, leaving plenty of space for far more moderate scenarios. Of course, greater density would increase congestion, but it would also render transit and shared transportation solutions more feasible. Perhaps more fundamentally, one must ask whether the congestion created by a greater Bay Area population would be any worse than the impact the same population would otherwise have elsewhere. If only the residents and policymakers of the Bay Area allowed the necessary construction to take place, the Bay Area could accommodate far more people and, in so doing, keep the opportunity it offers accessible to all.

1 These figures correspond to individuals aged 25 and up observed to have a 4-year college or higher degree in the 2016 1-year ACS.

2 All median household incomes are drawn from the 2016 1-year ACS and refer to CSAs.

Issi Romem is the Chief Economist at BuildZoom.