Our Vision for Downtown Oakland

Five big ideas for strengthening Oakland's urban center. Excerpted from the SPUR report "A Downtown for Everyone."

After years of struggling to attract investment, downtown Oakland is enjoying a renaissance. Organic, bottom-up growth and targeted public investment are resulting in new cultural events, art galleries, restaurants, bars and retail stores. The population and job base are growing, companies are relocating or expanding downtown (including Uber, which in September, announced its purchase of the former Sear’s building), and commercial vacancies are declining.

Oakland’s urban center is poised to take on a more important role in the region. We believe that the best path forward is to plan for growth — and to shape that growth to make downtown Oakland a great place that provides benefits to all. Downtown Oakland is an opportunity to demonstrate that equity and economic growth can go hand in hand.

Downtown faces key challenges today. While the number of jobs is growing, the economy remains fragile. Institutional lenders have been hesitant to invest in downtown projects, large anchor tenants are scarce and commercial rents are rarely high enough to cover the cost of new office construction. Many in downtown, and Oakland generally, struggle to secure affordable housing and high quality employment. Downtown’s parks, plazas and streets need upgrading and maintenance. Its centers of activity — such as City Center and Jack London — are spread out and density is uneven, contributing to a final challenge: Public safety concerns deter some from spending time and investing in downtown.

SPUR’s new report, A Downtown for Everyone: Shaping the Future of Downtown Oakland, from which this article is excerpted, looks at solutions to these challenges, as well as ways to take advantage of unique opportunities. Unlike many urban centers, downtown Oakland has the infrastructure in place to support growth. It is at the center of the Northern California rail network and has more BART trains passing through it than any city in the region. Downtown’s streets are largely without congestion and could be reimagined to provide more space for buses, bicycles and pedestrians. There are also many acres of vacant land and surface parking lots right in the middle of downtown. This means downtown could add thousands of new jobs and residents without displacing any current homes or businesses. Add to these opportunities the creativity and energy of Oakland’s residents, and there is an opening for downtown Oakland to demonstrate a new path forward for cities.

Our Vision: A Downtown for Everyone
Oakland’s downtown should reflect what is great about the city. We believe it should be an economic engine that serves all of Oakland. It should be a place where people from all over the city — and all over the Bay Area — come to spend time. It should be a center for many of the city’s jobs, institutions, governmental  agencies and cultural resources.

To achieve this vision of a downtown for everyone, we have articulated a set of principles to guide new growth and change as they come to downtown over time:

• Downtown should welcome everyone.

• Downtown should encourage a wide mix of jobs, residents, nightlife and cultural activities.

• Downtown should strengthen its history, culture and character as it grows.

• Downtown should generate taxes and investment that allow everyone to benefit from economic growth downtown.

• Downtown should prioritize getting around by walking, biking or taking transit for everyone, regardless of income.

• Downtown should embrace its role as an increasingly important regional center.

With these principles in mind, we propose five big ideas for how downtown can grow to better serve Oakland and its residents:

Big Idea 1: Grow 50,000 more jobs in downtown and create pathways to get people into them. There are many ways Oakland can make its downtown a better place to form and grow businesses, including providing support to start-ups, establishing a “jobs squad” to help with hiring and bringing on a chief economist to analyze the economic impact of new legislation. One important opportunity is the large amount of publicly owned property downtown. The city and other public sector landowners should develop a strategic vision for how to best use public land to meet goals like creating new jobs and raising revenue for city services. Of equal importance to job growth is job access and making sure new jobs are broadly available. As companies and jobs grow, we recommend that the city and its partners work to create strong alignment between the education and workforce systems, so that students and workers can get on pathways to these opportunities.

Big Idea 2: Bring 25,000 more residents to downtown at a range of incomes, and enable existing residents to remain. Adding more housing and more residents downtown will make it more active, particularly during evenings and on weekends. This will increase local amenities and public safety. Over time it will also help lead to the growth of retail, a critical gap. To meet the goal of 25,000 new residents, the city should update its zoning to allow more housing and improve amenities to attract new residents. To make sure that downtown remains accessible, the city should experiment with new housing models and secure more funding from a wide variety of sources to preserve and expand affordable housing downtown. The city must also do a better job enforcing current rent protections, so that existing residents can stay in downtown as it evolves.

Big Idea 3: Set clear and consistent rules for growth to make downtown a better place for everyone. To add new residents and jobs, downtown Oakland will need a lot of new development. The rules governing new construction must take into consideration the needs of the community as well as the financial realities of development. We recommend that the city set financially feasible impact fees in order to maximize revenue while enabling new investment to take place. We think the city should take a market-oriented approach toward land use decisions in most of downtown, but hold out for office uses near BART and maintain industrial uses in Jack London. We also recommend that the city set performance targets and standards for downtown and adjust policies to keep Oakland on track to meet them over time.

Big Idea 4: Create inviting public spaces and streets as part of an active public realm. Great downtowns are comfortable, clean and safe. The ground floors of buildings are inviting, the parks and public spaces are beautiful, and visitors can easily understand how to get around. To achieve great downtown status on these measures, we recommend that the city strengthen its urban design guidelinesfor buildings, especially ground floors, and redesign its streets to be more functional and welcoming for pedestrians, cyclists and transit riders. The city should invest in new and existing public spaces, improve wayfinding, and adopt Vision Zero policies to reduce traffic-related deaths and injuries.

Big Idea 5: Make it easy to get to and around downtown through an expanded transportation network. Downtown Oakland is one of the most transit accessible places in the region. Yet only 24 percent of downtown employees take transit to and from work. Over time, downtown should strive to increase the share of commuters who take transit, walk or bike to more than 50 percent. To achieve this, we recommend the city and transit operators redesign the local bus system, build out the East Bay bus and bus rapid transit network, create a world-class biking network, and close or remove some freeway off-ramps to regain land in downtown. It will also be crucial for the city’s new Department of Transportation to create a capital plan to prioritize and identify funding for the many infrastructure projects currently under consideration downtown.

Big Ideas for the Future

While Oakland and downtown have many immediate concerns that should be addressed right away, we think there are four game-changing long-range ideas that are worth beginning to plan for now. These are the design and routing of a second Transbay rail tube, the redesign and reuse of interstate I-980, the undergrounding of freight and passenger rail in Jack London, and the undergrounding of interstate I-880.

The freeways and associated auto-oriented planning of the postwar decades did significant damage to downtown Oakland and its surrounding areas. Turning those physical and psychological barriers into something positive will go a long way toward reconnecting downtown with West Oakland and the waterfront. In the case of I-980, the freeway right-of-way itself can be used to help bring vitality to areas west of downtown. We encourage Oakland to think long term about the positive opportunity to remake its infrastructure.

These four big ideas for the future are not the only potential major investments or changes for Oakland but they would open up new possibilities for a city that bore the negative impacts of freeway building, urban renewal and other planning policies in the 20th century. We put them forward to start the conversation about what is possible for Oakland and its downtown.

Citymaking is difficult. It takes a long time. It requires many different actors. And there is no silver bullet. Viewed against our current culture’s celebration of disruption, downtown planning and revitalization can feel like an anachronism. But patience and longterm thinking are the key to creating and maintaining great cities.

Downtown Oakland is already a great place within a great city. But we believe it can be much better, providing greater benefits to the residents of downtown, the city and the region.

To read all 30 of the report's recommendations, visit spur.org/downtownoakland 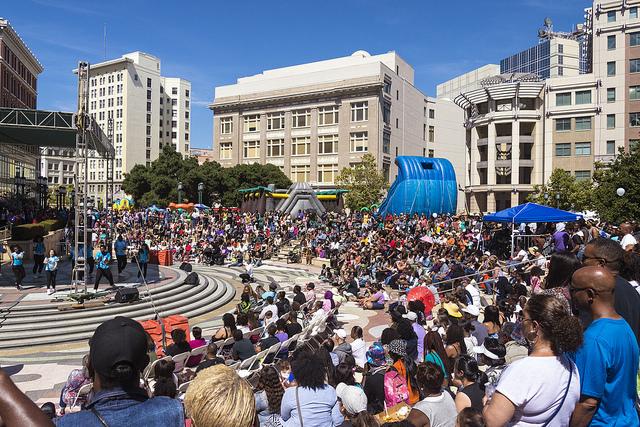 What Are Downtowns For?

In previous SPUR publications, we’ve made the case that downtowns are one of the greatest achievements of American urbanism.1 No other society has concentrated so much of a city’s commercial activity — both business and retail — in a tight urban core. Downtowns provide important benefits for both the surrounding city and the broader region. They serve three key functions: cultural and civic, economic, and physical and spatial.

The Cultural and Civic Function: Downtowns are a meeting ground, a stage.

Downtowns are a place to welcome everyone, a place to celebrate city life. They’re where we gather to seek solace in times of crisis and where we come to speak our political opinions. They’re where people of different economic, racial and cultural backgrounds spend time and share together. In a downtown, there is no single civic voice; it’s a place where all voices representing the city’s diverse communities have room to express their opinions.

The Economic Function: Downtowns are an economic driver, revenue-generator and place of opportunity.

Downtowns are where many businesses locate, particularly those that value face-to-face interaction. The density in downtowns supports the clustering of industries, putting companies in close proximity to many of their customers, clients, competitors, partners and suppliers. This economic activity also provides revenue to support city services. And because downtowns attract a variety of industries, they provide a wide range of jobs and opportunities to a city’s — and region’s — residents.

The Physical and Spatial Function: Downtowns are a place to concentrate higher densities around transit.

Downtowns are places that support density and growth, with the potential for lots of jobs and lots of housing. Downtowns are where we usually focus our transit and encourage most people to arrive and move around without a car. Growth in downtowns has a smaller environmental impact than growth in lower-density areas. Downtowns are also where citizens and civic leaders accept and expect more experimentation and a greater mixture of uses. Other neighborhoods, even dense urban ones, would not permit a high-rise next to a one-story historic building, a nightclub next to an apartment complex or a high school on top of a music venue. Downtowns are fundamentally different from traditional neighborhoods and should be treated as such.