San Francisco added jobs faster than any other city in the country in 2013.

San Francisco added jobs faster than any other city in the country.

The boom-and-bust cycle is an inherent part of capitalism. But underneath the ups and downs of the business cycle are longer-term trends — in this case the emergence of technology as the dominant employment sector in San Francisco.

As of 2013, approximately 7.5 percent of total private sector jobs in San Francisco are in “technology,” broadly defined.1 Over the last two decades, tech has grown from a base of less than 1 percent in 1990 to 4 percent at the height of the 2000 dotcom boom to nearly 8 percent today.

We’ve lived through the trauma of boom and bust during this period: job growth, rising incomes, rising rents, flush government budgets, speculation and gentrification in the good times; jumps in unemployment, vacancies and deficits, in the down cycles.

The question “Is this current condition sustainable?” might not be the right one to ask. History tells us that this boom will be followed by a bust (which will be followed by a boom. Et cetera). Commercial rents will drop, and vacancies will climb. Rents may decline (or at a minimum, increases will slow).  Many people may move to other regions, as happened after the dotcom crash. And then we know that the bust will be followed by another boom. A long-term sustainable growth trajectory does not seem to be a part of our economic system. 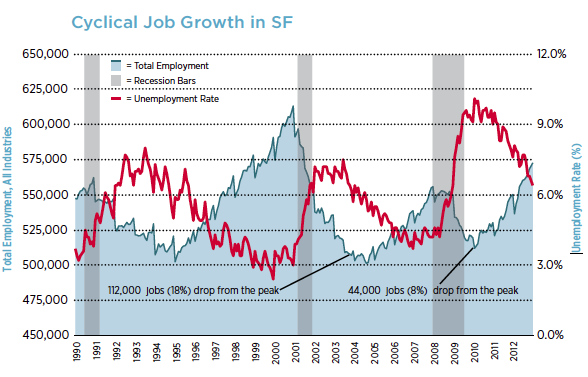 Today, private sector employment is about 20,000 jobs higher than where it was in 2007, before the most recent recession. Unemployment dropped to about 5-1/2% from a high of over 10% in 2010. Despite this recent growth, the city still has close to 30,000 fewer private sector jobs than at the height of the dot com boom in 2000.

About three quarters of “tech” in San Francisco is what the Federal government calls “Computer Systems Design and Related Services” (NAICS 5415) — about 28,000 jobs in software and web design, data processing and other information technology services.

But the drama of the up and down can obscure longer-term structural change. In the case of the Bay Area, what is most striking is the convergence of the South Bay and peninsula economies with San Francisco’s.  Silicon Valley is no longer limited to areas south of SFO: In many parts of the Bay Area, the economy is increasingly driven by knowledge-intensive technology firms. And while most of the biggest tech firms are still in San Mateo and Santa Clara counties, the technology sector is now the fastest-growing part of San Francisco’s employment base — and a growing part of the East Bay’s.

People used to say that tech firms would only move into low-rise buildings or historic warehouses in SoMa. But data tells a different story: Today, fully 22 percent of all office space in San Francisco is occupied by tech firms.

The tech boom makes San Francisco the envy of cities all over the world. The unemployment rate has fallen from over 10 percent in 2010 to 5.6 percent (as of August 2013) and continues to drop. The multiplier effect on export-heavy tech jobs is as much as 5 to 1 (meaning that for every job in tech there are as many as five other jobs created across many different sectors — everything from restaurants and retail stores to architects, real estate agents, nurses and construction workers). City coffers are flush with a yearover- year increase in the city budget of $600 million.[2]

But the size of this job growth relative to the size San Francisco’s housing stock (combined with the city’s attractiveness to residents) has created huge problems in the form of skyrocketing prices for housing. And as much as the housing cost issues consume political and collective thought, the key is that economic growth is a prerequisite for many of the other goals we have. The ability to invest through new public spending instead of slashing services across the board is a luxury that results from economic growth.

Our job is to find ways to make sure that more people get the chance to benefit from the prosperity that has come to San Francisco and parts of the entire region. That means working on new ways to connect people to the jobs being created. In particular, we need to get people on a pathway to betterpaying jobs — whether for tech firms or for one of the many other firms paying good wages. It also means facing the long-term structural housing supply problem head on.  SPUR has been working on both of these major challenges and will continue to do so throughout 2014.

[1] In the city, the tech industry consists of companies in three North American Industry Classification Systems (NCIS) categories: computer systems design and related services (which accounts for 3 in 4 of the 37,000 total tech jobs), internet publishing and web search and software publishing.