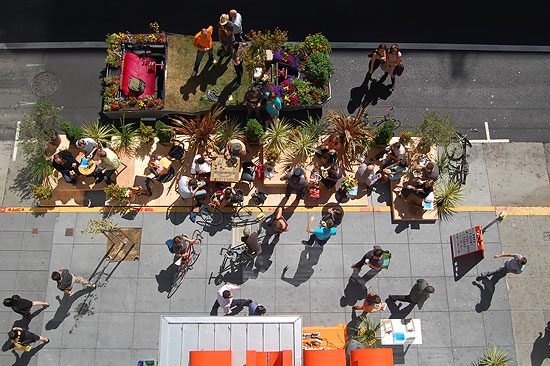 Burning Man. Critical Mass. PARK(ing) Day. The names are fanciful. The projects are creative, participatory, critical and communal. Each has grown into a global movement, and each invites its participants to explore a range of adaptable, open-source methods for revising and remixing the urban landscape. And they all started in San Francisco. What is it about this city that inspires people to take matters into their own hands?

These types of cultural practice—and there are many examples from around the world, though they do seem to find a particular purchase here in San Francisco—fall under a broad conceptual formulation that we might call participatory urbanism. In contrast to the traditional processes of official bureaucratic urbanization, which can be expensive, time-consuming and relatively inflexible, there is an approach to urban processes that is characterized by temporary, participatory, flexible solutions that can adapt, evolve and change to meet a range of dynamic urban conditions. Working within a range of urban public spaces, from streets and plazas to freeway underpasses, vacant lots, parking spaces, and underused streets, participatory urbanists often establish operations at the fringe of cultural production (and sometimes at the edge of the law) and they can teach us a fair amount about how to generate a more effective, user-friendly built environment.

For some time, San Francisco has attracted a certain type of creative character. We appreciate our colorful renegades, our mischievous visionaries, our adventurous artists. Our regional history is crowded with rogues and charlatans, Forty-Niners and beatniks, hippies and radicals, poets, painters, protesters and pranksters. Our geography plays its part in this story as well: San Francisco sits at the cultural extremity of Manifest Destiny and at the gateway to the Pacific. This city is a crossroad, a port town, a wild golden gate opening to an ocean of possibility. We can climb our hills and see far—and we can see our city in the distance. We can stand apart and view it as an object, hold it forth and examine it as a thing, observe it as a cohesive, unified whole.

This cultural legacy manifests itself in a range of creative practices that have originated here over at least the past half-century. Beginning in the 1960s, Art Farm, the experimental art and architecture collective, created inexpensive, temporary, portable inflatable structures that served as mobile venues in which to hold lectures, happenings and other cultural events. Instructions for replicating these inflatable structures were made widely available through Ant Farm's "Inflatocookbook." In the early 1970s, Artist Bonnie Sherk built "Portable Parks I-III"—temporary public parks along freeway overpasses and on Maiden Lane in downtown San Francisco that were an early precedent to PARK(ing) Day.

Since the 1970s, the Billboard Liberation Front has been subverting the commercial core of our visual landscape by creatively, cleverly and illegally "improving" the messages of advertisers on local billboards. Survival Research Laboratories has made us intimately aware of the danger inherent in our heavily mechanized everyday world by producing large-scale exhibitions of robotic machines and fire, staged under freeways and in vacant lots around the city, usually without permits. These shows were frequently—sometimes almost immediately—shut down by the police or fire departments.

In the 1980s, The Cacophony Society, which describes itself as "a randomly gathered network of free spirits united in the pursuit of experiences beyond the pale of mainstream society" created pranks, hoaxes, guerrilla theater and public spectacles around town. Among its many projects, the Cacophony Society developed SantaCon, a participatory mob of Santa Clauses who engage in public displays of outrageous, bawdy behavior, sing racy Christmas carols and distribute small gifts to strangers. Chapters of the Cacophony Society—and SantaCon—have since sprouted in dozens of cities around the world. 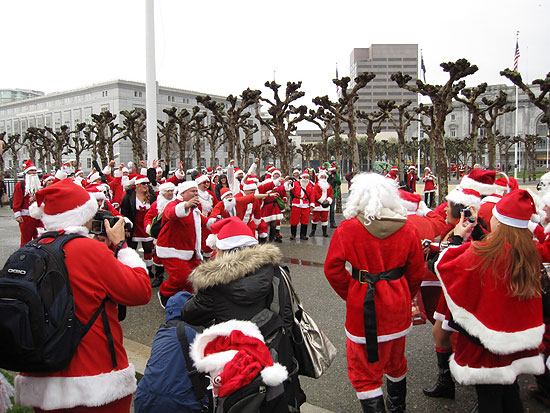 Cacophony Society members also are the originators of the best known and most influential participatory art project to come out of San Francisco: Burning Man. The annual cultural event takes the form of Black Rock City—a temporary city in the Nevada desert. Aside from the most elemental civic infrastructure, Black Rock City is entirely generated by up to 50,000 participants who attend the event (organizers survey the city site and provide security, medical care, bathrooms, coffee, ice and an airport). What arises in the desert is a complex, open-source, user-generated urban infrastructure where creative participation, collaboration, generosity and self-reliance are privileged over the more traditional urban imperatives of commerce and efficiency. Because nothing at the event (except coffee and ice) is for sale, social interactions are unmediated by commercial transactions and tend to be casual, playful and unscripted. Living under these simple but comparatively radical conditions, inhabitants of Black Rock City develop new, immediate ways to connect and relate to each other.

The impact of the Burning Man project on the creative culture in San Francisco is probably as hard to quantify as it is to overstate. Suffice it to say that Burning Man may be the most elaborate, fully immersive experiment in participatory urbanism that has ever been devised. Burning Man also has generated a number of organizations that operate outside of the Nevada event, including the Black Rock Arts Foundation, a nonprofit arts organization that supports and promotes community-based interactive art and civic participation. The Black Rock Arts Foundation has provided funding for a number of local participatory projects, including PARK(ing) Day and the Ocean Beach Fire Pits, which provide safe, environmentally responsible beach bonfire sites that foster informal public interaction and connection.

Though intelligent people may disagree over the advisability or safety of some of these urban interventions, their impact on the contemporary cultural life of San Francisco is undeniable. And what many of these projects reveal is a motivation to weave a broad range of cultural practices into the fabric of the city, precisely because of the structure and composition of urban space. These interventions alter the character of public space because they actually take up public space, at least temporarily. They demand to be seen and heard. They seek to provoke critical debate around how urban public space is designed and allocated, and explore the range of values served by those allocations. Under ideal conditions, these interventions point out the limited range of normative behaviors accommodated by public space, potentially exposing the limitations of the comparatively rigid, strategic, technocratic urban planning process.

Recently, participatory tactics have begun to gain currency at the strategic level, as nonprofit organizations, cultural institutions and city agencies begin to realize the advantages of flexible, adaptable, temporary approaches to transforming urban space. Two recent projects involve tacticians operating with an existing business and a cultural institution, and both critically examine the production and consumption of food. Mission Street Food is an intermittent restaurant that operates from within an existing Chinese food restaurant on Mission Street. Two nights a week, the owners of the Chinese restaurant accommodate chefs who bring their own groceries and cook and serve food using the restaurant's existing infrastructure. The restaurant is invariably packed with local foodies, and the Chinese restaurant continues to serve its regular menu during the proceedings

By bringing food into the art context, the creators of OPENrestaurant seek to turn "the restaurant, its codes and architecture, into a medium for artistic expression which is made available to cooks, farmers, artists and activists as a way to explore issues around food and society."2 Held for one night every few months in a different art gallery, museum or cultural space, OPENrestaurant is created by three restaurant professionals, all of whom work at Chez Panisse. OPENrestaurant recently biked a 650-pound spit-roasted steer into the atrium of SFMOMA, where it was carved up and served to visitors at an event called Metal + Machine + Manifesto = Futurism's First 100 Years. 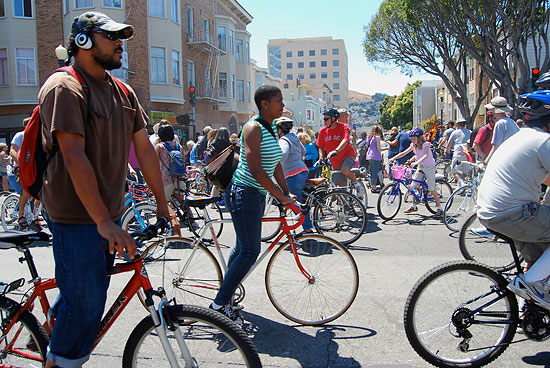 In the nonprofit world, the San Francisco Parks Trust's Street Parks program, in partnership with the San Francisco Department of Public Works, supports the development and maintenance of community-managed open spaces on City-owned properties, helping neighborhood groups beautify and use fallow public land. For those who do not own cars, City CarShare (which was launched from SPUR's offices) offers inexpensive, flexible, temporary use of automobiles.

The City of San Francisco has begun to use a number of these approaches as well, with ongoing, temporary exhibitions of public art around the city as well as the Pavement to Parks initiative, which converts fragments of urban space into temporary street plazas. On Sundays throughout the spring and summer, the Sunday Streets program converts major traffic thoroughfares into multi-use spaces for people.

Rebar, the art and design studio of which I am a part, is currently working on a number of projects that seek to combine these approaches with the resources of large organizations to fulfill a range of desirable public benefits. With the recent freeze in the trans-global credit markets, numerous development projects around the city have come to a halt, leaving large plots of our city, for the time being, economically, socio-culturally and ecologically fallow. We are currently exploring ways to form partnerships with developers to gain temporary or interim access to these sites, to convert these temporarily vacant lots into sites that produce a variety of social and ecological public benefits in the form of productive landscapes, natural habitats and storm water catchment systems, among others.

Within this examination of participatory urbanism, a larger question is at work: What is the proper role of the citizen in taking an active, participatory hand in improving the character of urban human habitat? Citizen-run, modular, flexible, decentralized participatory approaches to many urban problems may offer distinct advantages over traditional top-down planning strategies. And ultimately, technocratic and participatory approaches to urbanism, when combined, offer an extraordinary range of tools for improving the social and ecological health of the city. For example, as San Francisco prepares to spend billions of dollars to upgrade its combined sewer system, it may consider funding—for a scant fraction of the larger project cost—community groups to build neighborhood gardens, pocket parks and other landscapes that reduce the flow of rainwater into the water treatment system. The strain on this major infrastructural project could be reduced by some well-planned, small-scale urban interventions. There are plenty of creative types milling around San Francisco, and we are ready to help.

Matthew Passmore is a co-founder of Rebar, an interdisciplinary studio based in San Francisco that operates at the intersection of art, design and activism.