A look at how our region developed over time

When viewed from space, the Bay Area looks like it got some of the big planning moves right. The Bay itself is ringed by development, clinging tightly to the shore in San Francisco and the East Bay. Urbanization spreads out from there. But the overwhelming impression is that the region is ringed by green.

We got this first, big planning move right—and it didn't happen by accident. Far-sighted activists and planners worked over many decades to preserve open space through a combination of strategies: buying land and putting it into county parks districts and land trusts; zoning to preserve agricultural land; and establishing urban growth boundaries around cities. The emergence of what we now call the slow food movement is inextricably tied to the preservation of agricultural lands near to the urbanized parts of the Bay Area. And nothing contributes more to our quality of life than enjoying access to nature in areas so close to where we carry out our urban lives.

The problem is, we got some of the other big planning moves wrong. Come down for a closer look, and most of the urbanized parts of the Bay Area are built out at very low densities—so low that most people have to drive a lot in order to carry out their daily lives. Densities are too low for transit to work well and too low for most people to be able to walk to a neighborhood shopping district. This makes the Bay Area's carbon footprint essentially identical to the rest of America, which is shockingly high by world standards. 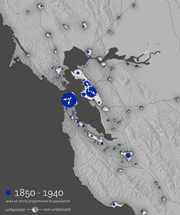 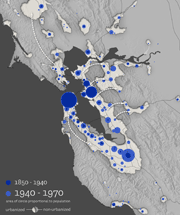 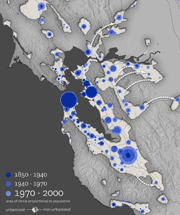 These diagrams, drawn by an urban planner and GIS specialist at AECOM, show changing settlement patterns of the Bay Area as it progressed from a monocentric region clustered around San Francisco to a polycentric one with contiguous growth along highway corridors and spilling over the hills to areas "off the map."