Perhaps no other city in America has benefited as much from the discipline of city planning as Washington, D.C. A pair of centuries-old plans have shaped the city we know today, while several recent plans have the potential to guide the city's future growth. What they share is scale, vision and their capacity to influence the urban experience for generations to come. 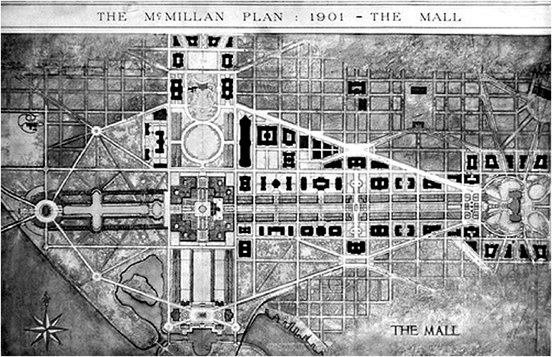 The McMillan Plan (Daniel Burnham's 1901 plan for Washington, D.C.). "The whole city was planned with a view to the reciprocal relations that should exist among public buildings," says the plan, which sought to emphasize the paramount importance of civic spaces. Image: National Capital Planning Commission.

PIERRE L'ENFANT, DANIEL BURNHAM AND THE CITY BEAUTIFUL
The 200-plus years of city planning in Wash-ington D.C. saw the creation of two monumental plans drafted by Pierre Charles L'Enfant and Daniel Burnham (the latter, called the McMillan Plan, was named after a senator from Michigan, James McMillan). In 1791, L'Enfant created the basic urban form of D.C. as we know it today: an orthogonal street grid criss-crossed by a series of diagonal boulevards. It also established the location of the Capitol Building atop Jenkins (now Capitol) Hill, connected to the "President's house" (now the White House) by a grand boulevard.

L'Enfant's vision was to create symbolic spaces that reflected the city's status as the capital of a new nation. The intersection of the narrower streets and grand diagonal boulevards produced magnificent view corridors punctuated, at their ends, by important civic monuments. L'Enfant's decision to locate the Capitol Building at the city's highest elevation — he called it "a pedestal waiting for a super-structure" — further reinforced the idea of the city as a cradle for a new democracy. Created in a matter of months, the plan formed the groundwork for all future planning efforts in D.C.

Over the next century, as D.C.'s population continued to grow, it became clear the city needed to integrate new public buildings, the development of the Mall and future parklands into the fabric laid out by L'Enfant's grand gestures. In 1901, the Senate created a commission composed of the era's most notable urban thinkers — Daniel Burnham, Charles McKim, Frederick Law Olmstead and Augustus St. Gaudens — to provide direction on these key issues.

Burnham, McKim, Olmstead and St. Gaudens were not strangers to each other. They had worked together on Chicago's Columbian Exposition in 1893 to produce a spectacular series of grand buildings and public spaces known as the "White City." To this day, the White City exemplifies the values of the City Beautiful movement, which held that classical architecture had the potential to "uplift" society and encourage a greater and more positive form of civic engagement. Like L'Enfant, the authors of the McMillan Plan looked to Europe for inspiration. They peppered their vision with references to the fountains of Versailles and Rome. They viewed their role as furthering L'Enfant's approach to shape the city as a "work of civic-art."

The McMillan Plan laid the foundation for the Mall we know today: gracious civic buildings bordering a formal promenade bookended by the Capitol Building and the Lincoln Memorial. It also established the north-south axis running from the White House to Tidal Basin, and created the Memorial Bridge symbolically uniting D.C. and Virginia.

While the McMillan Plan also bemoaned the state of the Anacostia River, which runs through the city's southeastern quadrant, its proposal for the Anacostia waterfront was not as fully developed as its plan for the Mall. Modern-day planners revisited the largely neglected waterfront in their plan for Washington's third century, which they entitled "Extending the Legacy." 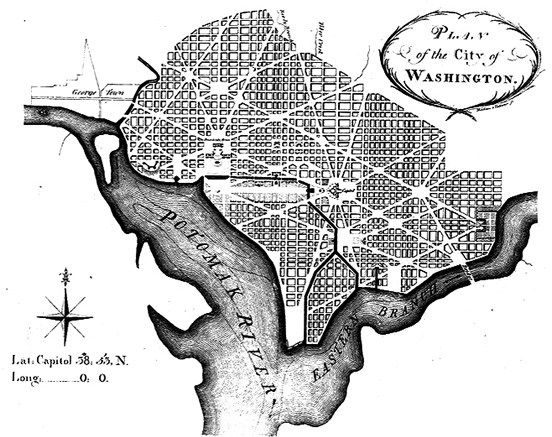 EXTENDING THE LEGACY:
THE ANACOSTIA WATERFRONT INITIATIVE AND THE MONUMENTAL CORE FRAMEWORK PLAN
In 1997, the National Capital Planning Commission (NCPC)1 proposed a plan to guide the development of the "monumental core" — an area encompassing the Mall, surrounding museums and federal agencies — for the next 50 to 100 years. With the McMillan Plan nearly built out, and the Mall on the verge of becoming over-programmed, planners were seeking a way to guide the growth of its future museums, monuments and federal buildings. At the same time, the city was suffering from years of population loss, disinvestment in low-income neighborhoods and bad urban planning decisions that led to the construction of freeways physically segregating the monumental core from the rest of the city. The plan's aim is seductively simple: to reconceive the Capitol as a new "center" connecting neighborhoods to the north, east and south with the city's waterfont. The plan urged for new museums, monuments and federal buildings to be located beyond the Mall and used as catalysts for economic development. Then, physical barriers such as the southeast-west freeway (I-395) should be demolished, restoring L'Enfant's vision of grand civic boulevards. Two recent initiatives build on NCPC's plan in important ways. Led by the District of Columbia Office of Planning, the Anacostia Waterfront Initiative Plan sought to change Anacostia's status as the city's "backlands," a site of toxic land uses and low-income households. (The river carried stormwater pollution from neighboring counties as well as overflow sewage from D.C.)

Here, planners saw an opportunity to make use of publicly owned land along the waterfront, and sought to tranform it by engaging in environmental clean-up, increasing access and creating mixed-use, mixed-income neighborhoods.

It is clear that D.C. is a city that believes in long-range planing. While the plans of L'Enfant and Burnham have demonstrated their clear benefits (and limitations), the legacy of the more recent

plans brought forward by NCPC and the Office of Planning remains to be seen. Connecting the southern and eastern parts of the city to the Mall holds great promise — to revitalize neglected corners of the city, increase prosperity and foster physical and socio-economic connections. There are some clear challenges — directing growth in ways that enable low-income communities to share in the benefits without being displaced, and ensuring that new development creates connections to and within neighborhoods instead of new barriers. Only future generations can be the judge of how well or how poorly this generation of city planners has met these challenges.

The "White City" at the The Chicago World's Fair in 1893. Image: WikiCommons.

A STUDY IN CONTRASTS:
WASHINGTON'S MONUMENTAL CORE AND SAN FRANCISCO'S CIVIC CENTER
At the turn of the last century, city planner and architect Daniel Burnham developed major plans for both Washington D.C. and San Francisco. While Burnham's plan for D.C. was largely realized, San Francisco's plan remains largely unimplemented, with the exception of several aspects of his plan for the Civic Center.

In laying out his plan for San Francisco, Burnham visited and drew inspiration from L'Enfant's design; Burnham's plan intended to bring imperial grandeur to San Francisco. Although the 1906 earthquake and subsequent fire offered a prime opportunity to implement the plan, the idealism of a formal, grand plan lost out to eagerness to rebuild the city quickly.

Today, San Francisco's Civic Center plaza— and its surrounding Beaux Arts buildings, including City Hall, state office buildings, the current Asian Art Museum and the Civic Auditorium — bears the clearest mark of this heredity. Indeed, Civic Center is often cited, along with the National Mall, as among the best examples of the City Beautiful aesthetic.

While San Francisco's Civic Center does bear the imprint of Burnham's vision, several key pieces of Burnham's Plan for the Civic Center were never realized. These include the creation of a rond point (a roundabout at the convergence of streets) at the intersection of Market Street and Van Ness Avenue; a new promenade connecting the rond point to an opera house; extending the panhandle to the Civic Center; and a different site for City Hall.

While D.C.'s Mall and San Francisco's Civic Center share a relationship to Burnham, formality and scale, they are very different places. On the Mall, majestic expanses are interspersed with tucked-away niches. Tree canopies juxtaposed with open, axial paths and strong ordering elements — the reflecting pool, for instance — comprise a layered landscape with a clear hierarchy of destination and circulation spaces.

By contrast, Civic Center's beautiful granite buildings spread across the wide expanse of the plaza, lacking a definitive edge to create a sense of place. Civic Center invites you to walk its edges, without engaging or being in Civic Center plaza. Its symbolic and ceremonial focus is only realized during celebratory and civic gatherings when, like the Mall, its open space invites crowds to exercise free speech.

Although the Mall's planning and design result in superior public spaces, it faces some challenges. Through the Monumental Core Framework Plan, D.C. is contemplating not just the placement of museums and monuments in locations beyond the Mall, but also strengthening connections from the Mall to these new locations. Here San Francisco may also offer some lessons, though unfortunately not very good ones. San Francisco's visually disconnected and non-axial series of destinations, such as the opera house and Davies Symphony Hall, are linked to Civic Center by a series of fast-moving thoroughfares (Fell/ Oak/ Franklin/ Gough). Their banal, unceremonious streetscapes and inadequate sidewalks prevent a cohesiveness among San Francisco's cultural resources.

Fortunately for San Franciscans, the failure to realize the entirety of Burnham's plan for Civic Center has presented opportunities for both housing and retail directly adjacent to the Civic Center itself. Unlike the Mall, Civic Center has the potential to better mesh with its nearest commercial neighborhoods: Mid-Market, Hayes Valley and the Tenderloin.

How might these world-renowned cultural buildings knit together government and neighboring commercial areas? Could a new Mid-Market plan turn Fulton Street into an appropriate terminus to Civic Center Plaza and connector to Market Street? San Francisco's own "monumental core" holds much promise — a promise it has yet to fulfill.

1 NCPC is the federal government's urban planning agency composed of representatives from various federal agencies and the District of Columbia.