Planning for the region in the year 2070 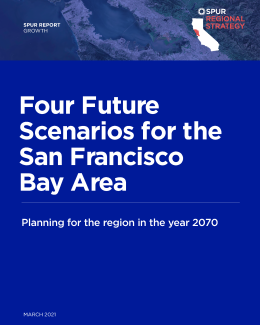 While some parts of the United States have struggled to find their footing in the face of deindustrialization, the San Francisco Bay Area has become an economic superpower. But the region has not been able to add enough new housing or create a functional transportation system in parallel with the economy’s expansion. The results include the highest housing prices in the country and brutal commutes for many people who live here. Those with the least wealth and power suffer the most, with some pushed into homelessness or out of the region altogether.

With all of its assets, the Bay Area can and should do better. The SPUR Regional Strategy, a multiyear initiative, aims to develop a vision for the Bay Area in the year 2070, along with the strategies needed to make it a reality.

This report, the first product of the Regional Strategy initiative, uses a scenario planning process to look at four uncertainties that the Bay Area will contend with over the next 50 years: the economy, housing, transportation and the physical form that growth takes. The four resulting scenarios serve as “myths of the future,” stories that reveal the potential long-term outcomes of today's choices. Will the Bay Area of 2070 be a Gated Utopia, Bunker Bay Area, Rust Belt West ... or New Social Compact? The answer depends on the decisions the region makes now.