Flexible Work Has Reshaped Downtown San Francisco. How Will the City Embrace the New Normal? 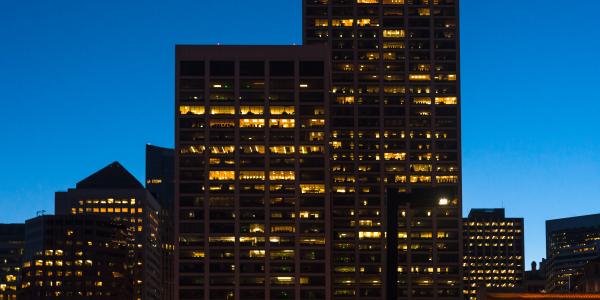 Downtown San Francisco has experienced significant changes since the onset of the COVID-19 pandemic. Reduced tourism and growth in remote work have resulted in a dramatic decline in economic activity. Despite the city’s efforts to encourage people to return to work, downtown is now characterized by semi-vacant offices, vacant storefronts, and an absence of employees and visitors. Yet a spin of the clock back to early 2020 would reflect a lack of progress on long-standing issues like traffic congestion, transit capacity, homelessness and inequality.

The economic recovery of downtown San Francisco is important to San Franciscans. According to the citywide SFNext poll conducted by the San Francisco Chronicle, 65% of respondents thought it was very important or extremely important for downtown businesses to bounce back from the effects of the pandemic. In addition to being a central hub for transportation, culture and the arts, downtown San Francisco generates the majority of the city’s business tax and commercial revenues, which pay for affordable housing, community facilities, infrastructure and other city services.

SPUR is launching an effort to identify structural, long-term solutions that the city, businesses, community members and other partners can pursue to best position downtown for recovery. As the first step in this work, SPUR is exploring some of the major trends that have affected downtown to begin to establish a shared understanding of the key challenges facing San Francisco.

Before the pandemic, about 6% of San Francisco workers were mostly working from home. By 2021, that share had risen to more than 45%. In the Bay Area, the share of employees working mostly from home was 33%. Compared to other cities and regions, San Francisco and the Bay Area have a high concentration of jobs that can be done at home, such as professional, scientific and technical services jobs. In the tech industry, the vast majority of programming jobs are listed as remote rather than on-site. A concentration of tech office jobs is one factor correlated with high rates of remote working. Another factor is long commute times. About 19% of the Bay Area region’s workers travel more than an hour to get to work, a commute rate second only to that for workers in the New York metropolitan area, according to the U.S. Census Bureau’s 2019 American Community Survey one-year estimate.

Share of Employees Working Mostly from Home, Before and After the Pandemic

Other large metropolitan areas with a large technology and professional services sector and long commute times, such as Washington, D.C., Austin and Seattle also had more than one-third of employees working mostly from home in 2021.

Percent of Employees Working From Home, by Commute Zone, 2021

At the onset of the pandemic, remote work patterns were thought to be temporary; workers would return to the office full-time once vaccines were more available and infection rates dropped sufficiently. However, over time, many employers and workers have embraced the opportunities offered by remote work to expand the supply of labor and offer flexibility. A recent survey from McKinsey showed that 87% of workers who have the option of working from home would like to do so part of the time. Stanford University economist Nicholas Bloom estimated that the value of hybrid work is equivalent to an 8% pay increase for employees and that workers who were given the option of working from home part-time were less likely to quit. Notably, Bloom also found productivity gains from remote work because workers were able to reallocate commute time to work and to dedicate more of their time at home to “focus” work. Moreover, hybrid work and remote work have improved job satisfaction and “sense of belonging at work” for Black and Latinx employees, according to Future Forum’s survey of 10,000 workers in 6 countries.

“Sense of Belonging at Work” Scores by Race/Ethnicity

Trend #3: Office Occupancy Rates Are Hovering at Two to Three Days a Week

Any recovery plan for downtown San Francisco will start with an understanding of the pandemic’s cascading effects:

How Can San Francisco Define a Shared Vision for Recovery?

It’s clear that flexible work is sticking around. Downtown San Francisco will not return to the way it was in 2019. Nor is that outcome desirable, given downtown’s many pre-pandemic challenges, including traffic congestion, limited transit capacity, increasing homelessness and widening inequality. Uncertainties about other future trends should not get in the way of planning for the recovery. This period of transition offers an opportunity to revisit the successes and failures of the pre-pandemic downtown — to “build back better.”

As San Francisco continues to plan for its recovery effort, SPUR is eager to help define a new shared vision for downtown by answering a few critical questions. How might the land uses downtown become more diversified and contribute to the city’s economic and social goals? How might San Francisco ensure that future economic growth leads to shared prosperity? If visiting downtown is a choice and not a work requirement, how can the city create more reasons for people to be downtown and feel that they belong there?

SPUR looks forward to further exploring these questions in partnership with civic leaders, local government and the community. We are confident that much can be done right now to create a long-term vision for a stronger and more resilient downtown San Francisco. The decisions that the city’s leadership takes in the next year will be critical.