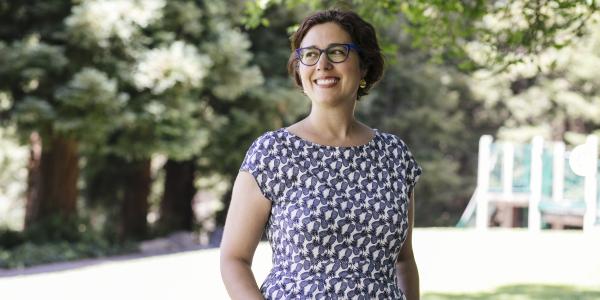 This year, SPUR is celebrating staff members — a.k.a. “Spurritos”— who have served the organization for 10 years or more. This month we profile Sarah Karlinsky, SPUR’s senior advisor, who has held five different roles since she first started at the organization in 2005.

Sarah is admired by her colleagues for her skill at policy research and writing, as well as her emotionally intelligent approach to management, collaboration and negotiation. She has produced two epic policy report series for SPUR, The Resilient City and Housing the Region, a form known as the Karlinsky Exegesis. A writer of fiction and teller of hilarious stories, Sarah is adept at using metaphors and analogies to explain complex policy terms or ideas. She’s also introduced dozens of entries in the Spurrito lexicon, including "responsortunity,” the helpful reframing of a responsibility to others as a potentially pleasant learning experience for oneself.

What drew you to the field of urban policy and working at SPUR?

I grew up in a streetcar suburb of Boston. As a teenager, I was drawn to the city. Everything was more exciting — you could walk around and see interesting things and meet interesting people. I loved going to Harvard Square and watching the skateboarders in the Pit, I loved going to punk rock shows, ska shows, whatever shows my friends and I could get in to see. I was more of a lurker, seeking proximity to coolness and freedom. It was a welcome contrast to my daily life of studying and nerdery.

I decided to go to college in New York City, and my love of cities just grew. I stayed up late, took the subway everywhere, went to see music, readings — everything. I walked from one end of Manhattan to the other just for fun. I took a class on the History of the City of New York with Kenneth Jackson. He led this all-night bike ride through the city, which was amazing. We went to the Fulton Fish market at 3 a.m. and watched the sunrise from the Brooklyn Bridge.

After college, I taught middle school social studies in Baltimore through Teach for America. It was the toughest job I have ever had. My students were these wonderful lively young people, but I struggled to find ways make the curriculum meaningful for them. It was hard to teach civics when my students felt treated unfairly by the police, when there were so many drugs in their neighborhoods, when they had to take care of younger siblings after school instead of just getting to be kids. In my second year of teaching, I adapted a project my sixth grade teacher, Mr. Rubel, had taught called “mytropolis,” where we designed and built a city. My students got really excited about it. We created zoning districts, they purchased “lots” (which were floor tiles) and then they designed and built models of homes and businesses.

I was also thinking about planning every day because the starkness of racial and economic inequality was so visible. Why were most of the people who lived in the wealthy suburb where I grew up white, while many of my students, all of whom were living in low-income communities, were Black? Some of my students had never left their neighborhoods. They didn’t know what was out there beyond their immediate surroundings. The depth of inequality, and the way cities and regions reinforce that inequality, was haunting to me. I decided to go to school for urban planning and public policy to see if I could make change on a larger scale.

How did you go from that experience to working at SPUR?

After graduate school, I moved to California and got a job developing affordable housing on the peninsula with Midpen Housing. I learned so much about how housing actually gets built, and I saw NIMBYism up close when neighbors opposed affordable housing in their communities. I saw how wealthy communities can close their doors to low-income people through housing policy. Many wealthy cities were zoned for large-lot single-family housing, which made it nearly impossible to build more affordable multifamily apartments. This was an invisible way of reinforcing segregation throughout the region.

After four years of being an affordable housing developer, I was ready for a change. My friend invited me to a party at the house of her friend, this very intense man named Gabriel Metcalf. He had strong feelings about everything: buildings (they should be tall and right next to BART stations), cars (they were very bad) and taxes (it was okay for them to be high, but public services should be very good as a result).

Gabe had just become SPUR’s new executive director. He was looking to hire someone to be SPUR’s policy director, and that someone ended up being me. At the time the policy director did everything related to physical planning in San Francisco: I was the housing policy director, the transportation policy director and the community planning policy director all in one. Greg Wagner was our good government policy director: He worked on papers about HR and contracting reform and knew all about the city budget. The three of us basically handled all of SPUR’s policy work in my first year at SPUR. After Greg left to join the mayor’s budget office, we hired Egon Terplan and started exploring all sorts of policies related to economic development and regionalism. There was nonstop brainstorming in the conference room. We went through a lot of whiteboard markers.

How did you learn the ropes of policy work at SPUR?

During my first week on the job, Gabe brought me down to San Francisco City Hall to attend a Land Use Committee hearing. He introduced me to George Williams, who had been instrumental in crafting San Francisco’s 1995 Downtown Plan. Gabe basically said, “Follow George around and go to meetings with him.” George was working on a piece of legislation called Better Neighborhoods Plus, which was intended to achieve the holy grail of policy outcomes: neighbors provide upfront input about the rules of development in their communities, and developers have greater certainty that their proposals will be approved. I sat through meeting after meeting in which advocates of all stripes argued with gusto about the details of this legislation. And then after seven versions of re-writes, the legislation died at the Board of Supervisors. It was a fitting introduction to the world of San Francisco land use planning and a good education to boot.

I attended a lot of hearings. This was in the pre-Zoom days, when all public comment had to be given in person and some hearings ran late into the night. I learned to knit to pass the time, and I still have two scarves that I call my “Eastern Neighborhoods scarf” and my “10 and 11 scarf” after the sections of the Planning Code that were modified at those hearings.

What has changed the most about SPUR in the years since you started here?

So much has changed. When I started, SPUR was located on the third and fourth floors of a somewhat dusty building on Sutter Street. We only worked on San Francisco issues. We were a staff of around 12 to 14 people. Contrast that with today: a staff of 36 (and growing) working in San Francisco, San José and Oakland, as well as on state-level policy.

The type of work that SPUR does has also changed substantially. During Alicia John-Baptiste’s tenure as CEO, we have broadened our focus to center equity as deeply as we center sustainability. That is a huge change for our organization, and you can see it in the type of work we do (such as adding an Economic Justice policy area) as well as in the way we do that work.

What accomplishment at SPUR are you most proud of?

The Housing the Region report series that I worked on with my wonderful former colleague Kristy Wang is a recent example of the type of deep, big-picture thinking that is really exciting to wrap one’s brain around. We tackled an almost unanswerable question: “How do we create an affordable Bay Area?” I’m proud that we actually finished that big sprawling project and made a contribution to both SPUR and the region by laying out a comprehensive vision of what the Bay Area could be if we actually addressed the housing affordability crisis.

But the thing I am proudest of is serving as the connective tissue for the organization. I never imagined I would be at SPUR as long as I have, and in some ways it’s a completely different organization than the one I first joined. But in many ways, my job has had steady throughlines: I’ve been doing policy work, stepping into management roles when needed and helping us get through the ups and the downs and the tricky times: The times when everyone is crying because the project is too hard and they don’t know how to finish it, and the times when we miraculously do finish it. The times when a mayor calls and yells because they don’t like what we said, and the times when a planning director decides to act on one of our recommendations. The times when our legislation dies — and then the glorious moments when it is revived in new form.

Helping the organization — and the people in the organization — through all of the changes over almost 20 years has been a truly remarkable experience. You can learn wonderful things when you go new places, but there is also something incredibly powerful about staying with an organization over a long period of time.

What do you do when you’re not working at SPUR?

My son, Simon, is autistic. Being a parent to an autistic child has completely transformed my life. Traits I once so deeply valued — being able to respond wittily to questions, being able to quickly summon and share knowledge verbally — I have needed to question in a profound way. There are so many different ways of being “smart” and of perceiving and engaging with the world. And there are so many things to notice when you are open to noticing them — like how marvelous the elevators are at the Transbay Terminal because the doors are transparent and you can see the floors go by as you go up.

Much of my time outside of SPUR is spent with my family, doing things with Simon, my husband, Matthew, and our dog, Sugar. We are a very tightknit unit. We do a lot of things that are experiential and can be engaged in through doing, through touching with one’s hands. The other weekend we went to the new Presidio Tunnel Tops park, where there is a wonderful play area for kids to dig in the sand and get things wet. My son loved playing there, and being somewhere so beautiful while he was playing made us all happy.