Greetings From 2070. The Bay Area Is Thriving. Here’s How We Staved Off Dystopia 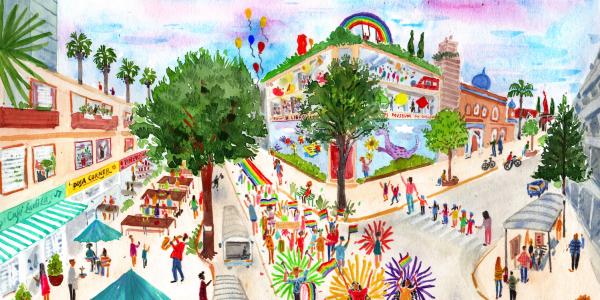 This op-ed originally appeared in the San Francisco Chronicle. Read SPUR’s 50-year vision for the Bay Area at spur.org/regionalstrategy.

Remember the summer of 2021? Everyone was thrilled that COVID was largely contained and that California was reopening. But that sense of relief didn’t last long.

Housing was too expensive. It was obvious that only the wealthiest would soon able to afford to live anywhere near the coast. More people were falling into homelessness. Workers moved further and further away from job centers to find affordable housing, only to spend four hours a day in traffic getting to and from work. That is when they weren’t escaping from terrifying wildfires, which were on the verge of befouling the air for six months out of the year. Coastal cities were just beginning to realize the gravity of their battles with ever-rising seas. Inland cities were experiencing terrible heat waves. Drought was everywhere.

But that was then. By 2070 we were able to create an amazing Bay Area. We turned a region on the precipice of dystopia into a sustainable, affordable and equitable place to live.

How did we do it?

It began way back in 2022, when Californians passed state and local laws to build more apartments near transit and along commercial corridors. By 2037, taller apartment buildings with stores on the ground floor lined Bay Area streets next to BART and Caltrain routes and along commercial corridors like El Camino Real. Hundreds of thousands of families moved in. Now they catch trains or hop aboard electric buses to get where they need to go instead of driving.

Just reshaping areas near transit wasn’t enough, of course. In 2023, NIMBYs, YIMBYs and everyone in between finally agreed to set aside their differences and dismantle the structural racism that was driving so many bad land-use decisions. We agreed that the government unfairly helped white families purchase homes through federally backed mortgages in the 1940s and 1950s, while excluding Black families. These racist decisions hadn’t been remedied and had dire consequences for public health and equitable wealth distribution, even in the 2020s.

By 2032, affordable housing was everywhere. Other countries like Denmark had been building this housing for years by making it faster and easier to build. So we learned from them by expanding funding mechanisms and streamlining the permitting system.

There was, however, still the problem of climate change.

In 2021, the Bay Area was still built around the car — even thought that was already an outdated and unsustainable way of living. Electric cars were fine for some, but what we really needed were alternatives to driving alone. This would mitigate climate change while also making sure people could get where they needed to go efficiently and cheaply.

As we started building more concentrated housing, we planned and built out a comprehensive network of efficient electric buses, with exclusive lanes so they could easily move through cities. Many urban freeways became obsolete. So we removed them in 2027, reconnecting long-disrupted neighborhoods. We invested in rail in the areas that needed it the most. The second transbay rail tube, which finished construction in 2040, further helped connect San Francisco and the East Bay.

To combat rising seas, we started restoring the wetlands that provide natural buffers to ocean intrusion. Communities across the Bay pooled their resources to target areas most at risk, instead of those with the most money. We also added parks and street trees to protect lower-income neighborhoods from extreme heat waves.

Then there were the wildfires. Those presented an enormous challenge to the entire state. First, we stopped adding new housing and jobs near wilderness areas and created open space buffer zones to protect our communities. By 2030 we had a new protective park system, which we nicknamed the Bay Area’s “green necklace.” We also started doing more sustainable controlled burns and retrofitting existing housing in wildfire areas to limit the damage.

In 2035 we decided to switch all new buildings from fossil-fuel burning furnaces to electric heat pumps, which act as a heater or air conditioner as needed. We also ditched our dirty gas-burning stoves. In 2038, we completed construction on a series of recycled water plants, and mandated drought-tolerant landscaping, which left more freshwater in the Delta.

This future may sound unattainable. It isn’t — but we’re going to have to make significant changes to in order to make it a reality, starting right now.

The first step is going to be the hardest but also the most important: changing our mind-set about what is possible. Achieving sustainability and equity demands a willingness to adapt — and to find better ways to work with one another.

We can live in a region that is affordable, sustainable, racially just and easy to get around. But to get there, we have to believe such a future is possible and insist that our elected leaders make that vision a reality.