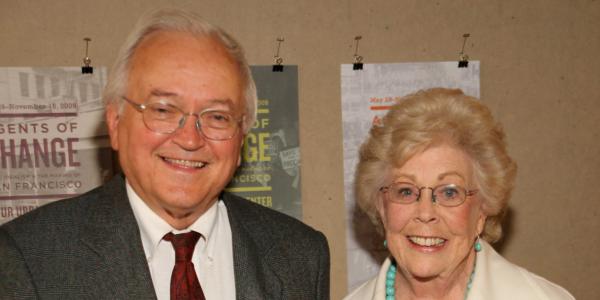 George Williams and his wife, Sally, at the grand opening of the SPUR Urban Center in 2009. Photo by SPUR.

City planner, former SPUR Board member and long-time SPUR volunteer George Williams passed away on November 7. George had an extraordinary career, working first in law and then in city planning, helping to develop the federal government’s Model Cities Program in the 1960s. The deputy director of San Francisco’s Department of City Planning for 20 years, he was instrumental in creating San Francisco’s 1985 Downtown Plan, which set the trajectory for the city center’s growth for decades to come.

George dedicated countless hours to SPUR projects over the years, including (but not limited to): Secondary Units: A Painless Way to Increase the Supply of Housing, the Planning Department Reform Agenda and the Future of Downtown San Francisco. He would often quibble with us about planning and policy matters, always making excellent points, then crossing his hands over his chest and leaning back in his chair, ending his argument with a smile. George generously shared his considerable knowledge of planning in San Francisco, engaging us in debate and driving us around in his paper-strewn Jaguar to look at different sites and discuss planning matters.

George spoke fondly of the bleachers set up on Sansome and Market streets in the 1950s that allowed passersby to observe the construction of the Crown Zellerbach building (One Bush). As the first major building to go up in San Francisco since before the Great Depression, the modernist “tower in a park” high-rise provided quite a sight for downtown workers and visitors at the time. He also proudly pointed out how the office and hotel tower at 345 California Street carefully retained the existing neighborhood fabric by keeping historic buildings on all four corners and inserting the high-rise inside the block. The city’s transfer of development rights policy (which allows owners of historic properties to sell their unused air rights to other developments) saved dozens of historic structures downtown and was an example of the kind of innovation that came out of George’s time at the San Francisco Planning Department.

Another policy innovation from that time was the Downtown Plan’s requirement that major development projects include publicly accessible spaces such as plazas, terraces, atriums or small parks. Some of our favorite memories of George comes from his love for and work on these privately owned public open spaces (POPOS). At a SPUR forum in the 2000s, members of Rebar, a collective of young urban designers and artists, were giving a presentation on their work to promote POPOS. The group sought to make POPOS function better as public spaces, fearing that most people didn’t in fact know the spaces were open to the public. At the end of their presentation, they posed a provocative question to the audience: Why didn’t the planners who created these spaces do a better job of making them more accessible? George stood up and said, “I am one of the planners who created these spaces, and you are right. They should be more accessible.” He, along with his former planning department colleague Eva Liebermann, offered to work with Rebar to figure out how to improve these spaces. The result was SPUR’s report Secrets of San Francisco, as well as a number of tools that have made these spaces more visible and accessible to the public.

One of George’s favorite hidden downtown public open spaces predated the Downtown Plan’s requirement for POPOS. Take a walk along the west side of Front Street between Pine and California and look for the tiny sliver of a walkway alongside the entrance to a garage. Follow it back, turn right up a set of stairs and think of George as you take a seat in this tiny downtown oasis.

SPUR recorded George talking about some of his favorite spaces in downtown San Francisco. You can listen to his commentary by clicking the pins on our interactive map.

Here’s George giving an introduction to the project:

George Williams truly loved planning and vigorously argued for the critical role of planners and planning departments in helping shape cities for the better. We were lucky to spend time with him and learn from him. We will greatly miss George, and we’re grateful for his years of service to SPUR and to the City of San Francisco.