The IRA Is Historic, but We Still Need Prop. 30 to Fight Climate Change 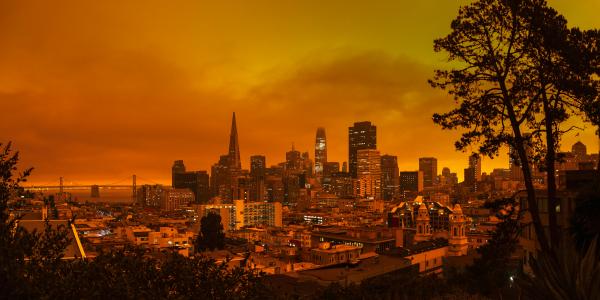 The Inflation Reduction Act (IRA), signed by President Biden last month, is the largest ever federal investment in fighting climate change. While we as Americans should be taking a victory lap for this momentous achievement, we should not for one moment think that the investments in the IRA are alone sufficient to tackle climate change. To win this generation’s greatest fight, we will need major continued investments at the federal, state and local levels. And given the urgency of the climate crisis and the catastrophic wildfires, drought, heatwaves and floods that are ravaging our state, we need those investments now. That’s why SPUR is supporting Prop. 30, a measure on the California ballot this November that would make historic investments in fighting climate change — investments that pay off in the form of fuel cost savings and avoided premature deaths, asthma attacks and cleaner air.

Neither the United States nor California is on track to reduce the emissions from the transportation sector fast enough to meet our collective climate goals. For instance, California has a goal to be carbon neutral by 2045 — just 23 years from now. But as of last year, more than 97% of cars and light duty trucks in California were still powered by fossil fuels. We need to phase out fossil-fuel powered vehicles altogether, and right now we’re not on track to do that quickly enough. Recent estimates have California meeting its climate targets 100 years too late. Climate change is only accelerating and we’re not keeping up.

According to the California Energy Commission, as of late 2020, our state is almost 1 million chargers short of the number we need to build by 2030 at public destinations, workplaces, and multi-unit dwellings.

Eliminating carbon emissions from our transportation sector — one of the economy’s biggest pays off big time. A recent analysis commissioned by the Natural Resources Defense Council and done by a former California Air Resources Board deputy director estimates the incremental up-front costs of electrifying California’s transportation sector is about $150 billion —  but the benefits of that transition in terms of fuel cost savings, public health benefits and avoided global warming pollution add up to nearly $1 trillion. Prop. 30 would provide about $80 billion for zero-emission vehicles and charging infrastructure (more than half of that incremental cost). It’s an investment worth making to help secure nearly $1 trillion in benefits. Prop. 30’s investments would primarily support low- and middle-income Californians purchasing zero-emission cars and trucks; businesses and governments purchasing zero-emission cars, trucks, buses and other vehicles; and building out the private and public charging and fuelling infrastructure needed to support the growing number of zero-emission vehicles. Another analysis, by California Environmental Voters, estimates that helping low- and moderate-income Californians transition to zero-emission vehicles alone would cost $88 billion, with an additional $8 billion needed to provide those Californians with sufficient charging infrastructure.

The Inflation Reduction Act provides an important downpayment. It is estimated to provide $12.5 billion in incentives nationwide for individuals and companies to purchase new and used zero-emission vehicles. If apportioned equally by population, the IRA would only provide $1.5 billion in zero-emission vehicle incentives for California. A good start, but not nearly enough.

In the near term, however, the IRA will actually reduce the federal incentives available to purchase new zero emission passenger cars. Starting in January 2023, the IRA does not provide incentives to purchase vehicles with batteries assembled outside of North America or batteries with raw materials mined or processed outside of North America. The existing pre-IRA federal incentives expire at the end of 2022 and, as a result of these restrictions, many vehicles on the market today will no longer be eligible for IRA incentives. Industry experts estimate it will take several years to build battery factories and facilities to process critical raw materials outside of China.

Similarly, the IRA is estimated to provide $1.7 billion in incentives nationwide to install charging and fuelling infrastructure for zero-emission vehicles. If apportioned proportionately by population, the IRA will only provide $200 million in charging and fueling investments for California. Again, important investments, but not nearly enough.

These investments would also be difficult to access in communities where many of California’s most vulnerable people live. The IRA puts in place strict limits on where charging and fueling stations must be installed to benefit from the federal incentives. These limits are meant to ensure that charging and fueling infrastructure is installed in lower income communities, which is a goal that we support. But the way the limits are designed does not work well for California. SPUR analysis shows that the majority of Latino and Black Californians (over 9 million people) live in census tracts that would not be eligible for the IRA incentives to install charging or fueling infrastructure. Similarly, 42% of California households who live in poverty (over 650,000 households) are in census tracts that are not eligible for federal charging and fueling incentives. Similarly excluded are almost 4 million Californians who live in communities identified by the California Environmental Protection Agency as suffering most from economic, health and environmental burdens. 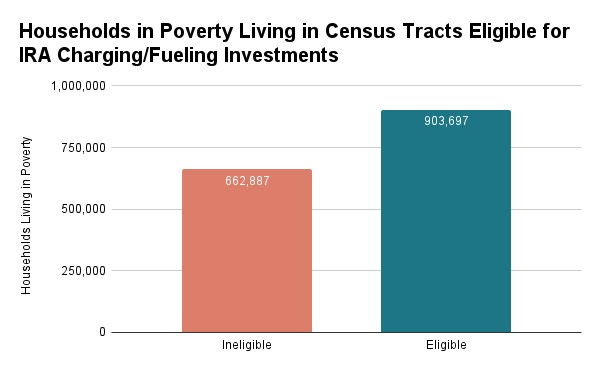 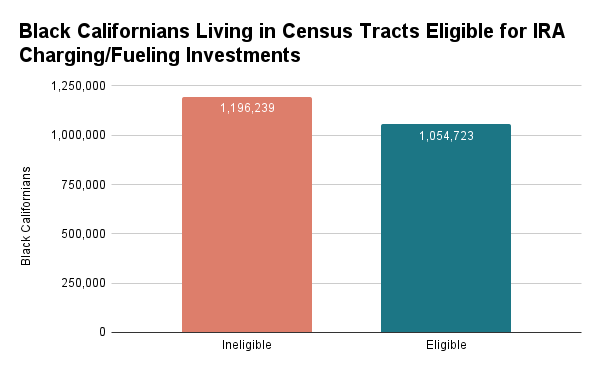 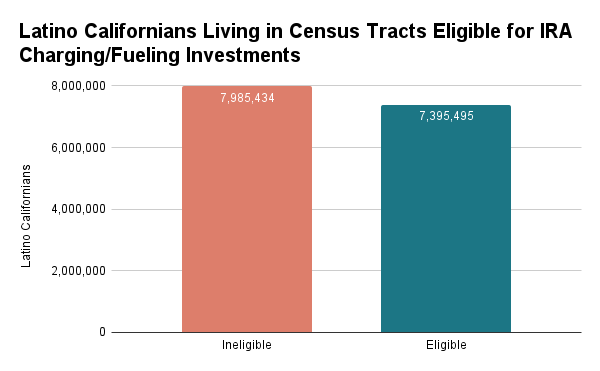 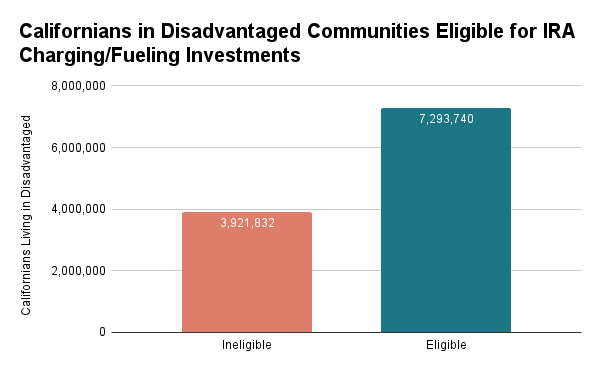 In addition to providing some support to families and businesses transitioning to zero-emission vehicles, and limited support to install charging and fueling infrastructure, the IRA provides tens of billions of dollars in grants and loans for auto manufacturers to build zero-emission vehicle factories in the United States. This includes funding to build out battery factories and critical mineral processing facilities. While these investments, along with investments in the Chips and Science Act, help increase the supply of new zero-emission vehicles, they do little to support people purchasing these vehicles. For the last two years, given one-time state budget surpluses, the State of California has sought to augment federal investments by committing $10 billion to investments in zero-emission vehicles and related charging and fueling infrastructure. Again, an important investment, but these are only one-time funds and not alone sufficient to meet our long-term goals.

It is also not possible to simply mandate our way to zero-emission vehicles. Regulations like the recent decision by the California Air Resources Board to phase out the sale of fossil fuel-powered vehicles in California by 2035 are critical to meeting our transportation goals. But we need both carrots and sticks. Without incentives, for instance, low- and moderate-income Californians will not be able to afford to purchase a zero-emission car, regardless of what goals the state has set. To reach its goals and to ensure low-income communities share in the benefits, the state must provide financial support to help households and businesses make the transition.

This November, California voters will have an opportunity to fill in these gaps and make the scale of investment necessary to clean up our transportation sector and transition to zero-emission vehicles. Prop. 30 would invest $100 billion over 20 years in reducing greenhouse gas emissions and air pollution from transportation and catastrophic wildfires. $80 billion would be invested in zero-emission vehicles and zero-emission vehicle charging and fueling infrastructure — almost 10 times the projected existing state and federal investments. This investment would dramatically leverage existing state and federal investments. Prop. 30 also requires that 50% of these investments benefit people in low-income and disadvantaged communities, supporting the purchase of an electric vehicle, for instance, or providing free transit passes on zero emission buses.

Forthcoming analysis by the Wildfire Conservancy also found that the additional resources Prop. 30 would provide to fight and prevent catastrophic wildfires would prevent 300,000 to 500,000 acres a year from being burned. Using the average of 400,000 fewer acres burned from the Wildfire Conservancy report, Prop. 30 will result in an economic benefit to Californians of $11.8 billion in a typical year. The benefit includes avoided losses of life, health, structures, business activity and resources, as well as savings to federal, state and local governments. That’s a 12-to-1 pay-off from the roughly $1 billion annually Prop. 30 would provide in additional resources dedicated to preventing and fighting catastrophic wildfires, which are the biggest impact of climate change in the state. The smoke from those increasingly deadly and destructive fires also threatens to undo the gains we’re making in addressing tailpipe pollution. In sum, we need to address both the transportation sector and catastrophic wildfires, which is exactly what Prop. 30 does, yielding huge benefits to Californians.

These investments in zero-emission vehicles and catastrophic wildfire suppression and prevention would be paid for by a modest increase in state income taxes of 1.75%, on personal income over $2 million (someone who makes exactly $2 million annually would see no increase). Only the top 0.2% of California income earners would see a tax increase.

SPUR helped develop Prop. 30 specifically to address the lack of stable long-term funding available at the state and federal level for addressing climate and clean air, and as an example for how California and other states can step up to fight climate change. Now that the IRA has passed, let’s double down and pass Prop. 30 so we can meet our climate, air quality and equity goals, and do what we can to save our state from the catastrophic wildfires, drought, heatwaves and flooding. It’s an investment that will pay off.