Finding a Way to Build: Can the Bay Area Learn from Copenhagen’s 1990s Reinvention? 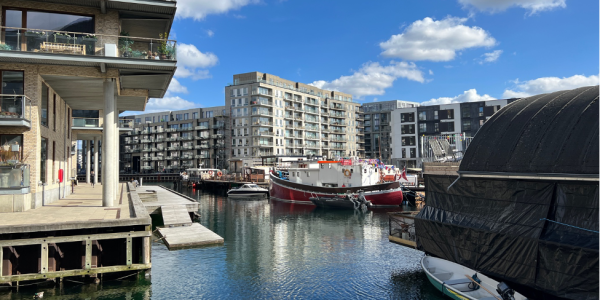 These recently completed residential buildings at Enghave Brygge in Sydhavn will be connected to a Metro Line opening in 2024. Historically the site served fishing and industrial uses and was known as “Devil’s Island.” Photo by Morten Jensen

This summer, after a two-year hiatus, SPUR resumed its annual study trip to learn from other cities around the world. See the bottom of this page for links to all of our articles on this year’s trip to Copenhagen.

By many measures the San Francisco Bay Area could not be more fortunate. It is the birthplace of the global digital economy and the environmental movement, known throughout the world for its tolerance, diversity and academic achievements. It has the highest GDP per capita among all major metropolitan regions and a natural setting celebrated around the world.

But the day-to-day reality for the average Bay Area resident is far less sunny. Apart from a few districts in San Francisco and Oakland, platted not long after the Gold Rush, the Bay Area is almost entirely car dependent, making significant CO2 reductions very difficult. The perpetual regional disconnect between where wealth is generated and where housing can be provided affordably forces many into dangerous and unhealthy living conditions, and tens of thousands have no permanent home at all.

Making progress on these challenges can feel daunting. Development costs have slowed the construction of new public transportation and housing, and the region’s fractured decision-making process has disillusioned many within the planning and development profession.

SPUR’s study tour to Copenhagen this summer presented a much different picture. The sheer number of cranes over Copenhagen revealed a city delivering projects by orders of magnitude beyond what is currently possible in the Bay Area. There are new well-planned housing districts rising up and down the harbor and on former industrial sites. New Metro stations are coming into service at a breath-taking pace, and the already extraordinary bicycle infrastructure continues to expand as the city’s primary transportation mode.

Throughout the city, older districts are being dependably improved with upgraded housing units, more jobs and urban spaces imaginatively reconceived to focus on the day-to-day public quality of life. Projects proceed from the planning phase through final implementation at an impressive velocity. Compared to the Bay Area, there are very few unhoused people, though the number is increasing. The city is aiming to be the world’s first capital to achieve net zero carbon status by 2025.

On the study tour, we learned from Copenhagen’s city department heads, philanthropic leaders and design professionals how the city had reinvented itself after its own existential crisis in the early 1990s. This was a time, we were told, when Copenhageners who could move did so — to the auto-oriented suburbs. The city was nearly bankrupt, its long-established manufacturing-oriented industries were failing and there was chronic entrenched poverty. We heard on several occasions how, in the 1990s, the then-lord mayor bitterly complained that there was only one crane in the city: It was not for construction, but for recreational bungee jumping.

Copenhagen was dealt a bad hand and knew it. Shifting limited resources from one constituency to another wouldn’t stop its downward spiral. The city’s leadership recognized that transformation would only be possible if it could add to its economic top line by attracting new residents, digital-era businesses and globally relevant investments to the city. Zero-sum thinking would no longer work.

To attract these new residents, businesses and investments, a coalition of local and national political leaders kickstarted a coordinated effort to turn the city around including greatly expanding new development and construction. The city and Danish national governments partnered to create public-private corporations to redevelop formerly industrial lands into higher value uses generating new tax revenues and financing transit and other infrastructure. To do this on a transformative scale, Copenhagen could also no longer afford the innumerable inefficiencies of competing and overlapping government agencies, which it would merge and substantially restructure.

The first of the redevelopment projects was Ørestad, a 1.2-square-mile former military base located close to the Copenhagen airport, and included building the Øresund Bridge that today connects Denmark to Sweden. To raise money for the new development, and for the metro lines that would connect to the area, the city and national government formed the Ørestad Development Corporation. The development corporation then sold the development to private investors with the expectation of capturing new value. This revenue was then directed toward funding the construction of public infrastructure, in particular the new Metro rail linking Ørestad and the airport back to central Copenhagen.

Today there is a palpable air of enthusiasm for the enhanced mobility, sustainability measures and improved overall quality of life that these redevelopment projects have created, including being able to swim in a cleaned-up harbor and people watch around the city’s many restaurant-lined public squares. There is an excitement about what the future will bring, how there will be even more innovative new projects, and how the city can be made even more beautiful and functional.

Making these changes was far easier in Copenhagen than it could ever be in the Bay Area due to the aforementioned foundational differences in how our governments operate. First of all, Denmark is a much smaller country and therefore more nimble in how it can enact changes. Its government agencies are structured to be much closer and more accountable to the citizens they serve. The Danish parliamentary system encourages a culture of compromise between its many political parties that compares favorably with the two-party winner-take-all battles typical in the United States. There is also a long tradition of collaboration between the public sector, private sector, unions, lending institutions and philanthropies.

Another foundational condition benefiting Copenhagen is Denmark’s welfare state, which includes free health care and stipends to attend college. This provides a durable safety net, resulting in less social division and far more trust in government. Social housing, rent control and housing cooperatives are pervasive and have long been baked into the city’s day-to-day functioning, allowing new growth and regeneration to occur with less displacement. On the study tour, we learned that several hundred years ago Danish pastor, author, philosopher and politician Nikolai Frederik Severin Grundtvig (1783-1872) established a societal and political practice that every person deserves a decent life, including a home that is not necessarily fancy, but safe, functional and even a little hyggelig (cozy).

Copenhagen and Denmark also benefit from a deep and constant analysis of demographics including income inequality. As the city generates new wealth, the impacts of new development are continually measured, so that the development policies can be further modified to prevent displacement and loss of quality life for its most vulnerable.

As a city founded in medieval times and substantially expanded well before the advent of cars, Copenhagen also had the advantage, even in the 1990s, of a development pattern that was far denser, ready-made for bicycling and walking. Greater Copenhagen also benefits from a robust regional passenger rail system, whose bones were laid out in the late 19th century, and an extensive open-space system throughout the urban center, established when the city ramparts were torn down.

Finally, another enormous advantage can be traced back to the 1970s oil crisis, when the city began to decarbonize by rediscovering wind energy and turning away from cars and back to bicycling. At that time, the government also took advantage of the district heating system that had been established over 100 years earlier. Copenhagen and its surrounding communities enacted legislation requiring that individual heating for residences and businesses be connected to this system to harness surplus heat from power plants and municipal waste-incineration plants. The system has been expanded ever since, making conversion away from fossil fuels far easier than in other cities.

With all of these differences, could the Bay Area emulate Copenhagen’s successes? On the positive side, both places share some common foundational benefits. These include a highly educated populace and a robust tradition of civic participation and environmentalism, as well as tendencies towards cultural inclusion as is needed in our globally interconnected world. Also, both regions benefit from being places where innovation is the norm, be it developing elaborate computer systems, buildings, furniture, urban spaces or taxation/financial systems.

We heard several times from our presenters that they had been inspired by the Bay Area’s home-grown environmental and people-based planning approaches, its informality and dynamism, its openness and tolerance. If there’s anywhere in the world where it’s possible to make transformational change, it should be the Bay Area. I would hope that the Bay Area could take some inspiration from how Copenhagen in the 1990s reorganized its government and, through new development, created new wealth that was responsibly shared. May we find the will and the leadership to do so.

Read more about the study trip:

The Sustainable City: Learning from Copenhagen's Plan for Zero Carbon

Housing for Everyone, the Danish Way

SPUR Board Member Morten Jensen is Founder and President of JRDV Urban International and works out of both Oakland and Copenhagen.