By Jim Chappell and Teresa Rea 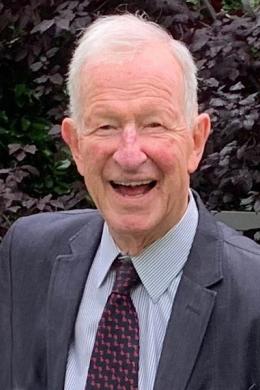 Dave had a lifetime of loving cities, history and architecture, which he manifested over decades of civic engagement. He spent 25 years at Sunset magazine at the time when Sunset defined California and western life. He served as building editor and then travel editor, helping to develop the burgeoning Pacific Rim travel industry. He thrilled to the international travel that he and his wife, Jane, undertook during this period and continued to travel for decades afterwards.

Dave was a board member and lifelong devoted supporter of San Francisco Heritage, working to preserve the best from the past and guide the growing city into a gracious future. This love of the history of the built environment resulted in his appointment to the San Francisco Landmarks Board by then-Mayor Dianne Feinstein.

When Dave joined the small SPUR staff in 1990, the annual budget was about $700,000. When he retired five years later, the operating budget had grown to an astonishing $1.6 million — and all of this at a time when we were also engaged in the capital campaign to build the SPUR Urban Center. We all watched in amazement each year as Dave set higher and higher goals for himself and, each year, met and exceeded them. His positive attitude and teamwork skills made him a fine colleague who welcomed the growing SPUR staff.

In the same period, our annual Silver SPUR Awards luncheon doubled from a thousand attendees to two thousand. Co-chairing the Silver SPUR committee, Dave ensured that all of the honorees we selected would both epitomize SPUR’s drive for urban excellence and draw large appreciative crowds. Jane helped with the floral arrangements and the tricky selection of a midday meal that 2,000 people could enjoy.

A voracious reader and a talented writer, Dave was able to convey SPUR’s value to the community like no one before, as demonstrated in his favorite quote from Jane Jacobs: “Cities have the capacity of providing something for everybody only because, and only when, they are created by everybody.” Always the gentleman, he enjoyed engaging in respectful debates about urban growth and preservation.

In his retirement, Dave kept working for SPUR as a volunteer member of the Board of Directors, co-chair of the Silver SPUR Committee and member of the Major Donor Committee. We at SPUR truly enjoyed working with him and will miss him dearly.

Jim Chappell is the former president and executive director of SPUR.

Teresa Rea is a long-time SPUR board member, chair of several SPUR committees and long-time co-chair of Silver SPUR.