Envisioning a Brighter Future for BART in San José 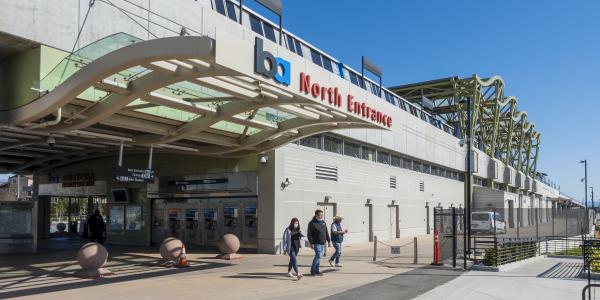 SPUR is a long-time supporter of BART Phase II, which will bring BART service into downtown San José. It is a critical project to the region, and SPUR is invested in its success.

The project gets many things right. Fundamentally, the arrival of BART in San José is intended to provide a faster, more predictable, more sustainable and more affordable travel option to people living and working in the South Bay — and it will. In addition, the project has two other goals: 1. to grow San Jose’s economic prosperity by making it possible for a lot more people to live and work downtown without needing to use a car for every trip, and 2. to make transit the first and best choice for many types of trips that are currently taken by car. In these areas we think the project can do better. For the many billions of dollars in public money that will be invested in this project, we think the project must do better.

We cannot ignore that BART Phase II bears the heavy weight of expectations. Santa Clara County residents have invested in this project for decades. Many question the essential role of transit in our changing world and doubt government’s ability to do big things. In SPUR’s view, the importance of getting this project right transcends the project itself. If it is successful, it can help spur a new sense of confidence and optimism in transit and in government institutions, which the region critically needs. Years from now, we don’t want this project to be known for how expensive it was, but for how deeply and positively it transformed the way people move, the way San José has grown and the way people think about their government.

VTA recently convened a collaborative four-party task force that includes VTA, the City of San José, BART and SPUR to work together to explore and evaluate opportunities to improve passenger experience and station access while retaining the current plan to use single-bore tunnel construction methods. We are optimistic that this process will result in a better project. The goal is to explore design changes that could make BART easier and more attractive to use, more seamlessly connect it to other modes, and make sure it maximizes opportunities to grow downtown while integrating thoughtfully with its urban context. This includes rethinking the number and location of station entrances — changes that can be incorporated into current and future procurements for tunnels and stations.

This article shares our goals for BART Phase II, how we hope these goals can be translated into the project design and our desired outcomes from the collaborative innovations process.

The Question of Tunneling

To date, there has been a lot of debate about the construction technology and whether to dig a single-bore or double-bore tunnel. To be clear, SPUR is not motivated by a preference for a particular tunneling methodology. Rather, our intent is to maximize the project’s benefits to ensure that the project is delivered cost-effectively and meets its goals.

Some of the more important factors for passenger experience are the number and location and layout of stations, and the location and layout of vertical circulation elements (e.g., escalators, stairs and elevators) that bring people from the street to the platform. These factors are shaped not primarily by the decision to construct a single-bore tunnel but by the decisions to avoid cut-and-cover stations and to locate the stations off-street and inside of the tunnel shaft (as shown in the center image of Figure 1).

We focus on stations because they are not simply places to buy tickets and board trains. They are the primary touchpoint with BART and key gateways to the city. People spend a significant part of their trips getting to and from stations, or waiting in stations. Stations can catalyze urban growth and define communities.

Ideally, these station entrances would be located at the ends of the platforms and both the sides of the street (in this case, the north and south sides of Santa Clara Street). Most other BART stations are designed this way, and with good reason: It is the best solution for mass transit systems.

Further, while we fully recognize the importance of implementation considerations such as cost, constructability, disruption, schedule and environmental approvals, we hope these will not be the overriding constraints. The cumulative benefits of any one of these proposals may justify a change to the project. It’s important to deliver the best possible project, not just deliver the project.

Additionally, we hope that VTA will find ways to bring down project costs without compromising the above goals. We care about both costs and cost effectiveness. Whether the project costs $6 billion or $9 billion, it can and should be a great project, but we hope it won't cost $9 billion.

Finally, we request that the assessment of tradeoffs take place openly and transparently, making it clear why certain options are either not feasible or not desirable. An over-emphasis on constraints is precisely the reason so many have raised concerns about the project.

Our hope is that BART Phase II will be designed for the next 100 years and will keep the customer front of mind in all design decisions. Santa Clara County residents can get more benefit from their investments if BART is convenient and welcoming to riders and makes it easy and quick to get to and from many different places in downtown San José, so that more people choose transit over driving. Now is the moment to evolve the current project design in order to maximize the project’s benefits for riders, the city and the climate. There is only one chance to build this project; the decisions made now will last for the next century.

See more information and renderings of the downtown station

Many thanks to Andreas Heym of Andreas Heym Planning + Design and Agustin Arizti of DB E.C.O North America Inc. for their thoughtful perspectives and collaboration with SPUR.