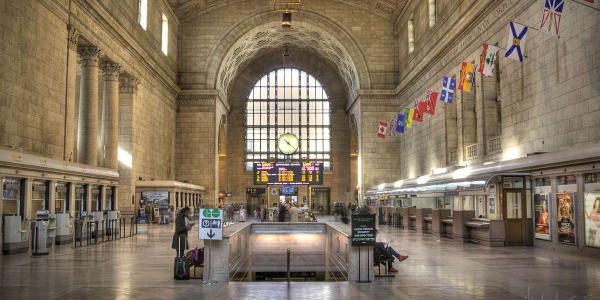 The next few months will be critical to the future of Diridon Station and the area around it. During this time, our public agencies are working together on several studies and planning efforts that will set the remaking of Diridon Station and the station area in motion. These studies will determine how transit and passenger facilities will be configured, how high-speed rail and BART will come into Diridon Station, how people will get to and from the station and the sequencing of projects and construction (which in turn determines design, project timelines and how seamless the overall passenger experience is both during and after construction).

During this critical period, it’s important to be thinking boldly about what’s possible for Diridon and how to achieve it. SPUR is looking at urban train stations and station districts around the world for best practices and cautionary tales. Last time, we wrote about Rotterdam Centraal. This post takes us to our neighbors to the north in Toronto, Canada.

Toronto’s primary transit hub, the historic Union Station, is nearing completion of a major revitalization project scheduled for completion in 2018. Its context and complexity make it a good parallel to Diridon. The remaking of Toronto Union Station included about a dozen different construction projects—bringing a unique level of complexity to coordination, station design, land assembly and other efforts. This makes Union Station a good analog for Diridon where there are many property owners and many transit operators all working to deliver projects at the station in a short window of time.

Toronto Union Station offers best practices for making a station accessible on foot and for improving pedestrian connections between transportation modes. It also offers cautionary lessons about the importance of early and consistent coordination in order to make many disparate projects come together as one unified place.

Originally built in 1927, Union Station was sold to the City of Toronto and the regional transit agency, GO Transit, in 2000. Six years later, the Toronto City Council approved a master plan to revitalize the station, and in 2010 physical construction began. Construction is expected to finish by 2018 and the total cost will be $609 million (U.S. dollars).

The redesign of Toronto Union Station has four key goals: 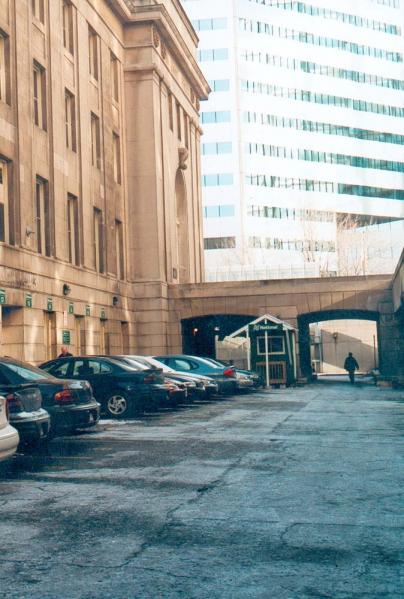 In the previous iteration of Toronto Union Station (pictured circa 2000), the main entrance to the station’s head house was accessed on foot from Front Street over a pedestrian bridge. Beneath it was a “moat” for car parking. Image courtesy Transit Toronto. 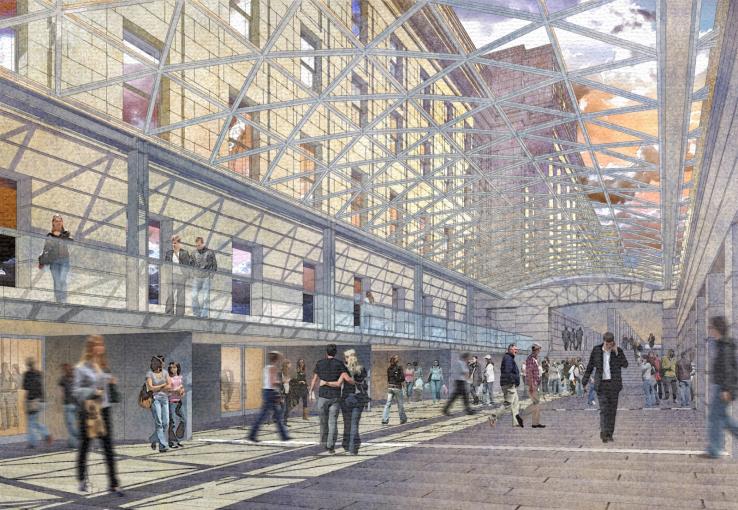 The new Union Station will be much friendlier to pedestrians and will help passengers move between transportation modes more easily. Where cars once parked, people will be able to walk in bright, open covered passages to the new retail concourse and the subway. Image courtesy NORR Limited Architects Engineers and Planners.

A Station for People, Not Parking

A major goal of remaking Toronto Union Station was to make it more pedestrian friendly. The new floor created by the dig down will have food, beverage and retail options, making the station useful to people who live or work near the station, whether or not they are boarding a train. Since the station is connected to downtown Toronto via an extensive network of underground passages, the new concourse and its amenities are widely accessible. Prior to the dig down, the station didn’t have much to offer to people other than its mobility functions. Osmington, a private developer and asset manager, filled this need and worked to create a great user experience by programming the station with food, service and retail offerings as well as special events and activities. The City of Toronto developed a wayfinding and signage system to brand the station as a place.

The “dig down” created a new underground floor that will be the commercial center of the new Union Station. Image courtesy the City of Toronto.

Outside of the station, there has been a concerted effort to limit parking and put it underground. Most of the new parking in the South Core neighborhood is built underground. Major venues in the area, such as the Air Canada Centre hockey and basketball arena and Rogers Centre baseball stadium, offer limited parking, and most people take transit to games and concerts. In addition, the city is removing an exit ramp on Gardiner Expressway to spur further development and make the area more pedestrian friendly. The pedestrian improvements and volume of new people in the area have largely overcome the barrier that the highway presented, though there is still some consideration of removing it altogether. For Diridon, the lesson is that creating a great urban place requires making the station area a place for people, not cars.

The remaking of Toronto Union Station involved 12 different projects, most of which overlapped or took place concurrently. However, each project was planned and implemented by a different agency, each with its own goals, timeline and budget. The table below shows all of the various projects in the station redesign.

Even though there were many projects underway at once, no single agency or project management team was responsible for coordinating them. The lack of coordination had an impact on the function and feel of the station, as well as the ability to deliver each project on time and on budget. Several problems resulted that could have been avoided:

These problems arose largely because no single entity had authority to oversee and coordinate the construction of each of the projects. The lack of coordination delayed the project timeline and increased project costs. It also had an impact on user experience during and after construction.

Toronto’s Union Station shows that the failure to coordinate early and consistently carries a heavy penalty of more time and more money. Many missteps can be avoided if someone is empowered to make decisions that benefit the station as a whole. At Diridon, it will be important for the California High-Speed Rail Authority, the Santa Clara Valley Transportation Authority, BART, Caltrain and the City of San Jose to be very specific about what each project entails, along with their timelines and dependencies, who is responsible for what costs, who is best suited for each task and who will execute each part of the project. Additionally, it will be critical to create a streamlined decision-making process for station construction with a single body overseeing it.

Furthermore, what happened in Toronto shows that the whole is more than the sum of its parts. Although all the operators and owners agreed on the goals, they were compromised by a lack of coordination and on-the-fly decisions during construction of each individual sub-project. For example, despite the goal of pedestrian connectivity, agencies hadn’t budgeted for key connective elements such as stairways because they weren’t directly in the scope of their projects. Missteps like those show that each infrastructure project must be coordinated from start to finish, with the ultimate goal of creating a great place and a great station. Each agency has a responsibility not only to their own project but also to the overarching vision for the station and station area as a whole.