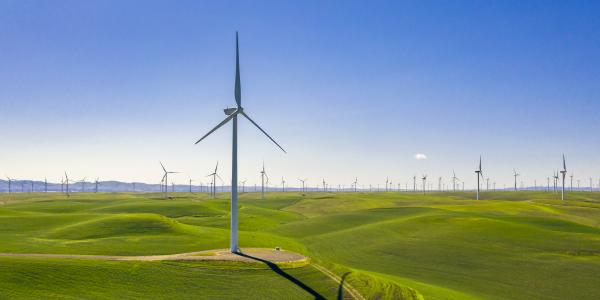 A new report tracking California’s progress toward meeting its climate targets just delivered some sobering numbers: Not only is our state behind on cutting carbon emissions, we’re dangerously behind. At the current rate, California will be six decades late in meeting its 2050 climate goals. Without deep cuts across all sectors, our 2030 climate targets may soon slip out of reach.

This year’s budget can be a weapon in the fight to address climate change: Governor Newsom has announced plans to spend $37 billion over the next six years on climate resilience. With the state projected to have a $45 billion budget surplus, SPUR and a statewide coalition of partners organized by California Environmental Voters is asking the governor to go even bigger by doubling that investment to $75 billion. These investments will set California on the path to be a leader in the clean-energy economy and safeguard communities against the potentially crippling effects of drought, wildfire and flooding.

The state can use its spending on climate change to remake the economy to be both more sustainable and more equitable. Spending on building decarbonization and water efficiency should build wealth in low-income households. Transportation should no longer be a source of pollution that primarily burdens formerly redlined neighborhoods. And all Californians should have secure access to healthy, low-emission food and homes close to public transit.

Doubling this year’s spending on climate is bold, but it is well within reach. 75 billion over six years is less than 5% of the state’s budget and will deliver long-term returns in the form of less climate pollution, more economic prosperity and more economic security. The state can pay for this in two ways. First, Governor Newsom should drop his proposal to send $9 billion in cash assistance to vehicle owners and redirect those funds to programs such as those SPUR proposes below, which will help low-income households to reduce their housing, food, water and energy costs.  Second, the state should re-prioritize its transportation dollars, which are almost entirely spent on roads and highways that degrade our environment and communities.

Eliminating fossil fuel use in buildings is vital to bring cities closer to their emissions goals. Accomplishing these goals won’t be easy; it will require a major budget investment to jump-start the clean appliance economy.

$1.2 billion over two years to electrify homes for low-income Californians

$600 million over two years for consumer rebates for building electrification

Climate change is intensifying the water cycle. For California that means longer, more frequent and severe droughts, punctuated by years of heavy rain, as we have witnessed this past decade. A more resilient and equitable drinking water system will be more efficient, will price water in accordance with its value, and will keep bills affordable for low-income Californians.

$750 million over two years for drought resilience, with  focus on alleviating impacts to low-income households

Transportation is the single largest contributor to greenhouse gas emissions in the state. Yet public transit is facing a serious fiscal cliff due to slow ridership recovery from the pandemic. A staggering 98% of California’s transportation dollars are spent on roads and highways, leaving transit fighting for scraps. The federal Bipartisan Infrastructure Law and the state surplus provide an important opportunity to remake the transportation system to benefit our climate and communities.

$450 million over two years for a "race to the top" program for transit agencies to pursue systemic reforms to make transit seamless, equitable and sustainable.

$5 billion or more over two years for transit, distributed by formula, with flexibility to use the funds for operations. Of the governor’s proposed $750 million allocation, we encourage fare integration to be an eligible use of funds.

$100 million over two years for grants and technical assistance for cities to implement parking  management, with a focus on areas near transit, in order to support more housing, jobs and sustainable mobility

$0 for gas rebates. Relief funds should be prioritized for low-income Californians, regardless of whether they own a car.

Housing as a Climate Strategy

We are pleased to see the proposed budget’s section on housing state that “California’s housing and climate goals must be intertwined” and commit to encourage housing near jobs, schools and services in order to reduce carbon emissions from driving. The Newsom Administration is focused on dense, urban infill development as a key climate strategy and proposes to make $1 billion in targeted investments from the state’s General Fund over two years “primarily focused on accelerated development in downtown-oriented areas across California.” We support these expenditures and believe more should be done in the May budget revise to promote both sustainability and equity in housing and to counter displacement.

$5 billion over three years for the Multifamily Housing Program and the California Housing Accelerator Program to increase production of affordable housing in the right places.

$500 million over one year to launch the Bay Area Regional Black Housing Fund.

$200 million over one year for CalHOME to produce new deed-restricted owner-occupied homes for qualifying families to address racial and ethnic wealth gaps and overcome redlining.

SPUR supports the governor’s proposals on the following:

Food as a Climate Strategy

California school districts spend hundreds of millions of dollars purchasing food to serve students each year. By harnessing this purchasing power, school districts can drive demand for food produced in a way that supports the health and wellbeing of people, animals and the planet. Providing incentive funds would allow changes to purchasing that would decrease carbon emissions, water use and pesticide use.

$75 million over three years for the Department of Education to pilot a Good Food Purchasing Incentive Fund for school districts to buy food that supports a sustainable and just food system.