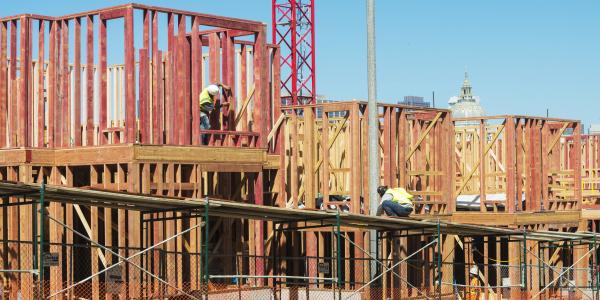 SPUR and its housing advocacy partners have a lot to celebrate this month: Governor Gavin Newsom has signed 31 housing-related bills in the last two weeks. Together they represent a significant effort to address California’s housing crisis.

Immediately after the recall election, Governor Newsom went back to work and signed into law four key housing bills that were top priorities for SPUR and for which we spent the year advocating. SB 8, SB 9 and SB 10 — which expedite housing approvals, end single-family-only zoning and create opportunities for small neighborhood multifamily developments — are central to the State Senate’s 2021 housing production legislative package Building Opportunities for All. SPUR worked in coalition with other pro-housing organizations to help move this legislation to the governor’s desk.

Governor Newsom also signed AB 1174 (Grayson), a bill co-sponsored by SPUR and the Bay Area Council, to strengthen and improve SB 35 (Wiener, 2017) for streamlined local housing approvals, including a clarification that, if a project is sued, the three-year timeline for construction to begin is paused until the litigation is resolved. The bill was amended to include an “urgency clause” to ensure that it would take effect immediately upon signing. This was particularly important because a major redevelopment project at the defunct Vallco Mall in Cupertino had been delayed due to litigation and was facing the statutory deadline of September 21 to proceed with construction. AB 1174, among other provisions, will now allow this project — which includes 2,402 housing units, half of which will be deed-restricted affordable — to proceed.

This week, Governor Newsom traveled to Oakland to sign 27 additional housing bills, several of which were key priorities for SPUR. The governor joined Mayor Libby Schaaf, Michael Johnson, president of UrbanCore Development, and a number of state legislators in a bill-signing ceremony at the Coliseum Connections apartments across from the Coliseum BART Station. Among the bills signed into law are:

AB 215 (Chiu) adds SB 330, the Housing Crisis Act of 2019, and other state statutes that promote housing production to the list of laws that, when violated, require the California Department of Housing and Community Development (HCD) to notify the jurisdiction and authorize the attorney general to bring an action to enforce state housing law.

AB 602 (Grayson) requires local jurisdictions to adopt a capital improvement plan as part of a nexus study for development impact fees and requires that fees be based on square footage. The bill also calls for HCD to develop an impact fee nexus study template by January 1, 2024, and requires local jurisdictions to post on their websites the total amount of fees and exactions for completed projects.

SB 290 (Skinner) allows student housing developments that reserve at least 20 percent of their units for lower-income students to access one incentive or concession under the state Density Bonus Law. It also requires jurisdictions to include in their annual progress report the number of units for lower-income students in such developments. The bill also expands the types of for-sale moderate-income housing units that can benefit from a density bonus.

SB 791 (Cortese) is part of the State Senate’s housing production legislative package and would, upon appropriation by the Legislature, establish the California Surplus Land Unit at HCD to facilitate the development of housing on local publicly held surplus land.

The Newsom Administration’s California Comeback Plan includes a historic an unprecedented $22 billion worth of investments in homelessness solutions and affordable housing, including $1.75 billion for the newly-launched California Housing Accelerator. This program will ensure that shovel-ready pipeline projects receive — on an expedited basis — the gap financing needed to move forward to construction without delay.

Some of the other major funding commitments include: