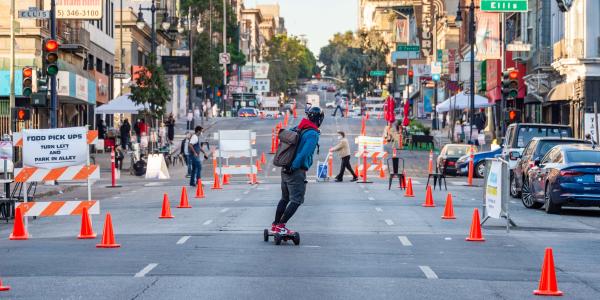 San Francisco’s notoriously complex public approvals process lends itself to abuse by residents who know how to wield local process requirements and state environmental laws against proposed changes and investments. Ironically, in 2006 a handful of individuals were able to use the California Environmental Quality Act (CEQA) to prevent San Francisco from passing and implementing its bicycle plan.

This year, to address some of these challenges, the state passed SB 288, a bill authored by State Senator Scott Wiener and co-sponsored by SPUR, the Bay Area Council and Silicon Valley Leadership Group. SB 288 creates targeted statutory exemptions to CEQA for sustainable transportation projects that make streets safer for walking and biking, speed up bus service on streets, make it possible to run bus services on highways, expand carpooling, and modernize and build new bus and light rail lines and stations. This is a huge win for all Californians, including those who walk, bike, carpool and use transit.

But even after SB 288 goes into effect in January, a single individual would still have the ability to challenge a city’s determination that these projects are exempt from CEQA, slowing or stopping projects as simple and straightforward as temporary street closures or bike lane striping. The legislation proposed by Supervisor Haney and Mayor Breed is intended to address some of the most egregious examples that San Francisco has seen.

If this proposed legislation passes, it would do two main things. First, appeals of projects that are not already subject to Board of Supervisors’ approval — such as certain Muni transportation projects, Muni transit service changes or Port of San Francisco maritime leases — could only proceed with 50 or more resident signatures or five or more supervisor signatures. This would make it more difficult for frivolous appeals by a few people to stop or delay important city improvements and investments.

Second, certain projects sponsored by the San Francisco Municipal Transportation Agency, the Airport, Port, Public Utilities Commission, San Francisco Public Works or the Recreation and Parks Department could move forward with implementation even while environmental appeals are being heard. These projects would include those that are for health and safety reasons, those that are temporary (that will be removed within 180 days) and those that are reversible (like bicycle lane striping or traffic bollards).

This legislation does not remove the ability to appeal a project, but the proposed changes provide common sense guardrails that raise the bar for making appeals and allow for some projects to proceed without delay while an appeal is being heard. SPUR supports this effort to make reasonable public projects — often with environmental aims — happen more quickly, and we will continue to seek out reforms that ensure environmental protection laws and democratic processes are preserved but not abused.