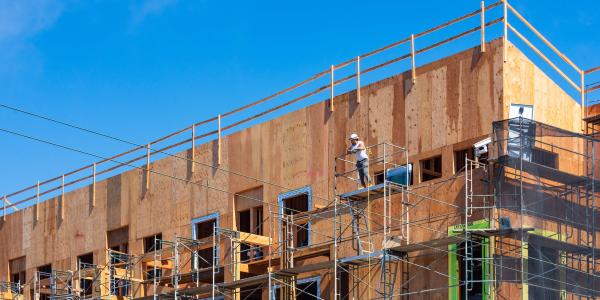 The Bay Area’s three largest cities made headlines recently when they passed bold new rules to phase out fossil fuels in buildings. San José, San Francisco and Oakland now have plans to make most new construction all-electric. These actions will make the air cleaner to breathe and slash the region’s contributions to climate change.

As the Bay Area’s smoke-filled skies made clear this fall, the time for stalling on climate change is past. The next 10 years are critical to put the globe on a path to avert the worst impacts of climate change. California has identified 2045 as the year the state must reach carbon neutrality by balancing emission and removal of greenhouse gasses. Three strategies will greatly reduce greenhouse gas emissions: using less energy, shifting almost all energy usage to electricity, and generating all electricity with renewable sources.

Buildings are a major source of emissions in the Bay Area, accounting for 31% of emissions in San José, 44% in San Francisco and 26% in Oakland. The vast majority of those emissions come from natural gas usage in buildings. Without electrifying buildings and generating that electricity from renewable sources, neither California nor the Bay Area will reach its climate goal of being carbon neutral by 2045.

Electrifying new construction is a least-regrets strategy to reduce emissions. All-electric new buildings generally cost less to build and operate over the lifetime of the building. Eliminating emissions from future buildings is one of the most straightforward strategies for cutting emissions overall.

Reducing reliance on natural gas appliances also makes the air healthier to breathe. Gas stoves and ovens in particular release large amounts of nitrogen dioxide in people’s homes, contributing to a host of health problems. A 2013 study showed that living in a home with gas cooking increased children’s chance of having asthma by 42%. The impacts of poor air quality are felt most heavily by low-income communities of color, who are already more likely to live in areas with poor outdoor air quality. Natural gas appliances contribute to outdoor air pollution as well. Home use of natural gas added about 14 tons of nitrogen oxides to the atmosphere in 2020. That’s a modest slice of total nitrogen oxide emissions in the Bay Area — about 6 percent — but by comparison, it’s twice as much as all passenger vehicles generate.

But electrifying new buildings is not sufficient. Over 70% of the Bay Area’s building stock was built before 1980, predating even some of California’s most basic energy efficiency buildings codes. In a recent study commissioned by the California Air Resources Board, all pathways to reach the state’s target of being carbon-neutral by 2045 relied on phasing out new natural-gas appliances between 2030 and 2040. That means that if the state is serious about fighting climate change, we will soon find only electric appliances at the store. Eventually the entire natural gas distribution system can be phased out.

Despite the clear imperative to electrify buildings, state agencies and lawmakers have been lagging on the issue. The California Air Resources Board, California Public Utilities Commission and California Energy Commission all have authority over aspects of natural gas usage in buildings. There has been some progress at these agencies, and the pace is picking up. In its 2019 update to building energy efficiency standards, the California Energy Commission added a compliance pathway for all-electric low-rise buildings. For the 2022 update, the commission is now evaluating how to electrify more buildings and may go as far as requiring new construction to be all electric. And through a combination of funding sources, there’s now $400 million available annually to incentivize building electrification. All in all, 2021 looks to be a turning point for state policy to electrify buildings.

To build the momentum on building electrification, cities and counties have stepped up with ambitious policies. As of December 9 2020, 40 local jurisdictions have taken action to reduce reliance on natural gas in buildings, and more than 50 other cities and counties are considering following suit.

The Bay Area has been a leader in this movement. This is due in part to the region’s commitment to act on climate. But Northern California has also been able to move quicker on building electrification because its energy provider, Pacific Gas and Electric, supports the phaseout of the natural gas system. The terrain is more difficult in Southern California, which is mainly served by separate electricity and gas providers. For utilities that exclusively provide natural gas, building electrification is a threat to their business model, and gas-only utilities such as Southern California Gas have proven to be hostile to the idea.

San Francisco, Oakland, San José, Berkeley and the Bay Area Air Quality Management District are five of the Bay Area jurisdictions that already have or are contemplating policies to promote all-electric new construction.

Berkeley led the way on electrification, passing the first ordinances in the country to require all-electric new construction. The new rules took effect for projects applying for permits or certificates as of January 1, 2020. The city is currently developing a pathway to electrify existing buildings and expects to have a draft ready for public comment in spring of 2021.

San Francisco has passed two ordinances to date on electrification. One ordinance requires all-electric new construction of residential and commercial buildings and will take effect June 1, 2021. The city allows builders to apply for waivers to allow natural gas for restaurants. An earlier ordinance requires all-electric energy sources when building new municipal buildings or undertaking major renovations. There isn’t a plan yet on the table to decarbonize the city’s existing building stock.

San José prohibited natural gas infrastructure in new detached accessory dwelling units, single-family homes and low-rise multi-family buildings as of January 1, 2020. The city recently expanded the ban with an ordinance to prohibit natural gas in new commercial construction after June 1, 2021. A major debate in San José is whether the city should allow new buildings to connect to the natural gas system for distributed power generation. Some commercial buildings generate their own electricity on site from natural gas using solid oxide fuel cells. Proponents argue that businesses need a backup power source during power outages, and that fuel cells are a better choice than diesel generators. SPUR opposes creating an exemption for businesses using gas-powered fuel cells. Connecting new buildings to gas continues expansion of the natural gas distribution system and creates more costly infrastructure that will either need to be maintained or abandoned as the region moves toward its climate goals.

Oakland City Council voted unanimously to support a ban on natural gas in new construction; the law will come back for final approval on December 15. The Oakland proposal is ambitious, allowing almost no exemptions and going into effect immediately. There is a process to receive a waiver if some aspect of electrification is infeasible, but the builder still has to comply with the requirements in all other respects as much as possible.

The Bay Area Air Quality Management District (BAAQMD) has asked staff to review its rules related to building decarbonization. The air district has authority to regulate pollution of indoor appliances that exhaust to the outdoor air, such as natural gas-burning appliances. Staff members are developing proposals for stronger performance standards for nitrogen oxide emissions from appliances. Clean air and climate advocates are strongly encouraging the district to put in place a zero-emission standard that would effectively require replacement of gas combustion appliances with electric alternatives.

Looking Forward to an All-Electric Future

As more and more buildings are constructed using all-electric technology, more municipalities, states and nations may begin to see that phasing out natural gas in buildings is practical and appealing. Forty years ago, people were skeptical that they could ever enjoy driving a car that got more than 20 miles to the gallon. Today, the average car gets more than 30 miles to the gallon, and electric vehicles are a growing share of the market.

Making the transition to buildings that rely entirely on electricity will require technical ingenuity, creative policies, a consistent dedication to equity and a deep political commitment to reducing greenhouse gas emissions — all of which the Bay Area has in abundance. Over the coming years, the region can fully decarbonize buildings, slash greenhouse gas emissions and air pollution, and serve as a model for the rest of the state and the world.