Equity and the Public Realm: Designing Spaces for Everyone

By Livesey Pack and Amanda Ryan 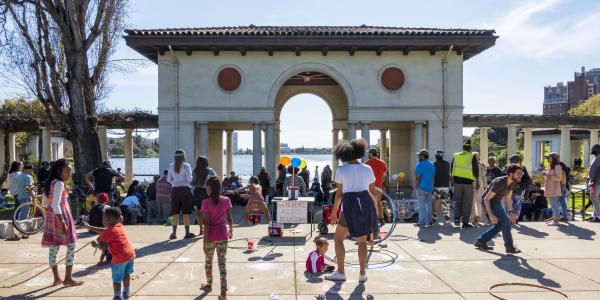 A photo by Sergio Ruiz.

The Black Lives Matter movement and the COVID-19 pandemic crisis have challenged the way we see and use public spaces. How are public spaces designed, and who are they designed for? Who determines how public spaces are used, and who gets to use them? SPUR’s weeklong symposium Ideas + Action 2020: Public Space brought people together from different cities and backgrounds to share their perspectives and visions regarding equitable public spaces — real and imagined, physical and virtual. Over the course of the week, a set of themes emerged: Building equitable public spaces requires a public and professional reckoning with power, safety and accessibility.

New York City’s Parks Without Borders initiative, in which park fences across the city were shortened or entirely removed, offers a telling example. As New York City Parks Commissioner Mitchell J. Silver explained in his opening keynote address, the public long assumed that fences made parks safer — but they didn't. Removing fences opened sightlines into these spaces, not only increasing safety for those both inside and outside the parks, but also creating a more seamless public realm and diminishing the insider/outsider binary. Here’s how the themes of power, safety and accessibility continued to develop throughout our week of discussions. You can watch all of these conversations on the SPUR website.

In our opening session, How We Use Urban Public Space, the panelists quickly identified power as the basis for exclusion. Liz Ogbu of Studio O observed that the dynamics of public space are dictated by “who has the power to determine what happens and who does not have the power and is left at the mercy of decisions that are being made by others.” How do we redistribute power in order to change these dynamics and create inclusive spaces? One solution is to create community engagement practices that amplify and validate the voices of those without power. In Who Are Streets Designed For?, Tamika Butler of Tamika L. Butler Consulting offered additional framing for genuine community engagement. “True engagement isn’t about empowering people,” she said. “It’s about realizing that people already have power and following that through to co-power.” In a truly inclusive public space, designing and decision-making is a collective process.

Power structures also establish a foundation for how one defines and perceives a sense of safety in public spaces. In light of the pandemic, public spaces have become safe spaces for communities to gather and nourish their physical and mental well-being. Even as local governments  foster this particular sense of safety through initiatives such as shared streets programs — and further reinforce physical safety with infrastructure, such as bike lanes and wider streets — these public realm investments fail to redress underlying systems of oppression. Entire communities of people have to think about what it means to be themselves in these shared spaces. In Who Are Streets Designed For?, Butler was forthright about this point, saying, “The green bike lane that was behind George Floyd as somebody was kneeling on his neck did not save him.” In sum, our current systems and practices do not value everyone’s safety equally, nor do they afford agency equally. In the same conversation, Shin-pei Tsay, director of policy, cities and transportation at Uber, made this connection, defining safety as a sense of security. “Do you feel that sense of being free to make choices?” she asked. “To take the path you choose, to be yourself in the way you choose to be?” Equitable public spaces allow individuals to live authentically and freely.

In What Does Public Space Look Like in a Post-Pandemic World? Daphne Lundi of BlackSpace presented a framework for actualizing safety by increasing accessibility. Lundi pointed to stewardship, community partnerships and thoughtful programming as means of enhancing accessibility.  Focusing on accessibility requires assessing the redistribution of power and supporting self-fulfillment in public spaces. In How We Use Urban Public Space, Chelina Odbert of Kounkuey Design Initiative pointed out that public spaces are most often designed by white, upwardly mobile, able-bodied men, so that “our streets, our parks and our sidewalks take that literal body as the neutral entity for which the public realm is designed.” Who designs a public space affects the space’s physical accessibility and uses. Then, who programs and builds the culture of a space has implications for a community’s sense of connection to and belonging in a space.

Public spaces such as parks, sidewalks and trails serve as essential connectors within cities and undergird the health of communities. But public spaces are not neutral. As Mimi Zeiger, editor of loud paper, argued in How We Use Urban Public Space, “the public realm can and should hold competing notions of use and engagement.” This vision for the public realm is still unrealized, in part due to issues of power, safety and accessibility. But the solution is within reach. Public spaces can meet competing ideas of safety and accessibility by distributing power across community members, designers and the broader public.