How Are San Francisco Schools Doing on Their Commitment to Better Food? 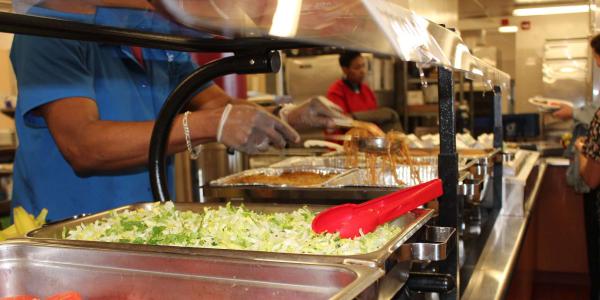 Lots of restaurants, private companies and public institutions say they source food ethically, provide healthy options and honor fair labor practices. But few can point to third-party verification certifying their claims. The San Francisco Unified School District (SFUSD) decided to hold itself to a higher standard when it adopted the Good Food Purchasing Policy (GFPP) in 2016.

The SFUSD policy called for an initial assessment of the district’s food purchases and the development of a plan to meet program benchmarks by fall 2017. While SFUSD did not release a report following the original timeline, the district has recently made significant progress. SFUSD Student Nutrition Services Director Jennifer LeBarre presented the district’s findings and next steps at a recent SPUR forum. Prior to joining SFUSD in June 2018, LeBarre implemented the GFPP at Oakland Unified School District, the third school district in the country to adopt the policy.

The GFPP outlines a set of standards for food purchasing and is based on five core values: local economies, health, valued workforce, environmental sustainability and animal welfare. The long-term vision is to influence food distributors to provide food that aligns with the policy’s core values by increasing market demand through large institutional budgets. To gain one star and a Good Food Provider seal, an institution must meet the GFPP minimum baseline in all five categories. The standards are metric-based and set up to encourage continual improvement, with higher standards phased in over time. Improvements are measured in comparison to an initial assessment.

Currently, SFUSD spends more than $7.6 million on food every year, and those purchases met the baseline standards for two of the five values: local economies and nutrition. The school district spends just over $1.5 million (20%) of its budget on purchases from family owned or cooperatively owned farms and processors within 250 miles, surpassing the baseline goal of 15%. As part of its continued commitment to local economies, LeBarre said the district plans to shift an additional $300,000 from medium to small size farms and food processors over the coming school year.

Similarly, SFUSD surpassed the baseline goal in nutrition. Alignment with the nutrition value is based on a 20-item checklist. Checklist items vary greatly, from offering free water at all meals to reducing purchases of red and processed meat. To meet the baseline, an institution must complete at least 51% of the items. SFUSD completed 86% of the items, placing them at the highest level of compliance.

LeBarre also talked about the challenges of meeting the other baselines. Currently, SFUSD purchases 73% of its food through a third-party vendor — Revolution Foods — because the district doesn’t have the kitchen space and the equipment to produce enough meals. Without more control over production, greater alignment with the standards is difficult. To overcome this challenge, the district’s long-term plan is to both build a central kitchen to provide meals for all district schools and refurbish individual school kitchens across the city by 2028.

In the interim, SFUSD is taking a number of steps to improve its alignment with the standards from two categories to four in the upcoming school year. To meet this goal, the district will purchase more antibiotic-free animal products, USDA organic products and “fair foods” as defined by third-party certifications including Fair for Life, Fairtrade and Food Justice Certified. By the end of the 2020–2021 school year, SFUSD will have spent more than $2.8 million, or 37% of its food budget, on food that meets or exceeds the baseline criteria for the GFPP.

The progress SFUSD is making could pave the way for other city agencies to follow suit. In 2018 the San Francisco Board of Supervisors adopted a resolution directing the city’s hospitals and jails to also complete a GFPP assessment. The Health Department and Sheriff’s Department recently completed their initial assessments and will soon be presenting action plans, timelines and goals to the Board of Supervisors. The detailed and ambitious goals that SFUSD has proposed provide a strong model for these other city agencies to emulate.

SPUR will continue to track the goals and progress of San Francisco’s schools, hospitals and jails as they work to improve their food procurement.

Read an executive summary of the SFUSD's progress >>

See the district’s presentation at SPUR >>