How Has San Francisco Done on Addressing Housing and Homelessness? 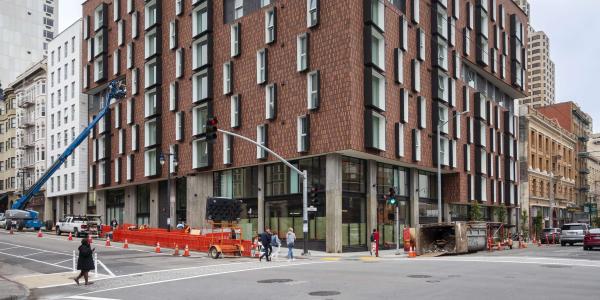 Now nearing completion, the Eddy and Taylor Apartments will provide affordable housing for low-income families, including some units for people exiting homelessness. Photo by Sergio Ruiz for SPUR.

In June 2018, following the unexpected and tragic passing of Mayor Ed Lee, San Francisco voters went to the polls to elect a new mayor. A few months later, in November 2018, term-limits, vacancies and an early retirement from the Board of Supervisors brought in a fresh new crop of supervisors, from the Sunset to the Bayview. Just before the 2018 mayoral election, SPUR released San Francisco's Next Mayor: A Blueprint for Change, a platform of specific policy goals and practical solutions for the years ahead. SPUR does not endorse candidates, mayoral or otherwise; we focus instead on policy ideas and on working with those in office to address the biggest challenges cities face. The intent of the Blueprint was to help set a policy agenda for the new mayor, whomever that might be.

One year later, we took a look back at the progress made toward those recommendations, specifically on housing and homelessness, two of the most critical issues in San Francisco right now. We’re pleased to report that some progress has been made. While it was never SPUR’s expectation that all of the recommendations in the Blueprint for Change could be enacted within a year, we hope this review will be a catalyst for further action and progress.

Perhaps the most critical crisis facing San Francisco is the crushing shortage of housing available to middle- and low-income residents. As the Blueprint made plain, housing affordability is a direct threat to the livelihood, diversity and sustainability of our city and region. To address this, SPUR recommended policies the new mayor could implement immediately to meet the city’s housing challenges and make it a more affordable place to live. Such policies, we wrote, “should advance the development of subsidized housing for lower income households and free up the market to develop homes without public subsidies.”

In the past year, San Francisco made modest to good progress on advancing many of the Blueprint’s key recommendations. Mayor London Breed and the Board of Supervisors clearly grasp the magnitude of San Francisco’s housing crisis and have taken specific, often bold, actions to address it. Most significant is the introduction of a $600 million affordable housing bond for the November 2019 ballot and more than $180 million in new funding for buying land and building permanently affordable housing. These are important steps in the right direction.

What follows is a status report for the housing recommendations proposed in the Blueprint:

Eliminate expensive city requirements.In May 2018, Interim Mayor Mark Farrell and the Mayor’s Office of Housing and Community Development convened several working groups to look at how the city might reduce the cost of developing affordable housing. While important conversations were begun among city departments, it is unclear what the final outcomes were. Meanwhile, as of February 2019, SF Planning and the Department of Building Inspection cleared a 919-unit backlog of accessory dwelling units awaiting approval. Nearly half were permitted, and the others were awaiting applicant responses. Most recently, Mayor Breed proposed getting rid of city department fees on 100% affordable housing and some accessory dwelling units. Legislation co-sponsored by Supervisors Brown and Mar passed unanimously in July, eliminating many city fees on 100% affordable housing and certain accessory dwelling units on a one-year pilot basis.

De-politicize the inclusionary housing program.The city’s inclusionary housing program requires developers of market-rate housing to build a certain percentage of affordable units. The required percentages, established in 2017, were based on political ideals, not on financial analysis to determine what is fiscally feasible to build. Unfortunately, no progress has been made toward rationalizing this process.

Initiate a new round of neighborhood plans.No progress has been made on this item, as no new plans have been put forth. The last of the previous round of plans, then Central SoMa Plan, was approved in December 2018. While lawsuits against the plan are pending, several major mixed-use projects that will begin to implement the plan were recently approved. Major amendments to the Market Octavia Plan (a.k.a. the Market Street Hub) are also underway, with projected adoption scheduled for winter 2020.

Add small-scale housing throughout the city.Beyond progress on accessory dwelling units, no serious proposals have been put forth locally to rezone the city’s single-family neighborhoods. However, Senator Scott Wiener’s bill to allow more housing statewide (SB 50) has raised the profile of this discussion in San Francisco, and housing advocates across the income spectrum are calling for a harder look at building more housing in San Francisco’s single-family neighborhoods.

Reduce the time it takes to review housing proposals.In December 2018, the mayor created the position of Director of Housing Delivery in the Mayor’s Office in order to speed up the permitting and production of approved housing projects, particularly affordable housing and the city’s megaprojects. Earlier this year, Mayor Breed also introduced a charter amendment for automatic approval of affordable housing and teacher housing, but the measure did not garner sufficient support at the Board of Supervisors to get on the November ballot. Both the mayor and a group of supervisors introduced ordinances to rezone public land for affordable housing and educator housing for the November 2019 ballot; in July a compromise was reached and only one of the proposed measures will be on the ballot. The compromise measure requires the Planning Department to meet certain timelines for its review of affordable and educator housing.

While some progress has been made over the last year, there is much more to do. San Francisco does not have adequate zoning capacity across the city to satisfy the existing housing demand, particularly in neighborhoods that already have the infrastructure to support additional density. We believe an important next step is for the city to fund a new round of neighborhood plans and undertake master environmental impact reviews for projects that fulfill the vision set forth in these new plans.

Breed made homelessness a cornerstone of both her campaign and her first term as mayor. Proposition C, which passed in November 2018, will potentially unlock hundreds of millions of additional funding to support city departments and service providers. New navigation centers have been proposed and opened, and new campaigns have emerged. There is growing momentum for San Francisco to not just meet the challenge of homelessness but to solve it. And yet, like many cities and counties across California, San Francisco reported significant increases in its homeless population in this year’s statewide count. In 2018, SPUR recommended a series of policy ideas to expand what was working well and scale up bold ideas. Here’s a look at the progress made on these proposals:

Scale up temporary shelters immediately. Many of SPUR’s recommendations focused on expanding existing programs and doubling down on what the city is already doing well. But we also proposed a significant shift from current practice: dramatically increasing the number of temporary shelters to respond at the scale of the emergency on the streets. Mayor Breed committed to 1,000 new shelter beds shortly after her inauguration and has made it a signature promise of her first term. The mayor and the Board of Supervisors also passed legislation declaring a “shelter crisis,” a designation that unlocks a state law exempting shelter construction from the traditional building permit process. It’s estimated that this change could shave nine months off of the timeline for building shelters. Thus far, just under 300 beds have been built and another 300 will be completed by the end of 2019.

Expand mental health services. SPUR recommended the new mayor expand the number of shelter beds for people experiencing mental illness to meet different categories of need. The city opened and subsequently expanded the SF Healing Center with 54-bed capacity for those with sub-acute needs. The mayor and the Board of Supervisors have also funded an expansion of the emergency psychiatric services ward at Zuckerberg San Francisco General, which will increase space by 30%. Mayor Breed’s budget for 2019–20 adds 200 behavioral health beds across the city, as well as increases to contracted staffing.

Enforce existing laws to end unsafe street behavior. SPUR urged the new mayor to show leadership around, and dedicate more funding to, the Healthy Streets Operation Center and promote strategies that address some of the most visible and unsafe behavior on the street. Mayor Breed committed an additional $600,000 in funding for the center in the 2019–20 budget. The city has also been studying the possibility of a safe injection site, but enabling legislation at the state level has been postponed to 2020. Similarly, the Department of Public Health has considered permanent housing that would allow chronic alcoholics to drink safely onsite (known as a “wet house”), but the idea hasn’t gained momentum in Mayor Breed’s first term.

Promote collaboration across city departments — and across the region. SPUR urged the new mayor to prioritize completing the city’s coordinated entry system, which matches people experiencing homelessness with the particular services they need. The Department of Homelessness and Supportive Housing completed this project in early 2019. The entry system serves as the “front door” of the city’s homelessness response, allowing departments, service providers and partners to share information and coordinate care. SPUR also recommended that the new mayor push legislative changes to support the Department of Homelessness and Supportive Housing — including shelter construction and staff. In addition to the shelter crisis legislation, the mayor and the Board of Supervisors passed legislation that allows the department to streamline its process for contracting with shelter service providers. Finally, San Francisco joined a recently created regional working group, made up of staff members from cities and county agencies, to help improve communications and data and facilitate coordination.

San Francisco has made progress. And yet, for every person who exits homelessness, three more enter it. The city has much more work to do to deploy prevention strategies, coordinate service, expand the programs that work and, ultimately, deliver the long-term solution: marshal the civic will and political courage to build more housing in more places.

San Francisco faces major challenges as it grapples with a housing shortage, income inequality, mental health crises on the streets and a growing population of people who have lost or are on the verge of losing their housing. In the year ahead, SPUR hopes that Mayor Breed and the Board of Supervisors will make further progress by de-politicizing the inclusionary housing program, initiating new neighborhood plans to allow taller buildings along transit corridors and increase density in traditional single-family home neighborhoods, and push additional efforts to cut approval times and reduce delays to new housing construction in San Francisco. We hope to see the promised increase in shelter beds, further expanded mental health services and homelessness prevention services, more housing for people experiencing homelessness and a better quality of life on San Francisco streets for everyone.

Last year’s Blueprint for Change offered a platform of specific policy goals and practical solutions for the city for the years ahead.While San Francisco has taken many of the key steps SPUR outlined, the city has a long way to go in order to achieve our shared objectives: making San Francisco a more affordable and safer place for all.

Read the Blueprint for Change >>