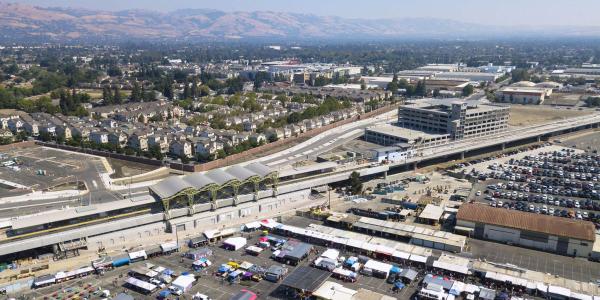 The new Berryessa BART Station, set to open in 2019, will be San Jose's first connection to BART and a major opportunity for transit-oriented development. Photo by Sergio Ruiz for SPUR.

The opening of San Jose’s first BART station marks an important moment for the city. After decades of commitment and vision, the Santa Clara Valley Transportation Authority (VTA) will bring BART to the Berryessa neighborhood, in the northeast part of San Jose, connecting the city to the regional rail system. Once the station opens, riders will be able to travel to San Francisco, for example, in just 60 minutes. This is a rare opportunity for expanded transit service, and the potential benefits extend far beyond the station itself. San Jose has a unique chance to create a dynamic urban village around its first BART station and set a strong precedent for future station area development.

To support transit ridership, new development needs to be of the type and intensity that will encourage a large number of people to walk from the station to the surrounding area, and vice versa. In 2014, SPUR published a white paper, The Future of the Berryessa BART Station, recommending strategic land uses, urban design standards and walkability priorities to make the station area successful. Since then, the need for housing in the Bay Area has become ever more acute, BART service has begun to South Fremont and the area around the future Milpitas BART station has seen considerable transit-oriented growth. Berryessa represents the next opportunity to add housing and increase transit use by creating a transit-oriented village.

Where We Are Today

Planning and construction for the Berryessa/North San Jose BART Station has progressed into its final stages. Adjacent to the San Jose Flea Market, the station is one of two in Phase 1 of the 16-mile BART to Silicon Valley extension. Construction and station buildout are complete, and VTA and BART are conducting service testing. The agencies anticipate starting passenger service at the Berryessa/North San Jose BART Station in early 2019.

According to the Metropolitan Transportation Commission, 60 percent of the 22,000 homes built in the Bay Area in 2015 were near and served by transit. In the South Bay, Milpitas is providing a model. Over 7,100 permitted residential units are included in the Milpitas Transit Area Specific Plan for the neighborhood surrounding the new BART station. With a planned mix of shops, high-density multifamily housing, affordable housing, parks, public spaces and a school, this area is poised to provide needed housing and move people out of their cars and onto transit. The same opportunity exists at Berryessa.

San Jose recently approved the Urban Village Implementation Framework, a citywide structure guiding financing and planning for urban village areas. With this tool in place, the city’s planners can start work on all phase one urban village plans that have yet to be completed, including the Berryessa BART Urban Village. The Berryessa urban village is made up of three large parcels: the San Jose Flea Market site, VTA property adjacent to the station and a property owned by Facchino Trucking. Owners of the San Jose Flea Market site have submitted development plans to the city. Meanwhile, community engagement for the Berryessa BART Urban Village plan kicked off in the spring with AARP’s Livable Cities Charrette, a week-long event bringing planners and community members together to imagine the future for Berryessa’s hallmark transit village. The city will continue developing the urban village plan for the station area through late 2018.

As the first BART station area to be developed in San Jose, the Berryessa BART Urban Village offers immense opportunities. The site also has challenges that require thoughtful planning intervention:

The surrounding land uses have historically been industrial or low-density residential. As a result, the current land uses do not support high transit ridership. Because industrial uses are an important part of San Jose’s economy, the city does not support rezoning surrounding industrial lands to more intensive uses that would bring more people to the area. This makes it all the more important to get the density and mix of uses inside the Berryessa BART Urban Village right in order to build a sufficient pool of riders and activate the village.

The existing low-density residential buildings in the area are not likely to provide a high number of transit riders, although the percentage of existing neighborhood residents who would take BART could potentially increase if pedestrian connections to the site and station are improved.

Market conditions in the area have not yet proven that they can support high-density residential development or a large commercial hub. While the market is favorable to townhomes and low-density apartments, such as the buildings added in the earliest phases at Berryessa, there is not yet demand for the type of development that is appropriate for a BART station area, i.e. taller, denser apartment buildings or a large commercial hub. However, these market conditions could change in the first five years of BART station operation; it’s critical to build in a way that can shape future demand at the site rather than building to satisfy current market conditions.

Parts of the site have already been built out with single-family and townhome development. The new residents of these homes may not be supportive of the higher density housing contemplated in the current zoning.

There is a 3- to 4-foot grade change between the station site and the flea market site, because the BART station site has been elevated to meet 100-year flood requirements. This makes it difficult to walk or bike between the two sites. Without adequate planning, potential riders on the San Jose Flea Market side of the development may lack easy access to the station.

1. Connect and design the three sites as one unified place.

Because the Berryessa BART Urban Village is made up of three large parcels, extra attention must be paid to the connections between each development project. By coordinating setbacks and streetscape elements, the urban village can build a public realm that is easy, intuitive and enjoyable to access on foot. Key local characteristics — including the micro-shopping culture of the San Jose Flea Market, a long-time tradition on the site — can be incorporated throughout the new development and station as well, in order to cultivate a distinct, unifying identity for the new neighborhood.

2. Plan for a large number of jobs.

Transit and jobs have a mutually supportive relationship. Areas that are transit-rich are more attractive to employers, and transit that is located in jobs-rich areas draws more riders. For example, a recent study found that two-thirds of all BART trips start or end at just four stations on Market Street in San Francisco — all of which are surrounded by a high concentration of jobs. Several studies have shown that people aren’t willing to walk very far from their office to transit (or vice versa), so putting jobs near the BART station is essential for capturing potential riders. Although it’s not a downtown station, the Berryessa/North San Jose BART Station and surrounding area has the potential to grow as a high-density transit village and commercial hub, presenting a significant opportunity for San Jose to position itself as an employment destination for residents of the East Bay, as well as for San Jose residents to access jobs and activities throughout the BART network.

3. Use phasing to ensure the village is built out at sufficient residential and commercial density.

While the market may not currently signal support for high-density housing or a large commercial hub, these market conditions would likely change when BART service begins. We recommend phasing both residential and commercial development, particularly on the flea market site, to ensure that the development is built out at a sufficient density given its proximity to transit , with high density housing and a large amount of commercial space near the station. Phasing can also help ensure that land uses are mixed throughout the urban village rather than concentrating all affordable housing and commercial developments in defined, separated areas on the site.

4. Use the urban village plan to apply urban design standards and guidelines to new development.

Vibrant urban communities don’t emerge automatically. Cities have to set ground rules for urban design in growth areas through the municipal code and other standards in order for new development to have the greatest positive impact on the city. San Jose has made strong progress in establishing urban design expectations in its urban village planning. For example, the Santana Row/Valley Fair Urban Village Plan uses these tools to shape the quality of new development. We recommend using a two-tiered approach of both minimum enforceable standards and more aspirational (and optional) guidelines in the Berryessa urban village plan. With much of the area around the Berryessa BART station being designed for the first time, the city also has an opportunity to shape growth around the pedestrian and transit-rider experience. As SPUR saw first hand on our summer 2017 study trip to European rail stations, world-class stations and the areas that surround them are first and foremost public gathering spaces that prioritize people who arrive by foot, bike and transit. Key strategies include making walking attractive by eliminating blank walls and designing active ground floors, constructing a pedestrian network with dense, fine-grained circulation and crossings on large blocks, and avoiding high-flow auto routes that lead to unsafe, busy driving streets.

The Berryessa/North San Jose BART Station is currently planned as a park-and-ride station. Some of the parking for the new station is provided in a structured parking garage, while the remainder will be provided through surface parking that could be converted to different uses in the future. Converting surface parking to housing or other active uses would make the station function better as an urban place down the road. Alternatively, the parking planned on VTA-owned land could be used to decrease parking elsewhere on the site through shared parking strategies.

As the City of San Jose plans for the station area around the Berryessa/North San Jose BART Station, it has a unique chance to lay the foundation for a dynamic transit village and set a strong precedent for future San Jose station area development. Current plans already call for some higher density housing closest to the station, and good progress has been made on developing the trail connections to the BART station. The planned Upper Penitencia Creek trail connector and Coyote Creek trail extension on the west side of the village create promising links to the South Bay’s network of trails. SPUR looks to build on these ideas to get both short-term and long-term gains in order to address existing challenges and maximize opportunities at San Jose’s first BART urban village.