Oakland Needs More — Here’s How to Get It 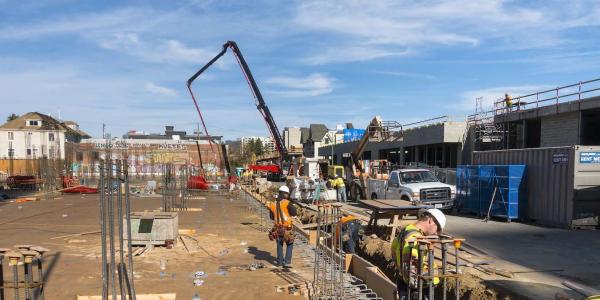 A seven-story building with 265 units of housing and 18,000 square feet of retail space going up in Oakland's uptown neighborhood. The mixed-use development will replace two former parking lots in the block bounded by Valdez, Webster, 23rd and 24th. Photo by Sergio Ruiz for SPUR.

At a recent neighborhood design session for the Downtown Oakland Specific Plan, an Uptown Oakland resident at the same breakout table as me was asked what she thought her neighborhood needed out of the plan. “More, more of everything,” was her answer. More housing, more places to shop, more parks, more and better transit, more people and on and on. I couldn’t have agreed more.

That need for more, and the inability to deliver it, has been a defining characteristic of the last few decades in Oakland, especially when comparing the city to its rich neighbor across the Bay. Oakland is now in a moment when that can change — but it will require some deliberate and farsighted action. The outcome is by no means guaranteed, but it can happen. This is how.

In October 2017, Oakland adopted a $2.78 billion 2017-2019 budget. Slightly under $1.2 billion of that is in the General Fund. The rest is earmarked for a range of things like pensions, facilities maintenance, debt service, equipment and voter approved initiatives like Measure Z, to fund police, fire and violence prevention services, and Measure KK, for infrastructure maintenance. Added to these expenditures are the annual $579 million that Alameda County is spending in Oakland, which brings the annual public sector budget in Oakland to about $1.85 billion. (Separate agencies spending money in Oakland are the East Bay Municipal Utility District, BART, AC Transit, Peralta Colleges, the East Bay Regional Parks District and the Oakland Unified School District.) This means that about $4,404 is spent for every resident in Oakland. But this pales in comparison to the $9.7 billion budget of San Francisco, which is a combined city and county with a per-resident expenditure of over $11,000.

San Francisco is an outlier compared to most other American cities, but in this expensive region its budget allows for basics that Oakland’s does not, or does only sparingly — things like maintaining parks, building affordable housing, repairing streets, strengthening sewer and water infrastructure to make them earthquake proof, maintaining street trees, providing services for the homeless, keeping libraries open longer and the list goes on. When faced by a lack of city resources for a particular issue, the voters of Oakland have proven to be extremely generous and have voted time and again to tax themselves to pay for a wide range of things. According to the parcel tax bill for SPUR’s office in Oakland, those add-ons include the following: two funding measures for a mosquito abatement district, two funding measures for a vector control district, special assessments for paramedic services and emergency medical services, Peralta Community College Measure B, Oakland Unified School District Measures N, G & G1, a special violence prevention tax, funding for the Downtown Oakland Business Improvement District, AC Transit Measure VV, funding for a city landscaping and lighting assessment district and for libraries, and a few more.  In all there are 20 separate assessments added onto the property tax bill, which together increase the bill by 35 percent. In comparison, the property tax bill for SPUR’s office in San Francisco has only 5 added assessments.

Even though Oaklanders are willing to tax themselves like this, it isn’t proving to be enough to provide the level of services that the city needs, and here the comparison to San Francisco is illustrative. Rather than voting extra assessments on properties, San Francisco has grown its job base, its population and its tax revenue base. Which brings me back to the comment made at the neighborhood design session.

Oakland does indeed need more, and SPUR believes that the best way for that to happen is for Oakland to grow. One of the big ideas in our report A Downtown for Everyone was that downtown Oakland should add 25,000 new residents. With 6,675 residential housing units under construction right now, the vast majority of them downtown, and many more in the planning and approval pipeline, we might have been too conservative. In our report we noted that downtown Oakland contained 40 acres of vacant land and surface parking lots, totaling 188 vacant developable sites, and that they represented a significant opportunity for growth. While many of those lots are now being developed, most still are not. Added to these sites, but not mentioned in our report, are the great number of vacant properties throughout the city. While a number of these are now being renovated and occupied, many vacancies remain — leading us to believe that there is much, much more room to grow.

In a blog post last year, we looked at the benefits to the city’s bottom line from such growth, considering the case of 1314 Franklin Street. Now under construction, this 634-unit residential building with 17,000 square feet of retail will replace a three-story parking garage and will bring $3.4 million per year in annual tax revenues (up from $260,000 per year for the parking garage).

Those increased tax revenues are annual payments, and that is from one building. In the long run, growing the tax base in this manner, and bringing more people and more businesses to grow the city’s tax and revenue base, is the best way for Oakland to get more.

Of course there is much more to Oakland than just downtown. Oakland’s main commercial arteries, like International Boulevard, MacArthur Boulevard and San Pablo Avenue, have much more room to grow than downtown does. For example, a 2016 survey found 1.5 million square feet of empty lots and vacant storefronts in the 107 blocks of International Boulevard from Lake Merritt to the San Leandro border.

As campaigns begin collecting signatures for November ballot measures, many of which will ask Oaklanders to add to their property taxes for a series of worthy causes, it is important to remember that there is another route forward, one in which Oakland grows so that it’s tax rolls grow, so that one day it can afford to pave roads more frequently, fund its looming pension obligations, open libraries longer, hire more police officers, maintain parks better, hire more swimming instructors and provide all of the benefits that the entire Oakland community desperately needs. These are improvements that will help all of Oakland and, one day, Oakland needs to be able to afford them.