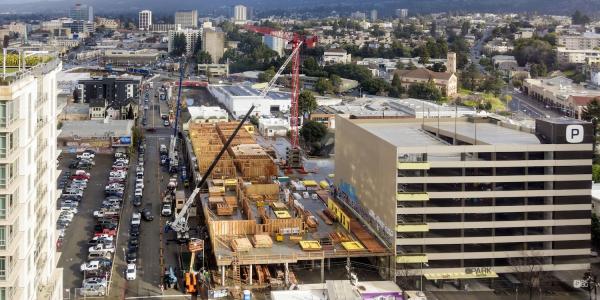 If you’ve walked around downtown Oakland recently and read about downtown in the media, you’d be excused if you’ve gotten mixed signals about what’s going on there. At last, construction is visibly underway downtown. I’m not talking just about renovation of old buildings, but honest-to-god new construction. Big holes are being dug. Dump trucks are hauling away dirt. Cement trucks are lining up to pour foundations. Over 3,500 housing units are under construction, and there are cranes in the air.

To the casual observer, it looks like the development boom has finally begun and those who were worried Oakland was going to miss yet another development cycle were wrong. Just last week, however, came the sobering news that Uber isn't going move 3,000 employees to the old Sears Building at 20th and Broadway after all. Instead the company is only going to bring 200 or so and will expand in San Francisco instead. This is not good news — especially for those of us who have looked forward to the vitality that all of those people would have injected into street life and commerce on Broadway. Don’t get me wrong, Broadway is much more alive than it was 20 years ago, but there are still far too many empty storefronts. When Uber was planning to move in next year, it seemed like we wouldn’t have long to wait. But now? Uber will lease the space to other tenants, but how long will it take to fill? Without thousands of people working in the building right away, will the planned market hall on the ground floor of the building be viable? Will the just-announced plans for many residential buildings in the immediate neighborhood be shelved?

In our 2015 report A Downtown for Everyone, SPUR advocated that the City of Oakland should try to attract lots of new development downtown, and that the rules governing new construction should take into consideration the needs of the community as well as the financial realities of development. We recommended that Oakland institute an impact fee, for example, but set it at a financially feasible level. In 2016 the Oakland City Council adopted impact fees that start small and increase over a three-year period, with the highest fee rising to $28,000 in 2020 for a single-family home. These one-time payments that developers make to the city can go to things like child care or affordable housing. Getting the level of the fee right is crucial: Set it too low, and cities lose out on an opportunity to invest in the public good. But set it too high, and projects become impossible to finance.

Whether or not the impact fees were set at a financially feasible level is still a point of contention, and time will answer that. But many people feel that the fees are too low and, in response, various groups are negotiating ad hoc community benefits agreements on top of the city’s impact fees. In Chinatown, Wood Partners has agreed to pay an extra $1.8 million on its 262-unit project on 13th Street, and at MacArthur BART, McGrath Partners and Boston Properties agreed to an $800,000 community benefits package for their 402-unit building, made up of:

It may feel like a big win when activists are able to extract additional concessions from individual developments, but in the long run, project-by-project community benefit negotiations can be counterproductive. Proposed developments are more likely to actually get built when community benefit payments are known in advance and can be factored into project costs. When concessions are not known and are subject to ongoing negotiation, it increases the risk that the proposed project will not “pencil out” and the developer will walk away. For Oakland's sake, it’s a good idea to avoid this scenario. In the long run, Oakland will get much more benefit if fees and exactions are predictable. Moreover, the real money for Oakland lies in the increased property tax payments that come as a result of new development and not in one-time fees and exactions. For as impressive as some of these figures may seem, they pale in comparison to the long-term benefits new development brings to the broader Oakland community.

Just how great the gulf is between the short-term and long-term benefit is illustrated by calculations the Hausrath Economic Group has done on 1314 Franklin Street, a planned 634-unit residential building with 17,000 square feet of retail that will replace a parking garage downtown:

Compare $3.4 million a year, every year, to the one-time payments of $800,000 or $1.8 million mentioned above and it’s clear that, in a cash-starved city like Oakland, the greatest and longest-term benefit the community can realize is to attract new private sector development that will increase the tax rolls. In the long run, the benefits to the city and its residents from an increased property and sales tax base will be far greater than any impact fee or community benefit check that can be collected upfront. As Uber scales back its plans in Uptown, we should keep this in mind.

It is by increasing the tax rolls that Oakland will one day be able to pave roads more frequently, fund its looming pension obligations, open libraries longer, hire more police officers, maintain parks better, hire more swimming instructors and provide all of the benefits that the entire Oakland community desperately needs. These are improvements that will help all of Oakland — not just one neighborhood or one nonprofit group.

Maybe all of the planned developments will come to pass — lots of people are very confident that they will. But as Oakland restarts its Downtown Specific Plan process, is it important to not assume planned developments are going to happen until they do. Furthermore, it is even more important to not pin financial hopes for community benefits on one-off, ad hoc negotiations with developers of individual projects — especially if those agreements might make the project less likely to happen. Adhocracy might seem expedient in the short term, but it can be ruinous in the long term. Oakland can’t afford that.