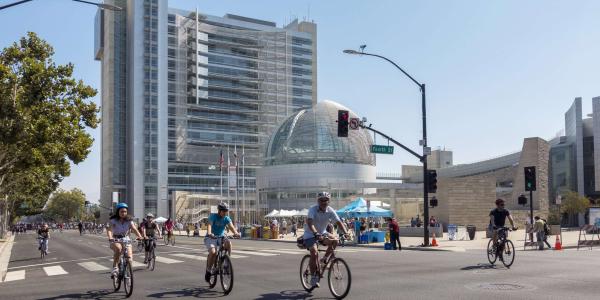 California has set an ambitious goal to reduce greenhouse gas emissions 80 percent below 1990 levels by 2050. In its proposed new Environmental Sustainability Plan (ESP), the City of San Jose will go one step further with a “2°C pathway”: a strategy to reduce greenhouse gas emissions in compliance with the 2016 Paris Accords’ commitment to keep global temperature below a two-degree increase (from 1990 levels). In becoming the first American city to develop a “Paris compliant” pathway, San Jose aims to lead the way among cities in reducing climate impacts.

In 2016, the San Jose City Council asked its Environmental Services Department to update the city’s 10-year-old Green Vision with a new plan focusing on energy use, water consumption and mobility, tying it to the city’s general plan. A grant from PG&E to produce energy savings funded the creation of the plan itself and will fund its first two years of implementation, including hiring a chief sustainability officer for San Jose. The new plan is expected to be adopted in January 2018. 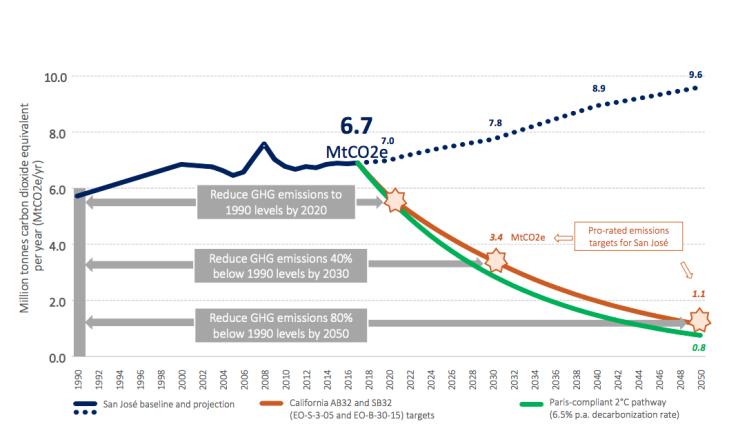 San Jose’s new Environmental Sustainability Plan calls for greenhouse gas reductions beyond what the State of California has mandated — to just 0.8 million metric tons of carbon dioxide equivalent emissions per year by 2050, down from 6.7 today. Chart courtesy of San Jose Environmental Services Department.

1. The plan builds on the Envision San Jose 2040 General Plan to make a low carbon footprint “business as usual.”

The new plan integrates 73 percent of existing measures of the Envision 2040 General Plan and reinforces many of its core urbanist goals, particularly in the areas of land use and transportation. These include developing integrated, accessible public transport infrastructure and increasing walkability of neighborhoods.

It also builds on the city’s economic strategy, which calls for clustering jobs and new housing in existing transit corridors. Growing strategically in transit-rich areas capitalizes on the coming arrival of high-speed rail and BART service in San Jose and produces a win-win for the economy and the planet.

The ESP also acknowledges expected updates to the California building code — for residential buildings in 2020 and commercial buildings in 2030 — that will require new construction to be energy neutral. Incorporating more solar power and other alternative energy sources will make new homes more efficient and more affordable.

2. It emphasizes reduction of fossil fuel use though the San Jose Clean Energy program and the electrification of vehicles, equipment and appliances.

When it launches in spring 2018, San Jose Clean Energy (SJCE) will offer the city’s residents and businesses electricity options that are a higher percentage renewable, and at competitive prices. Adopting SJCE will make San Jose the largest single jurisdiction in California to operate a Community Choice Energy program. Accelerating the rate of adoption of renewable energy sources through programs like SJCE moves San Jose and California closer to a 100 percent stable, reliable and cost-effective renewable energy grid — and enables switching the energy sources of vehicles, equipment and appliances from fossil fuels to renewables. Converting energy uses from natural gas and gasoline to electricity was one of three key strategies in SPUR’s 2016 report Fossil-Free Bay Area.

3. The plan seeks to draw people in by improving affordability and making people’s lives better.

Responding to feedback from San Jose residents that policies reducing our carbon footprint often feel like sacrifices, the speakers emphasized the benefits of adopting more sustainable habits. In retrofitting buildings to be energy neutral, waste reduction and cost reduction work together: Energy-efficient homes are more affordable homes. And steps like trading in a high-maintenance lawn for landscaping with native plants helps to reduce both household costs and per capita residential water consumption.

The benefits are particularly apparent with the ESP’s focus on creating more local jobs and reducing the amount of time spent commuting. The ESP calls for reducing the number of commute trips made by single-occupancy vehicles to 4 out of 10 by 2030 and moving more people up the curve of adopting electric vehicles, emphasizing autonomous, shared and inclusive mobility options.

The city is also aiming to greatly reduce traffic volume by densifying existing neighborhoods and setting an ambitious goal of creating an additional 10 million square feet of commercial workspace within half a mile of transit by 2030. It seeks to make public transit not just an option but the preferred method of getting around. More efficient mobility alternatives like transit and cycling will also contribute to reducing greenhouse gas emissions.

4. It monitors and will integrate technological advances when they happen.

The ESP calls for first adopting carbon-reducing measures that deliver economic cost savings, such as densification and local jobs, and focusing later on elements that carry significant costs now but may become less expensive as technologies become more widely adopted. One high-cost aspect of the plan is SJCE, which may become less expensive over time as future improvements to renewable energy sources become available.

Most significant is the transition to electric vehicles. According to the panelists, transitioning from traditional internal combustion engines to electric vehicles yields the greatest potential emissions reduction, as the gasoline and diesel used for transportation make up 57 percent of San Jose’s city-wide carbon footprint. Switching VTA buses, delivery trucks and other transportation fleets to renewable energy sources through electrification can have significant impact later on, particularly if more widespread adoption continues the trend of lowering their cost.

Opportunities to Do More

There are a couple of key ideas related to sustainability that don’t appear to be emphasized in the ESP but could complement and extend the benefits of the plan. First, the plan could identify critical open spaces for protection, carbon sequestration or flood mitigation activities. Open space protection is addressed in the general plan, and going forward the ESP and general plan will be reviewed concurrently every three years, so this presents an opportunity for better alignment. Second, the city could be more aggressive with requiring energy retrofits in existing commercial and residential housing stock while supporting the innovation economy, for example by experimenting with outcome-based energy codes, as San Francisco is doing. Finally, the city should eventually address resilience to heat, drought, flooding and other climate-related events through this process or a subsequent planning effort. Increasingly, policies to address climate adaptation are being incorporated into general plans and climate action plans. For example, the City of Berkeley Climate Action Plan contains strategies and targets for tree-planting, water reuse and coastal flood protection.

Overall, however, San Jose’s plan is a bold step forward, positioning the city as a leader in building a sustainable future for the Bay Area and setting a new standard for low-carbon growth.