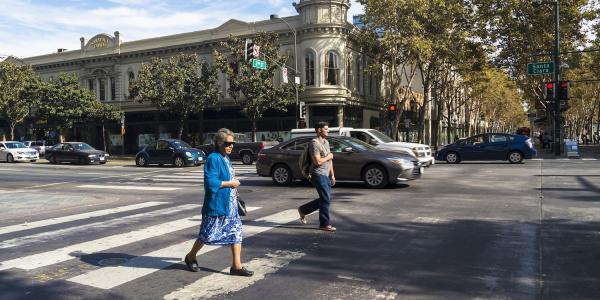 Senate Bill 1, the state transportation funding bill passed by the Legislature this month, represents a monumental win for California and the Bay Area. Not only does it solve big problems for cities and transit agencies across the state, it shows that California can raise significant funding for transportation in an era of dwindling federal resources.

Why Is SB 1 So Historic?

For starters, it raises an enormous amount of revenue — over $5 billion per year in perpetuity, equivalent to a 45 percent increase over current state funding levels. For years, transportation advocates and local elected officials pounded the message that funding shortfalls accumulating over the last several decades have resulted in a $59 billion backlog of state highway repairs and a $75 billion backlog for local streets and roads. Press events featured pictures of giant potholes and stories of car repair bills exceeding $700 a year. The message was heard, and the Legislature went big.

SB 1 has been called a “road bill,” but the short hand is somewhat misleading. Yes, the vast majority of the funds are devoted to roadways, but the focus is very much on roadway maintenance rather than roadway expansion. The single program focused on traffic congestion (a new $250-million-per-year competitive program) receives only about 5 percent of the funds annually and actually excludes highway widening projects other than express lanes and high-occupancy vehicle lanes.

By contrast, public transit receives more than 10 percent of the annual funds, with a significant share of the funding distributed via formula, providing transit operators statewide with increased predictable funding. In addition to this regular funding for operators, the bill dedicates $245 million per year to the Transit Intercity Rail Capital Program, which funds upgrades and expansions for statewide rail projects. The bill also includes a new commuter rail program that will help support Caltrain, SMART and ACE services. Finally, bicycle and pedestrian projects are expressly called out as eligible for funding from the new infusion of road repair money, providing an enormous opportunity to make our streets more friendly for biking and walking. In the Bay Area alone, the bill is expected to provide about $230 million more per year in increased road repair funding to cities and counties.

This brings up another reason SB 1 matters: In recent years, road repair bills have been a significant drain on city budgets and local transportation revenue measures, such as Santa Clara County’s Measure B and Alameda County’s Measure BB. Before Oakland passed its 2016 infrastructure bond, Measure KK, the city had a $443 million paving backlog; on average, streets were getting paved once every 85 years. In cities across the state, a regular funding stream for road maintenance will mean that new local and regional funding measures can focus on building a world-class regional transportation system that provides mobility for a growing population, not just shoring up the one we have.

Most importantly and surprisingly, SB 1 reaffirmed the state’s commitment to funding transportation with transportation-related user fees, namely fuel taxes and motor vehicle fees. While the state’s transportation coffers have received new funding over the last two decades from a number of different sources, you have to go back to 1981 to find the last time legislators voted to raise the gas tax. More recent funding has come from the state’s cap-and-trade program and a $20 billion general obligation bond (Proposition 1B, 2006) — neither of which imposed new taxes on voters.

One of the most remarkable aspects of SB 1 is that its funding sources are indexed to the Consumer Price Index, so they don’t lose value each year. The only new tax or fee in SB 1 that isn’t indexed is an increase in the sales tax on diesel fuel, which will rise and fall along with the price and consumption of diesel.

Overview of Revenue Increases in SB 1

A Good Bill, But It Can’t Solve Everything

Support for SB1 was not unanimous among sustainable transportation advocates. Even some of the groups who succeeded in shaping it into an environmentally friendly bill opposed it in the end due to the last-minute addition of a provision sought by the California Trucking Association related to anti-pollution requirements for trucks.

Looking forward, of course no single piece of legislation can solve all of our transportation funding challenges in the Bay Area. We still face an enormous backlog of transit expansion projects to serve our growing cities, such as extending Caltrain to downtown San Francisco’s Transbay Transit Center. Of the $300 billion slated to be spent on transportation in the Bay Area in the next 20 years, SB 1 won’t change the fact that less than 10 percent ($29 billion), will be used to expand our transportation system.

What SB1 shows us is a path for how to get something big done for transportation statewide. It required years of compromise, dialogue between hundreds of different interests, strong focus on spending priorities and the best revenue sources, and thinking at a scale that actually solves problems. SB 1 moved the conversation forward on a more sustainable transportation future for Californians, in all senses of the term. We need this pathway. In these times of federal funding uncertainty, we must figure out how to pay for our local and regional transit expansion projects and a statewide rail network — as well as the crucial shift to clean transportation. We also can’t lose sight of the fact that over the next decade we must start thinking about how we transition away from one of SB 1’s funding sources: the gas tax. As we make the much-needed shift to electric vehicles, we will need an ongoing, sustainable revenue source that isn’t reliant on fuel consumption. California’s Road Usage Pilot Program, which will conclude later this year, will lay important groundwork for that “next generation” conversation.