How Is Oakland Doing on Its Affordable Housing Goals? 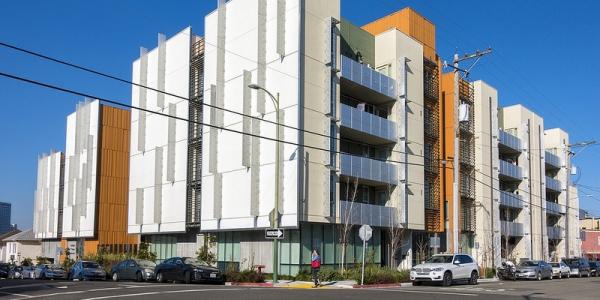 The Lakeside Senior Apartments, an affordable housing project in Oakland. Photo by Sergio Ruiz for SPUR.

The rate of increase in rents and home sale prices may have slowed, but Oakland still has the fourth highest rents in the nation, and housing remains unaffordable to too many. In 2016, the city set high goals for addressing the housing shortage — but how much progress has been made since then?

To date, 5,985 affordable units have been acquired and/or rehabilitated or are undergoing that process, and 2,171 new affordable units are under construction or moving through the approvals process. Furthermore, a total of 3,500 units at all price points are currently under construction. This is a huge number for Oakland, the most units under production at any one time for longer than most people can remember, and a gigantic step in the right direction.

In July 2016, the Oakland City Council amended the city’s Rent Adjustment Ordinance, and in November 2016 Oakland voters approved Measure JJ to strengthen renter protections. Together these actions did three important things. First, they extended just-cause eviction requirements, which mandate that tenants can only be evicted by their landlord for one of 11 just causes, to units built and approved before December 31, 1995. (Previous protections only covered units built in 1980 and earlier.) Second, they required landlords to file a petition for rent increases over the consumer price index (although increases allowed but not taken in the past can be carried forward). Third, they doubled the city’s per unit registration fees in order to fund better services for helping renters know and understand their rights. Since then, the city has engaged a group of local nonprofit advocacy organizations to provide tenant counseling and legal assistance to renters, embarked on a revamp of the Housing Assistance Center, and created new, more user-friendly websites for the Department of Housing and Community Development and the Rent Adjustment Program.

In November 2016, voters also approved the Oakland Infrastructure Bond, a $600 million infrastructure bond. Though the majority of the money will be used for street repair, city facility operations and maintenance, $100 million will be used to acquire existing affordable housing, thus taking it off of the speculative market, and rehabilitate it. With these new resources, and with support from an angel donor at the San Francisco Foundation, a trio of local organizations have begun acquiring and rehabilitating housing throughout Oakland.

In 2016, the Oakland City Council and Oakland voters showed just as much resolve to give the city the means to build new affordable housing as they did to enhance efforts to preserve it. In April, the City Council adopted impact fees on market-rate residential development to help pay for the construction of more affordable housing in Oakland. And in November, Alameda County voters approved the $580 million Measure A1 to help fund affordable housing construction. Also in 2016, the City of Oakland received $60 million in state cap-and-trade funds through California’s Affordable Housing and Sustainable Communities Program for building new transit-oriented affordable housing projects and improving transit, bike and pedestrian infrastructure. Projects funded by this grant include the rehabilitation of two historic single-room occupancy hotels, the Empyrean and the Harrison, the construction of two mixed-income multifamily apartment buildings, 140 units of which will be affordable, and the construction of new bus, bike and pedestrian connections to downtown, uptown and East Oakland.

There is still a lot to do to resolve Oakland’s affordable housing shortage, and SPUR will continue to assist the city in this task. Among the looming priorities is to create new policy for developing land owned by the city. Instead of making piecemeal decisions about individual city-owned properties — a process that can leave projects open to controversy — Oakland needs a comprehensive, citywide plan for public lands. Such a plan could guide decision-making on how best to use public lands to achieve the city’s affordable housing goals — as well as its many other competing goals and pressing needs.