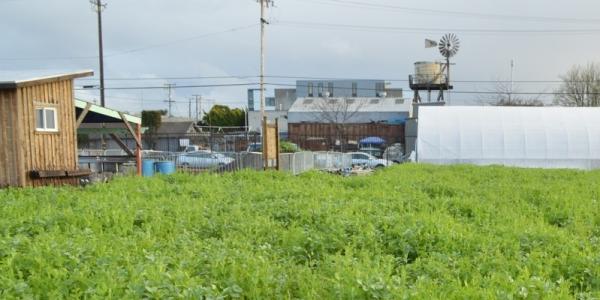 Update: In fall 2017, the state legislature passed and the governor signed an extension for the urban agriculture incentive zone program through 2029.
Read the final version of the legislation >>

The Urban Agriculture Incentive Zones Act will turn four years old this fall, and the California Legislature is now considering extending its statutory life. Conceived in 2013, the act — also known as AB 551 — allows cities and counties to provide landowners with a property tax deduction in exchange for committing their land to urban agricultural use for at least five years. When it was passed, the bill included a sunset provision that would stop any new property tax reduction under the program in 2019, unless the legislature voted to extend it. This session, the legislature is considering a 10-year extension to allow the existing programs more time to develop and give other jurisdictions more time to start incentive programs.

SPUR was a strong supporter of the original legislation and supports its extension as well, as the program provides a way for some urban agriculture projects to have another avenue to access land and secure land tenure.

Since its passage, San Francisco, Sacramento, San Jose and Santa Clara County opted into the program and passed local laws establishing urban agriculture incentive zones. San Diego, Los Angeles, Long Beach, Oceanside and Chula Vista are currently in the process of establishing their own zones or considering doing so.

The impact of the legislation has been more modest than anticipated. SPUR contacted all the jurisdictions that had urban ag incentive zones earlier this year and found four parcels across three cities that were currently under contract. For the city gardens and farms on those sites — including the 18th and Rhode Island Garden in San Francisco and Valley Verde in San Jose — the incentive is providing either access to land or a greater sense of land security than the gardens otherwise might have. For cities and counties, the loss in property tax revenue has been minimal — in all but one case less than $7,000 per year. The fact that only a few property owners and projects have taken advantage of the incentive, and that jurisdictions continue moving forward on implementation, supports the idea of giving the program more time to see how the programs develop.

The extension bill —AB 465 — has already passed the Assembly Local Government and Agriculture committees with unanimous support. It now moves to more committees in the legislature and, if successful, to the governor’s desk in the fall. Given the low cost of establishing urban agriculture incentive zones and the continued interest from advocates and cities, extending the program through 2029 makes sense and SPUR is hopeful that it will pass.

Read the text of the extension legislation (AB 465) >>