Spare the Air, Cool the Climate: The Bay Area’s New Strategy for Clean Energy and Transportation 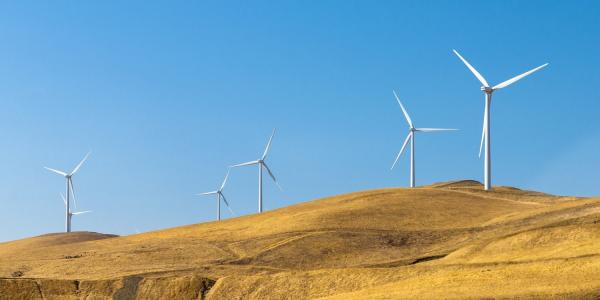 Switching energy uses to renewable sources will be key to meeting the Bay Area's goals for cleaner air. Photo by Sergio Ruiz.

Today the Bay Area Air Quality Management District adopted a major new climate action strategy that will move the region closer to attaining its goals for cleaner air and reduced carbon emissions. Spare the Air, Cool the Climate is a years-in-the-making plan that proposes a vision for a post-carbon economy by 2050, meanwhile reducing the air toxics and other traditional sources of air pollution that impair public health. SPUR reviewed the draft plan, and we strongly support its bold vision to demonstrate leadership and reduce emissions 80 percent below 1990 levels by 2050 — an effective decarbonization of our economy that will help stop climate change. It will also create a model for other urban regions to follow.

The post-carbon world that the Air District envisions is closely aligned with the vision we articulated in our 2016 report Fossil-Free Bay Area. In this world, our buildings are highly efficient, largely energy-producing (rather than energy-consuming) and fully powered by renewable energy. It is a world where bicycling, walking and transit account for a very high percentage of all transportation trips; when driving and goods movement are still necessary, they are served by autonomous, all-electric fleets, also powered by renewable energy. If we follow this plan, in 2050 we will have distributed energy storage and a smart grid, and we’ll substitute electricity for natural gas in domestic uses like hot water and heating. The region will lead the country and perhaps the world in developing both clean energy technologies and policy that supports innovation.

How will we get there?

In Fossil-Free Bay Area, we laid out a three-part framework that included key strategies and policy recommendations for local government and regional agencies to: 1. Consume less fossil fuel by increasing the efficiency of buildings and the transportation system; 2. Electrify most energy uses; and 3. Supply 100 percent renewable electricity. This framework borrows from the Deep Decarbonization Pathways Project, an international research collaboration, as well as research that the Air District undertook in 2015. We sought in Fossil-Free to identify those actions that local governments could take that would complement climate actions being implemented by the state and federal governments. We also tried to highlight those actions that only local governments can take, that make a big difference to emissions in the long run: such as building compact, walkable cities and adopting energy-smart building codes.

The Air District’s framework in Spare the Air, Cool the Climate is broader in three respects. First, it addresses not just climate change but the traditional sources of air pollution like particulate matter, ozone and toxics: It is a complex, “multipollutant” plan that considers how to reduce emissions across the board, recognizing that they are often co-emitted and interactive and that tradeoffs should be considered together. Second, it addresses every kind of air emission in the Bay Area, not just those associated with burning fossil fuels for energy. This includes methane produced at landfills and wastewater treatment plants, as well as “super GHG” emissions that have an outsized greenhouse effect, such as black carbon and fluorinated gases. Third, it considers the geography of the region as it seeks to improve air quality for those populations that have the greatest health risks and vulnerabilities to bad air. The Air District has been working for many years to address these disparities, and this plan takes those efforts even further, especially in proposed regulations that would reduce emissions from the region’s five large refineries, located in Richmond, Rodeo, Benicia and Martinez.

As we found in Fossil-Free Bay Area (using the Air District’s data), our region is starting on the path of reducing emissions even while we add people and jobs, but there is still more to do. 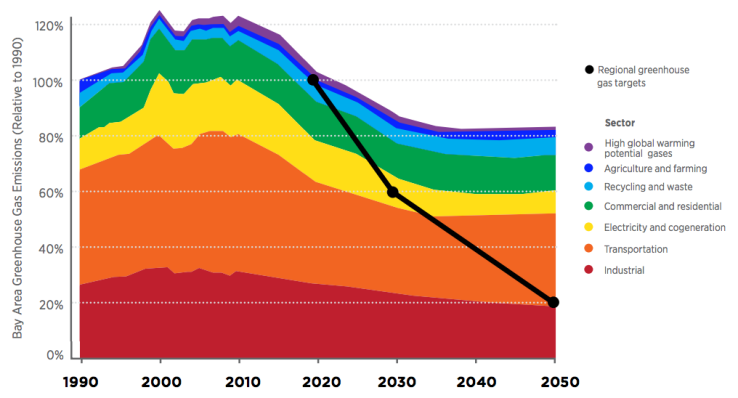 The chart above shows actual greenhouse gas emissions between 1990 and 2010 and modeled emissions and projections (relative to 1990) from 2010 through 2050. The projections account for the effect of existing climate and fuel policies, plus those widely expected to be adopted in the future. The black line shows the Bay Area’s goal of reducing emissions 80 percent below 1990 levels by 2050. The significant difference between this target and the projected emissions shows that more policies, programs, incentives, pricing and other tools must be invented and implemented for the Bay Area to achieve its emission-reduction goals. The Air District’s new clean air plan aims to usher in our next big push to get there, using its toolbox of regulations and rulemaking, permitting, incentives and funding, education, and partnerships with local governments.

Will we succeed? Perhaps the greatest challenge of this ambitious new plan is that its success will require much more money, regulation, new technology, private and public sector cooperation, planning and implementation than the Air District has direct control over. That means it is up to all of us, in our various roles, to help secure the future of this plan. We need to urge local governments to build clean energy and avoid building new fossil-fuel facilities. We need to take transit more, walk more and advocate for more walkable cities. We need to make our buildings efficient while switching to electricity for everything we can and choosing clean energy sources.

The good news is the Air District and the Bay Area have a track record of success. Chapter 2 of the new plan reveals that we reduced smog levels 99 percent  between 1988 and 2014, we’ve cut particulate pollution 50 percent  since 1990 and we’ve reduced lifetime cancer risk from exposure to air toxics 80 percent since 1990. 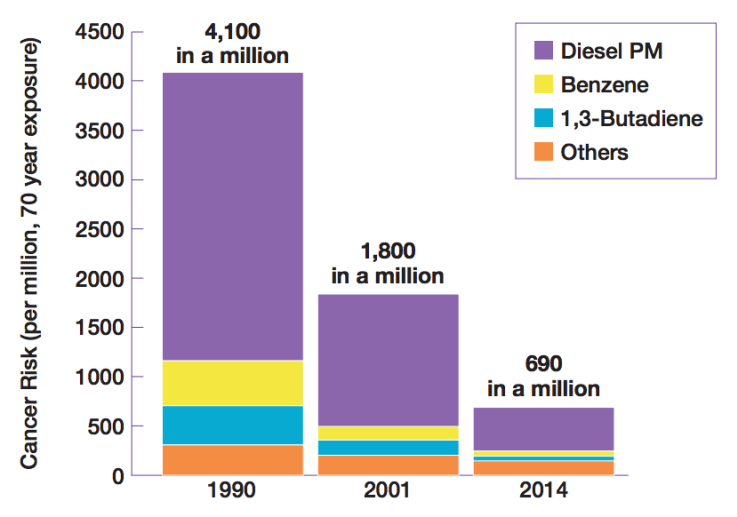 These are astounding successes that we can build on to make progress in reducing climate change emissions — especially in communities that still suffer from greater levels of risk and health disparities.

SPUR believes that with all of the Bay Area’s resources, innovative spirit and concern for the fate of the planet, it is our responsibility to demonstrate a model of decarbonization that can be replicated around the country and the world. By seizing the opportunities highlighted in Fossil-Free, and the Air District’s new plan, we can begin making this progress now.