By Ratna Amin and Graham Pugh 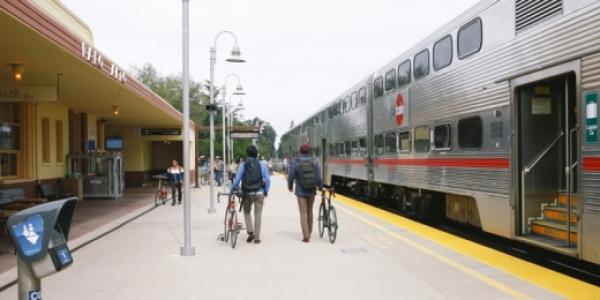 Historic stations are one of the legacies of Peninsula rail. However, the “first and last mile” challenge of getting to and from rail stations presents a barrier to rail’s usefulness for today’s riders.
Photo by Zack Dinh.

The Bay Area Peninsula travel corridor — the roads and transit routes connecting the string of cities between San Francisco and the Santa Clara Valley — faces serious transportation challenges. But the Peninsula wasn’t always jammed with cars. In fact, it grew up around rail, in the form of compact and walkable communities.

Is the Peninsula’s legacy of trains and transit-oriented neighborhoods enough to make rail a thriving transportation option for the corridor in the future? Can it be the backbone of a more sustainable system that improves our quality of life? We think the answer is yes. To help shape this vision, we are partnering with Stanford University, the Silicon Valley Leadership Group and the San Mateo County Economic Development Association to figure out the big policy, infrastructure and funding moves needed to keep this corridor working for decades to come. Part 1 of this post (below) looks at how we got into this fix. In Part 2, we follow up with a look at what’s planned for the future and SPUR’s upcoming work. 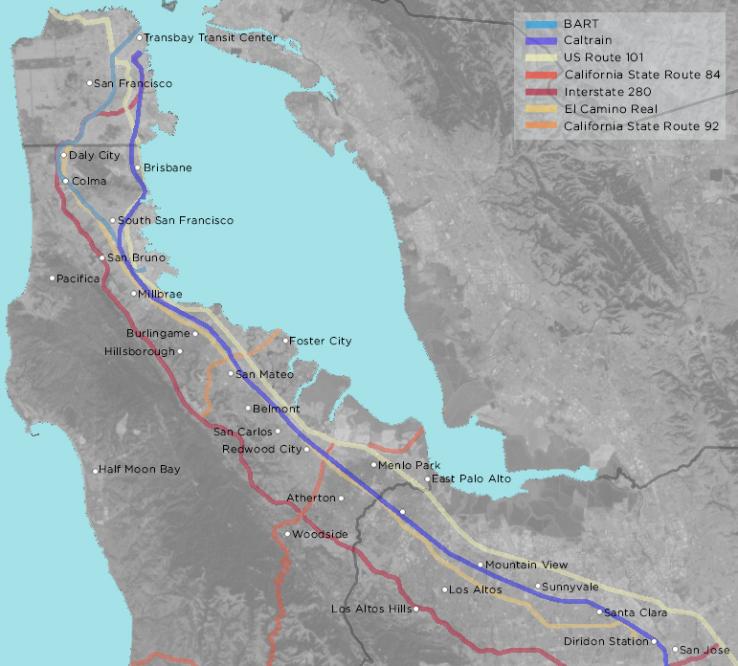 The Peninsula corridor consists of the highways and transit lines that connect the cities between San Francisco and the Santa Clara Valley. While highways carry most trips in the corridor today, the Peninsula’s cities originally grew up around rail.

The corridor today is stretched to capacity. For car travelers, highways such as 101, 84, 92 and 280 are painfully crowded. Rush hours in the morning and afternoon are becoming longer and longer, and trips during these times can take twice as long as normal. (Few stretches of these freeways have carpool/high-occupancy vehicle lanes, and none have high-occupancy toll lanes yet.) For transit travelers, Caltrain and the buses along El Camino Real/The Alameda  — the boulevard that connects 18 cities between San Francisco and San Jose — are also slowing down. A bus on El Camino Real takes almost three hours to travel the 29 miles from Daly City to Palo Alto.

Meanwhile, Caltrain is straining to accommodate the unprecedented surge in ridership that began after the 2004 introduction of the Baby Bullet, an express service that travels between San Francisco and San Jose in about an hour. The agency has not been able to add significant new service to meet the demand, particularly because it lacks a dedicated source of funding.

Caltrain users faces some major challenges: very limited (and slow) midday service and significant “last mile” gaps when a traveler’s final destination isn’t located next to a rail station. This is why so many riders try to bring their bikes on Caltrain (and why bike ridership on Caltrain has reached a record, averaging 6,207 bikes on board per day). Another challenge for Caltrain is contending with the cars, pedestrians and cyclists that encounter its tracks at 40 different at-grade street crossings. 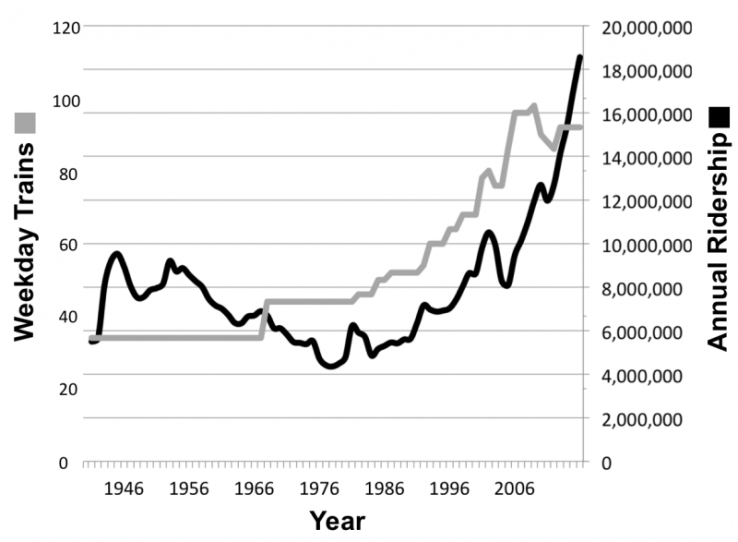 Because of these challenges, most travelers in the Peninsula corridor choose to drive. How did we get here? Can understanding the history of the corridor help us plan for the future?

Rail service has a long history on the San Francisco Peninsula; Caltrain just celebrated 150 years of rail service. First proposed in 1851, the San Francisco and San Jose Railroad — the forebear of today’s Caltrain — officially opened for service in January 1864. For the next 90 years, this railroad, which was merged into Southern Pacific in 1870, was the dominant means of transporting people and goods up and down the Peninsula. (Previously, water ferries were required.) Local streetcar networks complemented the rail line, including the San Mateo Interurban line, providing service from San Francisco to San Mateo starting in 1892, and the Peninsular Interurban, providing such service from San Jose to Palo Alto starting in 1902.

This early rail era left an indelible mark on the Peninsula. Towns and villages grew around the rail stations, forming a string of dense, walkable downtowns that characterize the cities of the Peninsula to this day. Until World War II, these towns were small, with productive farmland at their edges. The Santa Clara Valley was dubbed the “Valley of Heart’s Delight,” and its farms and agricultural lands produced goods that filled many of the northbound freight trains on their way to San Francisco. 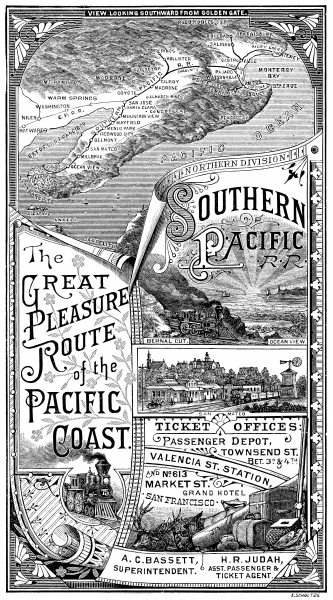 1885 Advertisement for the Southern Pacific Railroad. (Public domain, via Wikimedia.)

The first major limited access road or “freeway” in the corridor — the Bayshore Highway, which would later become 101 — began construction in 1924 and reached from San Francisco to San Jose in 1937. Like many freeways, it was intended to alleviate congestion — in this case, on the three-lane El Camino Real. By 1946, 25,000 cars per day used the new highway to traverse the Peninsula, while approximately 26,000 passengers traveled by rail daily.  (See The San Francisco Peninsula Railroad Services: Past, Present and Future, by Mark Duncan.)

The end of World War II brought major shifts in both passenger and freight travel patterns in the corridor. Beginning in the 1950s, suburban housing, office parks and factories for the emerging “Silicon Valley” began to take over agricultural lands. Commuter rail service on the Peninsula hit its postwar peak in 1954, with 9.2 million annual boardings — a number that would not be surpassed for nearly 50 years. The postwar explosion in car ownership, combined with increasing federal and state investment in highways, began to chip away at both passenger and freight rail usage. Car-oriented development patterns rendered rail less practical. Thanks to the resulting wide roads and spread-out destinations, people began to find they needed to drive just to make basic trips to the store or have lunch on the other side of a busy arterial.

During this period, employers often located their offices in places with ample land for production (and parking) — and not around the historic rail system. The locations that got the growth — such as Xerox’s Palo Alto Research Center, North Bayshore in Mountain View and North San Jose — were all far from Caltrain stations. The 1962 completion of the eight-lane Bayshore Freeway further eroded the importance, and revenues, of the railroad. Passenger rail volumes reached their nadir in 1977 with 4.4 million annual boardings — only 46 percent of the ridership of 23 years prior.

By 1964, the railroad — then operated by the Southern Pacific — was no longer profitable. In 1980, after years of requests, the State of California Department of Transportation (Caltrans) agreed to take over the funding and managing of the Peninsula commute service, contracting with Southern Pacific as an operator. The “CalTrain” brand began with the 1985 purchase of new train cars, which replaced old Southern Pacific equipment. In the early 1990s, the Peninsula Corridor Joint Powers Board  —  composed of, Santa Clara, San Mateo and San Francisco counties — purchased the right-of-way and began managing the line. Due to new investment in the stations and service, congestion on Peninsula freeways and new employment throughout the area, ridership began to grow significantly.

Recently, Caltrain’s Baby Bullet service, the addition of new train cars and the completion of projects such as grade separations have contributed to Caltrain’s further ridership growth, as have the continuing growth in housing and jobs in the corridor.

Caltrain’s improvements have not been the only passenger rail advances in the corridor. In 1998, the San Francisco Municipal Transportation Agency extended its N Judah light rail line to the 4th and King Caltrain station, and in 1999, the Santa Clara Valley Transportation Authority extended its light rail west to the Mountain View Caltrain station. In 2003, San Mateo County and the SF International Airport opened an 8.7-mile extension of BART from Daly City to the San Francisco International Airport (BART connects with Caltrain at Millbrae Station). While the San Mateo County BART alignment largely follows the old San Mateo Interurban line, the five BART stations along the extension don’t have the benefit of being located in existing downtowns; they are largely surrounded by parking and low-density neighborhoods.

Can rail again play a leading role in shaping Peninsula transportation? What will it take? In Part 2 of this blog post, we take a look at what’s planned for the future of rail in the corridor, along with the big transportation questions SPUR and its partners are working on.