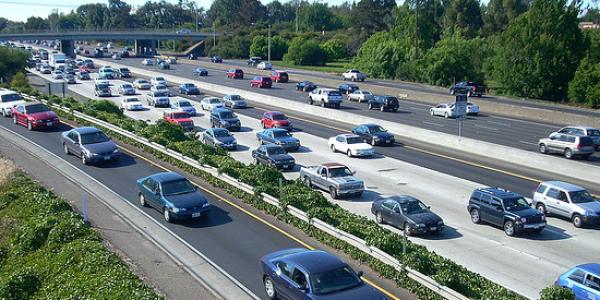 Despite more than $1 billion in capital investments to Highway 101 over the past 20 years, the link that connects San Francisco and Silicon Valley is as congested as ever. Drivers on Highway 101 experience some of the worst traffic delays in the Bay Area, according to the Metropolitan Transportation Commission. But alleviating traffic on 101 will require more than just better management or expansion of the freeway. Giving travelers viable alternatives to driving — through transportation and land use changes — is imperative to the future of the corridor. Below is a three-pronged approach to managing growth in the corridor.

1. Encourage the efficient use of 101 by incentivizing carpools and earning funds for public transit.

Three county transportation agencies — in San Francisco, San Mateo and Santa Clara counties — are actively working to change the way drivers use 101. SPUR recently convened these agencies to hear their plans. (You can download presentations from the forums we held in San Francisco and San Jose.) The San Francisco County Transportation Authority recently won a Caltrans grant to study ways to manage highways 101 and 280, while the Santa Clara Valley Transportation Authority (VTA) plans to widen much of 101 and implement 36 miles of express lanes, offering solo drivers the opportunity to drive in lanes usually reserved for carpools of two or more in exchange for a fee. In San Mateo, the County Transportation Authority, along with the City/County Association of Governments (C/CAG) has proposed to build a new lane on 101 and convert an existing lane into a carpool lane.

But transportation advocates pushed back on the San Mateo County proposal, saying history has proven that widening freeways doesn’t reduce traffic, and in early July, the C/CAG Board of Directors voted to study converting a general purpose lane to an express lane, rather than widening the freeway. Transportation advocacy group TransForm argues that revenues from the express lane should be used to fund public transit and other alternatives to driving. This solution, however, would require county transportation agencies to take a proactive stance against California law AB 798, which specifies that only existing carpool lanes may be converted to express lanes. C/CAG’s decision to study this solution shows a willingness to re-examine a law that makes it more difficult to achieve the state’s carbon emission reduction goals.

Transportation solutions can only go so far: Slow freeways are as much a land use issue as a transportation issue. Increased traffic on 101 corresponds to the improving economy in a place where too many jobs are located far from other transportation options like regional transit. The long-term solution is to add both jobs and housing near transit hubs, giving travelers a reasonable alternative to driving and allowing 101 to be used more efficiently.

One challenge of the 101 corridor is that most jobs are near Highway 101, not around Caltrain stations. In fact, 75 percent of the Bay Area’s jobs are within a half-mile of a freeway off-ramp, while less than a quarter are within a half-mile of a regional rail station (like Caltrain or BART). Large employers like Apple and Facebook have planned campus expansions far from transit, despite their employees’ traffic woes. Placing jobs in locations that are most easily accessible by car, with free parking, leads to people driving to work. Shuttle buses certainly provide an alternative, but they don’t pick up every employee — and they get stuck in the same traffic as everyone else.

Even if more companies wanted to locate next to Caltrain (as is already happening), there simply isn’t enough space right now. Furthermore, some peninsula towns have limits on the amount of space zoned for jobs near Caltrain. One solution: Change local zoning to permit the amount of development necessary to accommodate all that transit-oriented job growth. A second important step is to adopt and adhere to proven urban design principles. When we grow near transit, we have just one chance to ensure development is designed in a way that actually supports walking, biking, transit and other transportation choices.

Even with the addition of jobs near Caltrain, there’s still the issue of adding housing nearby. In peninsula cities, jobs significantly outnumber housing capacity. This means competition for a place to live in cities like Palo Alto and Menlo Park is fierce, and those that can’t afford to live there suffer long commutes instead. As we know, cities on the peninsula that have a lot of jobs but not a lot of housing have a lot of car traffic coming in and out.

In the 101 corridor, an obvious alternative to driving is taking Caltrain. But even there, riders have started to complain about cramped quarters in the increasingly popular rail line, which has seen ridership jump 54 percent since 2010. At peak hours, many trains are full and passengers with bikes are occasionally denied entry. While the electrification of Caltrain is one solution to increasing capacity, the project isn’t expected to begin service until 2019.

Short-term solutions for increasing capacity on Caltrain include re-configuring cars to better accommodate standing passengers and those with bicycles; dedicating trains to certain trips; extending trains by adding another car; and upgrading the signal system. These solutions, however, may not be able to address the rapid increases in ridership that Caltrain is currently experiencing. Caltrain is just one part of our regional transit network, and we must improve the way all the parts work together, including VTA and Samtrans buses and bus rapid transit, VTA light rail, BART, Muni, public and private shuttles, Bay Area Bike Share and even taxis.

To get people moving again, the most effective solution will be to retrofit both transportation and land use. As we continue to add jobs in the Bay Area, commute times will also increase. Caltrain will get more crowded. Ensuring a good quality of life for Bay Area residents will require cooperation throughout the corridor to enact a synchronized vision for the region.