The Time Is Now for Business Tax Reform

San Francisco’s technology sector is booming once again, the real estate market appears to be in full recovery mode and office vacancies are at record lows. The city’s economy is quick to catch fire, but it’s also prone to downturns. This has benefited the city’s coffers and the public services they support, but it forces difficult decisions when fortunes turn for the worse.

These boom and bust cycles have exposed the importance of consistent sources of revenue for the city. Repeated economic fluctuations — as well as the recent recession — have shown the inherent volatility of the city’s business tax. A flat 1.5 percent tax on all payroll expenses above $250,000, the business tax is the city’s second largest source of revenue for the general fund (it brings in approximately $410 million per year), behind only the city’s property tax. But the payroll tax has fluctuated dramatically from year to year. In fact, it has increased more than 10 percent year-over-year four times in the last decade and actually declined on four separate occasions in the same period.

Growth in Property Taxes, Business Taxes and Employment in SF 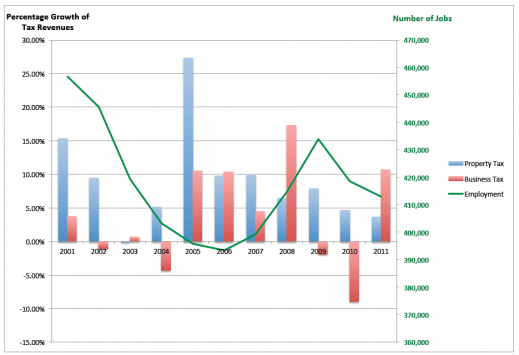 While property taxes have grown in almost all of the last 10 years, the payroll tax has experienced four years of losses. These fluctuations do not reflect growth or loss of employment.Source: San Francisco Consolidated Annual Financial Reports and California Employment Development Department.

To address this volatility, Proposition E on the November ballot would replace San Francisco’s payroll tax with a gross receipts tax, a more common and more stable tax structure found in cities throughout California.

In the decade since the legal settlement forced the city to choose between the payroll or gross receipts tax, there has been general agreement that San Francisco’s business tax needs to be reformed but little consensus about how that might happen or what might succeed the payroll tax. SPUR and much of the business community have argued that we should restructure the city’s tax system to remove disincentives to hiring inherent to the payroll tax. Reform has been attempted at least three times in the last decade, but those efforts were ultimately unsuccessful. Instead, the city has more recently adopted a new tactic: payroll tax exemptions, also known as “governing by exception.”

Since 2001, the city has granted payroll tax exemptions to a number of companies to keep them from leaving San Francisco once they grew large enough to be affected by the payroll tax. Prior to 2011, these exemptions were used exclusively to grow the biotechnology sector. But in 2012, separate exemptions were also granted for stock-based compensation and for new businesses locating in the Mid-Market area, exemptions targeted largely at growing technology companies. These incentives have unquestionably been effective: Zynga and Salesforce maintained their corporate headquarters in the city, and technology companies have been attracted in droves to Mid-Market, starting a renaissance that has failed to take root in the neighborhood ever since the construction of BART down Market Street.

But something else has happened in the years since the city opted for the payroll tax: Two significant downturns and three economic booms have driven uneven growth. In fact, the city’s budget has increased by nearly 50 percent in the last 10 years while inflation grew only 31 percent. These cycles have been further exacerbated by the fact that these funds are driven by less than 10 percent of businesses in the city: Only 7,500 of the city’s more than 96,000 registered businesses pay business taxes.

Business taxes are certainly not the only reason that companies come to — or stay in — San Francisco. There are myriad factors that play into location decisions. But given the volume of voices that have called for tax reform, as well as some prominent relocations of major companies, it certainly can’t be ignored.

How does a gross receipts tax work? To be honest, it can get very complicated, very quickly. But there are four main ways that Prop. E changes how businesses will be taxed in San Francisco:

More important than the sum of these benefits is the road traveled to develop Prop. E. Discussions with such far-reaching implications are frequently contentious, and several reform attempts in the past decade have ended with no change at all. This process, however, was marked in its collaboration and communication. In the first six months of this year, San Francisco Mayor Ed Lee and Board of Supervisors President David Chiu worked with City Controller Ben Rosenfield to conduct a months-long outreach process. Involving literally hundreds of companies and other stakeholders, and informed by detailed analysis, the final proposal is the result of sustained engagement and extensive collaboration. This level of complexity seldom yields perfection, but this is certainly a preferable route to contentious fights that lead to no change.

One of the compromises achieved by this process was around new revenues. Though not the original intention, Prop. E generates $28.5 million of new revenue for the city’s General Fund. These funds are not programmed for anything specific at this point, but strong commitments have been made to direct funds to SPUR priorities such as affordable housing and the Housing Trust Fund, as well as to Muni maintenance and operations.

Given this level of complexity, the road to passage will be anything but easy for Prop. E. With a number of other important measures on the November ballot, tax reform is a topic to which few voters pay attention. Previous efforts, while not as well developed or supported, have suffered at the ballot for lack of understanding. And regardless of the collaboration and extensive agreement, the minutiae of the measure could complicate matters significantly when it reaches voters.

But for all of these reasons, Prop. E also presents a tremendous opportunity. The stars seldom align to present the voters with a unified front for such a complex change, and we should seize the moment — and the momentum — to make the transition.

This is the time for San Francisco to move past the payroll tax. Join us in supporting Prop. E on November 6.

Still have questions? Look for our complete ballot analysis in the SPUR 2012 Voter Guide.