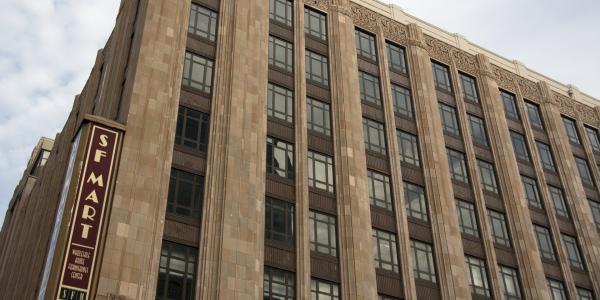 San Francisco might be the cultural center of the region, but in the technology sector the city has generally played second fiddle to the Silicon Valley. That began to change during the dot-com boom and then again more recently, a new generation of startups is setting up in neighborhoods like SoMa and Potrero Hill. (SPUR discussed the trend in its “year in urbanism” recap.)

One of the most well-known of these emerging technology companies is Twitter, which has been headquartered in SoMa since its founding. So the announcement a few weeks back that Twitter is looking at moving its headquarters southward to Brisbane is a worrying development. This has led to a response by San Francisco to try to keep Twitter in town – specifically, the Board of Supervisors is considering a payroll tax break for firms that move into the Mid-Market neighborhood, which is where the city hopes to convince Twitter to relocate.

City officials hope the legislation, planned to be introduced at the Board of Supervisors meeting today, will boost jobs and provide a means to help revive the downtrodden stretch of the city's grand boulevard. The once-bustling theater district has resisted efforts to spruce it up for decades, but it has been showing signs of promise over the past two years with efforts to attract artists, theater groups and a shopping center.

But more generally, the threat of losing the headquarters of such a successful and growing firm serves as an ongoing illustration of how hard it can be to keep firms in SF, and gives us an opportunity to consider ways to keep these jobs in the region’s core.

The difficulty of doing business in San Francisco is often exaggerated, but there is certainly some truth to the idea that some city policies can act as a drag on companies, particularly as they begin to grow:

1.   Payroll taxes: San Francisco requires businesses over a certain size to pay a 1.5% payroll tax, unique among Bay Area cities. Taxing payroll is a direct disincentive to hiring additional workers and makes San Francisco particularly less competitive for growing firms, particularly in industries with significant amounts of venture funding and other risk capital. The City had already identified this as an issue before the discussion around the Twitter move, having waived it for biotech companies. The Board of Supervisors is expected to consider an overhaul soon. (More on SPUR’s views on business taxes here and here.)

2.   Lack of office space: Even with the recession, San Francisco County has the Bay Area’s lowest office vacancy rate (14.5%), and not much construction is planned in the immediate future. More generally, Proposition M, passed by the voters in 1986, imposes strict limits on office space growth downtown; this might limit the damage done to the rental business during crashes, but it also means less new space for job growth in the region’s most transit-rich district. This issue was among the problems cited when SPUR considered the future of Downtown San Francisco.

3.   Outdated spaces: Even when space is available, it might not be fit for the needs of growing companies. This is not only due to issues with the facilities themselves (e.g., small floorplates), but also because high growth companies like Twitter need the ability to lease additional space as the need arises – flexibility that is not common, and made less so by San Francisco’s tight market.

While the payroll tax exemption before the Board will be a great tool for bringing employment to the Mid-Market district, and may potentially keep Twitter around, this solution will still not change the overall city’s attractiveness for employers in general. While Twitter is a valuable asset (many other startups have literally popped up in its shadow, helping to form a new Web 2.0 cluster), San Francisco needs to address the deeper issues that drive growing companies down the peninsula.

Moreover, this example of Twitter flirting with Brisbane also serves to demonstrate the downsides to the Bay Area’s lack of regional co-operation. Assisting certain companies to be in San Francisco instead of Brisbane may be to San Francisco’s specific benefit. But a race to the bottom among the region’s municipalities will ultimately benefit no-one other than the employers who choose to game the system.

Instead of one-off confrontations focused on individual employers, the Bay Area needs to begin to employ a regional approach to economic development – one that allows cities to target certain sectors, but also avoids conflicts that reduce our tax base without actually adding jobs. As SPUR has argued in the past, it’s time for the Bay Area to adopt a real economic development strategy, with proactive measures to create jobs, rather than reactive ones meant to keep them.