New PPIC Report Argues for Jobs, Not Homes, Near Transit 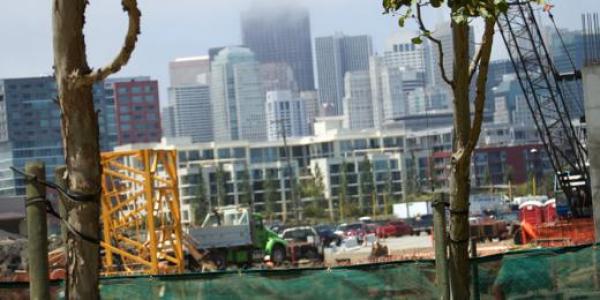 Image by Colleen McHugh for SPUR

The Public Policy Institute of California has just released a new series of reports assessing how prepared California is to implement Senate Bill 375, a state mandate to reduce driving through better land use planning. One report focuses on the connection between transit and jobs. The other focuses on the tools planners can use to reduce driving and the willingness of local officials to use them. The reports are also summarized in a single report, which was presented and discussed at an event today in Sacramento.

The report on transit and jobs, “Making the Most of Transit: Density, Employment Growth, and Ridership around New Stations,” is of particular interest to SPUR's work. Based on extensive analysis of new development since 1992 around new rail stations in California, the report argues that achieving the state’s mandated reductions in driving will require increased attention to the location and density of employment. The report highlights several important trends:

1.    Employment density (roughly the number of workers per square mile) in California is 15 percent lower than the national average and declining. This is largely happening as work spreads out away from traditional downtowns to smaller centers or non-centers throughout metropolitan areas. And employment density is more strongly associated with transit use than residential density.

2.    Residential density is higher than the national average and increasing. It is 49 percent above the national average and rose from 1990 to 2008 while residential density nationally remained flat. This is largely because new development is denser than historic development in most places and because population is increasing at a faster rate than sprawl’s outward march.

3.    The location of one’s job relative to transit is a more important factor in determining whether or not someone will take transit than how close someone lives to transit. This is (as the report states) because “high employment densities appear to boost transit ridership (and therefore reduce VMT) more than high residential densities.”

4.    While rail is a major component of transportation spending, new stations and lines have not resulted in major changes in ridership. According to the study, between 1992 and 2006, 217 new rail stations (including several bus-rapid-transit stations) opened in the state. From 1990 to 2008, transit as a share of all commuting statewide increased from 5 percent to 5.5 percent.

This is an important paper that challenges conventional notions of TOD. It also reinforces many arguments SPUR has been making in recent years.
SPUR began analyzing issues around employment and transit in 2006 with the beginning of our work on the Future of Downtown San Francisco. In our policy paper we argued that important regional transit locations such as the half mile areas near downtown San Francisco’s BART stations make more sense for commercial than residential development. This argued against the predominant thinking at the time, which was to make downtowns more lively and “livable” through adding as much residential development as possible.

As metropolitan regions engage in the creation of Sustainable Communities Strategies, two lessons from the PPIC report as well as prior SPUR reports are clear:

1.    We should revise SB 375 to allow dense commercial development around transit to access the same incentives as residential development.

2.    We should revise the housing bias in ABAG’s Focus program and Priority Development Areas as well as MTC’s transit expansion criteria (Resolution 3434) to encourage communities to plan for dense commercial development immediately adjacent to rail stations. Residential is not the only use that we should be trying to get locals to plan for near transit.

The PPIC papers give major research support to the argument that the goal of reducing driving will not happen unless there is more of a statewide focus on employment density.