Governor Jerry Brown and the state legislature extended and strengthened the most ambitious climate change law in the United States.

With existing national climate mandates vulnerable under the incoming federal administration, this kind of state-level leadership is more important than ever.

A decade ago California passed the nation’s first climate law, vowing to slash greenhouse gas emissions by 2020. While the state is well-positioned to meet that goal, the new law — to cut emissions 40 percent below 1990 levels by 2030 — is considerably more ambitious, calling for double the reductions each year. The ambitious 2030 target is a crucial step toward the state’s long-term vision of a near-zero carbon economy by midcentury.

Researchers at Lawrence Berkeley National Lab found that meeting California’s new 2030 law (SB 32) will require much deeper controls on climate pollution but would be achievable with existing technology and by strengthening current policies. [1] To date, the state has met its 2020 target (codified under AB 32) through a suite of regulations and laws governing the carbon emission of new cars, the share of electricity that comes from renewable energy, the carbon intensity of fuels and more. The state has also used cap and trade as a backstop to these targeted efforts, to achieve all remaining low-cost emissions reductions and to measure progress toward our overall climate goal. 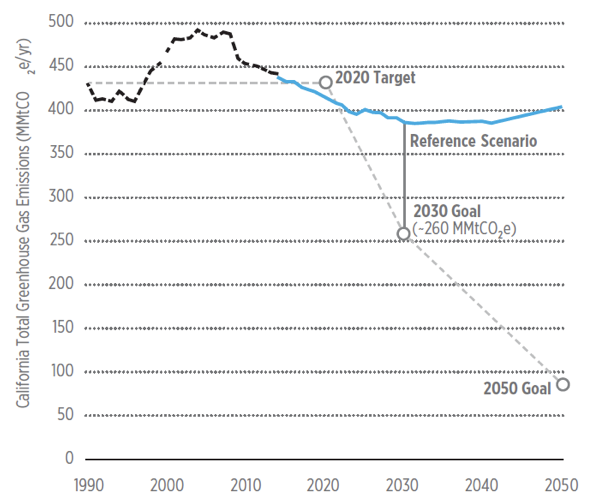 California’s newest climate law promises deep cuts in greenhouse gas emissions by 2030 and the potential for near-zero emissions by midcentury. The black dashed line shows actual statewide emissions; the blue line shows projected emissions without further policy; and the gray dotted line shows the pathway of the state’s climate ambitions, though only the 2020 and 2030 targets are enforceable by law so far.

The California Air Resources Board (CARB) is responsible for bringing laws and regulations together into a road map toward our climate goals. While CARB’s next plan is not yet finalized, the agency is considering four broad scenarios [2], all of which rely on bold new polices. Last year, for example, the state promised to increase building energy efficiency by 50 percent and to generate 50 percent of electricity from renewable sources, both by 2030 [3]. California also became the first in the U.S. to legally limit powerful, short-lived climate pollutants like black carbon, methane and hydrofluorocarbons [4]. The Governor’s Zero Emission Vehicle mandate will also help ensure that by 2025,1.5 million of the state’s new cars run on electricity or hydrogen, not gasoline. Among other changes, CARB is discussing strengthening the targets in the state’s Sustainable Communities Strategy (SB 375), which asks cities and regions to grow in patterns that minimize driving [5].

Passed in tandem with the 2030 climate goal, AB197 directs CARB to prioritize prescriptive emission controls over market-based policies like cap and trade [6]. This makes California’s cap-and-trade program less certain post-2020. Cap and trade works by first setting a cap on all emissions equal to our statewide goals. Permits, each representing a ton of greenhouse gas emissions, are then auctioned to emitters. Emitters have the incentive to reduce emissions at a cost lower than the permit price and then sell unused permits to other polluters with higher abatement costs. This process puts a price on carbon and gives businesses the flexibility to decide how to reduce emissions beyond what is already directly regulated. Flexibility means cost savings for businesses and consumers, and motivates businesses to remain in California.

California’s cap-and-trade program has provided roughly $3.2 billion in revenue to transit, housing, energy efficiency and natural resources projects since the first permit auction in November 2012 [7]. By law, 35 percent of these revenues have been spent either to benefit or build projects within disadvantaged communities [8]. Moving forward, CARB is considering a range of options, from keeping cap and trade, to replacing it with a carbon tax or forgoing a price on carbon altogether. While our state will meet its climate goal one way or another, this decision has major implications for how much our policies will cost the state, and whether or not we will have the revenue to continue the transit, housing, water, forestry and other green infrastructure projects that have started with cap-and-trade revenue.

Tackling climate change requires action across every sector of the economy and with consideration of and participation from all our communities. California has given other states a blueprint for developing their own climate policies — and proof that growing an economy and confronting climate change can go hand in hand [9].

[5] Researchers at E3 and Energy Innovation have found that this could be a critical step in meeting the ambitious 2030 target. See pages 4-5: http://energyinnovation.org/wp-content/uploads/2015/09/Moving-Forward-Summary-for-Policymakers.pdf

[6] This is a victory for environmental justice advocates who have preferred direct controls since the inception of California’s first climate law over a decade ago. See pages 5-7: http://brianegray.org/environmental-seminar-2014/ewExternalFiles/Hanemann,%20California's%20New%20GHG%20Laws.pdf

[9] Between 2011 and 2014, California’s GDP grew by roughly 8% compared to 6% nationwide (estimated from US Bureau of Economic Analysis data http://www.bea.gov/newsreleases/regional/gdp_state/gsp_newsrelease.htm and California jobs grew by 12% compared to 8% nationwide between 2011 and 2015, estimated from US Bureau of Labor Statistics Quarterly Census of Employment and Wages: http://www.bls.gov/cew/datatoc.htm