Here's how it's done in San Francisco. The Planning Department staff or the Planning Commission, or even the Board of Supervisors, decides to draw up a new plan for an area. Maybe it's because there have been too many controversies there, or because it seems like a good idea to either change or preserve the character of that neighborhood — how the buildings and streets look and are used. There is some squabbling about the boundaries, and then the process of creating a plan begins. The public is invited to give input at community meetings, given handouts, shown slides, and given a chance to ask questions or make criticisms. Six months later, the planners come back with a modified version of the original idea, pass out handouts, show the slides and ask for comments. This gets repeated for a decade.

Or perhaps somebody wants to develop a piece of property. Maybe they hold a community meeting and present the idea (which is probably pretty far along). Some people like it and drop out of the process, while opponents rally for a showdown. In the meantime, the Planning Department staff cranks up a study of all the environmental damage the project could do. Years later there's a hearing, then appeals.

Average San Franciscans are cut out of the process, nobody seems to have a clear idea of what urban planning can and cannot do, and sometimes it seems that the process itself is the product.

It's not a great system. We can do better.

Why the system doesn't work

It's hard not to notice at community meetings and public hearings that the crowd doesn't look much like San Francisco. Look around on the bus, in the streets, at clubs and at the grocery store. Are these the people engaged in the discourse about the future of our city?

There's a good chance you don't go to community meetings or hearings either. I don't blame you. But people do want to be heard and, believe it or not, we'd have a better city if they were.

It's easier to see why people don't participate than why they do:

Often, it's the same handful of people at every meeting, saying the same things. 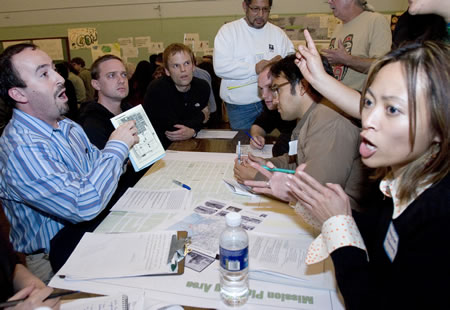 San Francisco’s usual community planning process too often doesn’t gain the
input of typical residents, and frustrates those people who do participate.
photo by Pia Torelli


There is a subculture of people who attend community advisory committee meetings and hearings, just as there are subcultures of participants at poker games, sex clubs, book clubs and AA meetings. We assume that people who join the planning club are better informed about the city's issues and care more about the future of the city. But is that a fair assumption?

People come to community meetings and hearings for a lot of reasons. Sometimes it's to learn and share good ideas, but sometimes the reasons are a little more obscure. Psychological reasons. Fear of change. Issues around control. Racism. Jealousy. Anger. And love — love of the city, and sometimes another kind of love.

From the San Francisco Chronicle of April 24, 2006, a quote from the opponent of a project in Alameda: "‘I've done everything I can to keep that land open. This is my love affair,' said a retired schoolteacher and grandmother of six whose husband is a former Navy lawyer." Frequently, the item on the agenda is only tangential to the real underlying issues.

From reading the local press or attending public hearings, one would think that every proposal is controversial, and that traffic, views and nostalgia for a time perceived as simpler prevails. But how true is that? How representative are attendees at meetings? Who do leaders speak for?

The way we plan now works well for some

Planning commissioners and elected officials get to step into the vacuum and make deals. Consultants get hired as guides. The lengthy review processes help maintain the status quo. But meanwhile we have a type of "redlining by planning." Who could know what can be done in a neighborhood while the rules are up in the air?

Not only are these exercises expensive and lengthy, they also squander the goodwill that residents have toward planning, burning out participants and driving away others.

Maybe it's time to step back and ask what we expect from the public dialogue about the city. We can create a space to learn from San Franciscans about the cities they live and work in.

I write "cities" because we each experience he city differently. I have a map of Paris that illustrates this. It has no streets or landmarks, just the outline of the city and two colors labeled "J'y vais" and J'y vais pas": I go here, I don't go there.

The Vietnamese nail salon worker who lives in the Tenderloin and works in the Richmond, the widow who hasn't left the Sunset since I. Magnin closed, the student who lives at Parkmerced but spends all her time on Valencia Street, the kid from the projects who goes to Wallenberg High School, the undocumented dishwasher — each has his or her own way to use the parts of the city they use, with little overlap. And they each have a different relationship with the history of San Francisco and his or her own hopes for the city's future. We can't weave these narratives together in a meaningful way by starting at the end of the story, with the buildings and the spaces in between.

We need to look not just at the ways people use the city, but also at how they use buildings. What is an office in a city where 18 percent of the residents are self-employed and some others probably work from home? What is a café where half the customers are working on laptops?

In Rincon Hill, an area recently re-zoned to accommodate about 3,000 new residents, the planners rightly want more than a district of condos. So they mandated that new residents pay into a fund to purchase and develop a park site and to rent and rehabilitate a union hall into a community center. But what is a "community center" in a district of high rise condos? How would a park be used? Neither have an identifiable constituency.

How to involve such a heterogeneous crowd in the discourse?

The first step is to see our current practice for what it is: a tired 19th century relic, more meaningful as ritual than useful as a tool.

What can we do?

David Prowler was a VISTA tenant organizer, San Francisco planning commissioner, community planner in Chinatown, the mayor's project manager for the Giants ballpark and Mission Bay. He now advises public agencies, non-profit, and developers on development and planning. He is president of the board of the Homeless Prenatal Program. E-mail David Prowler at david@prowler.org