What’s Next for Guadalupe River Park and San José? 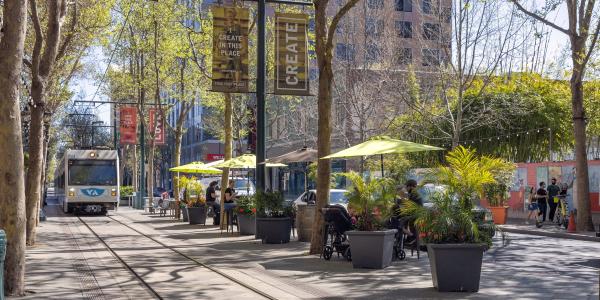 During the pandemic, San José's public spaces welcomed residents and visitors while supporting local businesses. SPUR's next phase of work in San José will include policy ideas for continued public space activation and economic recovery. Photo by Sergio Ruiz for SPUR

Since 2018, one of SPUR’s top priorities has been research and planning for Guadalupe River Park, the 2.6-mile linear park that follows its namesake river through the western side of downtown San José. Our work has focused on understanding the park’s current challenges, investigating what is possible, raising community understanding and awareness, and inspiring a conversation around the power of place. This research culminated in January with a virtual exhibition, and we are now excited to announce our plans to move forward with policy ideas for the river park and other areas in and around downtown San José, supported by essential funding from the Knight Foundation.

Since we began our work on the river park, San José’s plans for the area around the park have become more clear. Google’s proposal to build its next campus adjacent to the park has been approved, and investments in Diridon Station to support improvements to Caltrain and the extension of BART continue to be a priority at all levels of government. But while there’s been considerable excitement for the continued commitment and investment in areas around the park, there’s also some collective apprehension about what this means for Guadalupe River Park itself.

The river park sits in the middle of much of the planned growth, and its reinvigoration and health will become fundamental to the success of those plans. Renewed support, enhanced stewardship and a sustainable funding stream will be needed to realize the park’s potential, so that this vital public space can become safer, cleaner and better used by all members of the community. We believe that for the area surrounding the park to succeed, equal attention and investment must be made to the park itself.

One of the challenges facing the park is a lack of clarity about how it should be managed and by whom. Building on the work we’ve completed, we are excited to announce that, through an investment made by the Knight Foundation and in partnership with the Guadalupe River Park Conservancy and the City of San José, SPUR will undertake an effort to identify governance models for the park and provide recommendations for stewardship of what could be San José’s central park. This will be no easy task. As was revealed in an August 2020 City of San José city audit, parts of the park are in dire need of renovation, with some areas even in a state “beyond repair.” We strongly believe in the future of the park and believe it will greatly benefit from being named a city-wide priority, which would go far in unlocking additional staff capacity and resources.

Creating Lively Urban Spaces, Both In and Out of the Park

Knowing the park is not an island, the Knight Foundation has also funded work that includes research and analysis of park-adjacent land uses along Coleman Avenue. A commitment to renewing activity in the park also deserves a commitment to nearby opportunities for complementary development that will support active park uses. Coleman Avenue is uniquely situated near downtown and the airport, with a large concentration of retail and commercial businesses and one of the few remaining areas with industrial use.

SPUR plans to undertake this work by convening a committee of cross-sector partners including the Guadalupe River Park Conservancy, San José Downtown Association, Veggielution, Mineta San José International Airport, and city staff from San José Parks, Recreation, and Neighborhood Services, as well as the Department of Transportation. We will host several workshops and publish a policy roadmap for how these plans can be carried out in an equitable manner. These areas have immense potential for redevelopment and growth, and we plan on making recommendations that will support viable complementary development alongside the park’s continued growth.

With this work, SPUR’s goal is to help steward a shift in engagement practices toward an increased focus on equity and fostering strong community partnerships. In order to see this work through, we will develop new strategies to build trust, broaden the reach of our engagement initiatives, and create platforms for dialogue about neighborhood change and diversity, equity and inclusion in planning.

A Look Toward Greater San José

For the past several years, much of SPUR’s work in San José has been focused downtown. This year, with expanded capacity made possible by the Knight Foundation’s support, SPUR will begin to shift some of its focus to economic recovery in downtown and beyond. The city is growing alongside key investments in local infrastructure and regional transit. Now is the time for strategies that will center equitable community and economic development for generations to come. The City of San José plans to reimagine Santa Clara Street by improving the community’s access to transit and other sustainable transportation options. It also plans to support businesses by using economic recovery efforts such as the Al Fresco program. This important work must connect with the city’s increasing development to the east, along Alum Rock Avenue. Our work will focus on planning for safe streets and activation that will contribute to a connected and welcoming central San José corridor. This work will create a vision for how much more could be achieved if the city’s many existing plans and programs for streets were aligned, and if those plans were co-created by business, advocacy and community groups.

Beyond downtown San José, we will look at how to create neighborhoods where everyone is able to meet most, if not all, of their needs within a short walk or bike ride from home. This idea, called the “15-minute city,” is both a way to support connected, lived-in, people-friendly neighborhoods and an economic recovery strategy to help cities revive urban life. SPUR believes that this framework could offer a positive future vision for communities and their leaders after the far-reaching impacts of the COVID-19 pandemic. Our work will develop an equitable 15-minute framework and policy toolkit for the city’s Urban Villages. We will specifically take a look at the Five Wounds, Little Portugal and Alum Rock Urban Villages as case studies for how neighborhoods with legacies of deep cultural heritage can center equity as they grow.

We'll also continue our work with the city to develop an ongoing Al Fresco program to support community life and businesses as the city emerges from the pandemic.