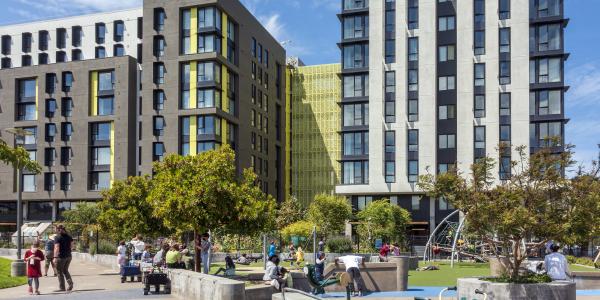 One of the root causes of San Francisco’s high housing costs is the city’s ongoing failure to build enough housing, a problem that’s been compounding for decades. The reasons for this shortfall are many, and solving it will require every tool in the toolbox to eliminate the barriers to development and expedite housing, especially for lower- and middle-income families. A measure that SPUR and others are proposing for San Francisco’s November ballot would take two approaches to building more affordable housing: streamlining the permitting process and deepening the bench of construction workers.

In San Francisco, many housing projects that comply with all of the city’s codes and laws ultimately do not get built because of the lengthy and risky permitting process. A recent study found that the median time frame for approval of housing development projects in San Francisco was 27 months, far longer than any other high-cost California city. For comparison, the median approval time frames were 18 months in San Jose, 14 months in San Diego and 10 months in Los Angeles. This unpredictable approval process translates into higher housing costs because of the added expense of hiring consultants and lawyers to navigate the bureaucracy, as well as the cost of financing the land and other pre-development steps.

Given the severity of San Francisco’s housing affordability problems, it’s imperative that the city take action now to house lower- and middle-income families who are struggling to stay in San Francisco. Numerous efforts to reform the approvals process legislatively have failed, even though polls show that a majority of voters support making it easier to build housing at all income levels. To this end, SPUR has joined a broad coalition of nonprofit groups and elected leaders — including Mayor London Breed, California State Senator Scott Wiener, Habitat for Humanity Greater Bay Area, Nor Cal Carpenters Union, GrowSF, Greenbelt Alliance, Housing Action Coalition and YIMBY Action — to place a voter initiative on the San Francisco ballot for November 2022. The Affordable Homes Now initiative is a charter amendment that would expedite approvals for housing projects that are affordable to lower- and middle-income families.

If passed, the Affordable Homes Now initiative would:

1. Allow eligible affordable housing projects to be approved “by right,” without case-by-case approvals.

2. Ensure that construction workers on eligible projects are paid prevailing wage, and that contractors on these projects are contributing to health care coverage and investing in apprenticeship programs

The ballot measure streamlines the approvals process for multifamily housing proposals if they fall into one of three categories:

Eligible projects would be removed from discretionary reviews and approvals by the Planning Commission, Board of Supervisors, Historic Preservation Commission, Art Commission and Board of Appeals, as long as they comply with all existing requirements in the city’s planning and building codes. Projects that would remove or demolish any existing housing or historic landmark would not be eligible for streamlining.

A common concern about streamlining the permitting process is that removing case-by-case review of new projects could hamper community input on what gets built. SPUR believes that communities should be able to provide input on the locations and types of housing development that are permitted. But we think it should happen through an inclusive participatory process that gets incorporated into the building and planning codes — not as an add on to an already lengthy process. When approvals occur on a discretionary, project-by-project basis, it adds a level of uncertainty and risk that can threaten whether a project makes it to completion.

The workforce requirements of the Affordable Homes Now initiative would incentivize the residential building industry to offer high-quality jobs, while attracting, training and retaining more skilled tradespeople. All of the construction workers who build streamlined development projects of 10 units or more would be paid at least the general prevailing wage. For larger projects with 40 or more units, contractors must: 1) Participate in a state-approved apprenticeship program or request the dispatch of apprentices from state-approved programs, and 2) Provide medical coverage or make contributions to a Healthy San Francisco medical reimbursement account.

San Francisco’s housing affordability crisis requires a host of strategies, including accelerating housing production. SPUR recognizes that reforming the lengthy and complicated approvals process is not sufficient on its own to address all of the housing challenges in the city. However, expediting approvals for housing that is affordable to lower- and middle-income residents is a simple way to deliver more housing more quickly and at a lower cost to families that are increasingly priced out of the San Francisco and the greater Bay Area. SPUR looks forward to further conversations with our members, stakeholders and the wider community about the Affordable Homes Now initiative, as well as other policies to help solve San Francisco’s housing affordability crisis.