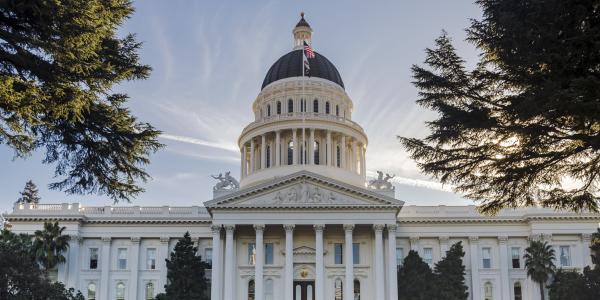 For the second year in a row, California will have a sizable budget surplus — $45.7 billion to be exact, $20.6 billion of which is available for discretionary spending. And as pandemic recovery continues, there are a host of critical needs to be funded. Governor Newsom’s proposed budget spending plan continues to include significant investments in affordable housing and solutions to homelessness. SPUR is especially pleased to see a strategy that makes an explicit link between locating housing in urban areas and reducing climate change, a key idea in our Civic Vision for Growth.

Housing as a Climate Strategy

The proposed budget’s section on housing says “California’s housing and climate goals must be intertwined” and expresses a commitment to encourage housing near jobs, schools and services in order to reduce carbon emissions from driving. The Newsom Administration is particularly focused on dense, urban infill development as a key climate strategy and proposes to make $1 billion in targeted investments from the state’s General Fund over two years “primarily focused on accelerated development in downtown-oriented areas across California.”

The proposed budget allocations include:

Recognizing that there are infill development opportunities in more suburban and rural population centers, as well, budget trailer bill RN 22 07644 would authorize HCD to make grant awards to small jurisdictions with less than 250,000 in population. The bill would reduce the amount of the perimeter of a site that must adjoin parcels that are already developed with urban uses from 75% to 50%.

The proposed budget also includes $100 million over two years for adaptive reuse incentive grants that would remove the cost barriers to repurposing commercial and other buildings as housing, with a priority on projects located in or near downtown areas.

This one-time general fund commitment over two years would be in addition to the existing cap-and-trade proceeds that fund this California Strategic Growth Council program (implemented by HCD). The program helps finance projects for infill and compact development that reduce greenhouse gas emissions.

The Governor’s proposed budget also includes another allocation of $500 million for the state’s Low Income Housing Tax Credit program and $100 million to prepare state excess land sites for the development of affordable housing.

The budget also notes that the $2.75 billion two-year commitment in last year’s budget for HCD’s Homekey program — which finances the acquisition and conversion of hotels, motels and other buildings to housing for those experiencing homelessness or at risk of homelessness — includes $1.3 billion in expenditures for fiscal year 2022–2023.

While these allocations are certainly significant, there is more that can be done through the budget to keep production moving on subsidized, deed-restricted homes for low-income households.

Affordable housing advocacy organizations such as the Non-Profit Housing Association of Northern California are calling on the Governor and Legislature to include in the final budget additional investments in HCD’s Multifamily Housing Program. The funding for that program in the Proposition 1 affordable housing bond of 2018 has been spent, and the entire $1.75 billion in last year’s budget for the new and highly successful California Housing Accelerator will be fully awarded within the next few months. The advocacy groups are also seeking, among other budget requests, ongoing funds for operations and resident services for buildings that have been converted to housing through the Homekey program.