By Alicia John-Baptiste and Jim Chappell 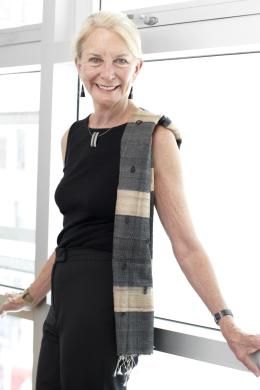 Long-time SPUR Board Member and former Board Chair Anne Halsted, one of the organization’s great champions and a vital civic leader in the San Francisco Bay Area, passed away on March 13.

And those are just the government appointments. Anne also devoted countless hours to a wide variety of voluntary and community groups. Nationally, she was on such groups as Business Executives for National Security. Locally she was an early president of the Telegraph Hill Dwellers, the board of People for Open Space, the board of Friends of the Urban Forest and twice board president of the City Club. She sat on the boards of the Institute on Aging, the San Francisco Maritime National Park Association, the International Institute, Chinatown Community Development Corporation, the Neighborhood Parks Council, North Beach Citizens, the Women’s Campaign Fund and the Legal Aid Society. She also served for many years on the board of the Greenbelt Alliance.

For 40 years, Anne was deeply involved with leading SPUR. In the 1970s, Anne became involved in neighborhood zoning and traffic issues around the northern waterfront, as well as in city-wide parks and open space planning. Through her community activism she met Dorothy Erskine, who had led the evolution of the former San Francisco Planning and Housing Association into SPUR in 1959. It was Dorothy who first encouraged Anne to join SPUR, and in 1983, Anne was asked to join the SPUR board of directors. In San Francisco, these years were characterized by battles over downtown growth vs. neighborhood protection, debates where Anne helped SPUR find a middle ground that worked. In her roles first on the Redevelopment Commission and then as the president of the Port Commission, she helped give SPUR added standing to assist city departments as an advisor in both specific project execution and general good government operations.

During the 1980s, and again in the early 1990s, SPUR led efforts to reform San Francisco’s dysfunctional 1932 city charter. After a proposed “ideal charter” failed at the November 1994 ballot, SPUR thought it had closed the file on the project for a while. But soon thereafter, Barbara Kaufman, chair of the Board of Supervisors, called Anne and SPUR Executive Director Jim Chappell to a meeting where she said she wanted SPUR to write another charter — this time not the perfect charter, but one that would pass at the ballot. Jim and Anne looked at each other, their eyes each saying, “This is crazy.” But their voices said “Yes.” Anne was in her element, making decisions with laser focus on the good governance of the city. SPUR then wrote a charter measure that passed and went into effect in July 1995, creating the system of governance that San Francisco enjoys today.

Anne’s great love was the San Francisco Bay. The Waterfront Land Use Plan, initially adopted by the San Francisco Port Commission in 1997, would not have happened as it did without Anne’s big-picture overview. For six years, she and SPUR provided technical planning expertise to the process, well beyond what the Port could have achieved on its own. That plan generated hundreds of millions of dollars in public and private investment along the San Francisco waterfront, and resulted in a beautiful boulevard and public promenade.

In addition to her great love of the Bay and the waterfront, Anne worked tirelessly at SPUR on parks and open space issues. In 1997, she formed a partnership with the Neighborhood Parks Council, bringing together 200 concerned citizen leaders to diagnose and prescribe ways to bring about a parks renaissance in San Francisco. The 1998 report was a call to action on new ways to manage, fund and operate the city’s public park system. In the years since then, Anne led SPUR’s efforts on neighborhood parks issues, Golden Gate Park planning, the redesign and rebuilding of Union Square and the conception of the Blue Greenway, in partnership with the Neighborhood Parks Council. A dozen years later, Anne again worked to help SPUR form another community task force to analyze and prescribe funding solutions for San Francisco’s parks system.

There is not a major SPUR project that Anne was not involved in, including the conception of the Presidio Trust, military base reuse planning for Treasure Island, the design of the Embarcadero and Ferry Plaza, planning for Chinatown and the Downtown Plan, to mention a few.

While she was advising and working on these and other projects, Anne was doing something that was perhaps even more important for SPUR: building the necessary institutional infrastructure for the organization to grow and thrive — both at the time and beyond her terms as a board member and board chair. This included getting the organization on solid financial footing, building the staff and the board, and developing the staff and board cultures that have served SPUR well. Anne’s professional background in human relations, combined with her caring, gentle personality, were ideally suited to rebuilding a small organization into the powerhouse that SPUR is today. Lessons she imparted to staff included:

In 1999 the board began planning for the creation of a permanent home for SPUR — a project that ultimately became the SPUR Urban Center. The goals of the Urban Center were to give SPUR the financial stability of owning its own home, to increase the visibility and stature of the organization, and to “take planning retail” by moving from an upstairs office to a transparent, sidewalk-level space. Anne worked tirelessly for the next 10 years to make the Urban Center a reality.

The 2000s was a time of rapid growth for SPUR. There were new activities where Anne’s talents shined, such as SPUR’s annual city tours, starting with a study trip to Vancouver in 2003. In every case her goal was to have fun and to educate. In her most recent term on the SPUR board, Anne helped guide the organization through a leadership transition and served as a thoughtful voice in SPUR’s efforts to center equity in its policy work. In total, Anne served on the SPUR board for nearly 35 years.

In her marvelous oral history by the University of California Bancroft Library, Anne said she pursued three themes to improve community:

Anne has created a lasting legacy both at SPUR and throughout the Bay Area. She will be deeply missed by all who have known her.